Mairis Briedis: ‘Oleksandr Usyk is a dream opponent to test yourself against’ 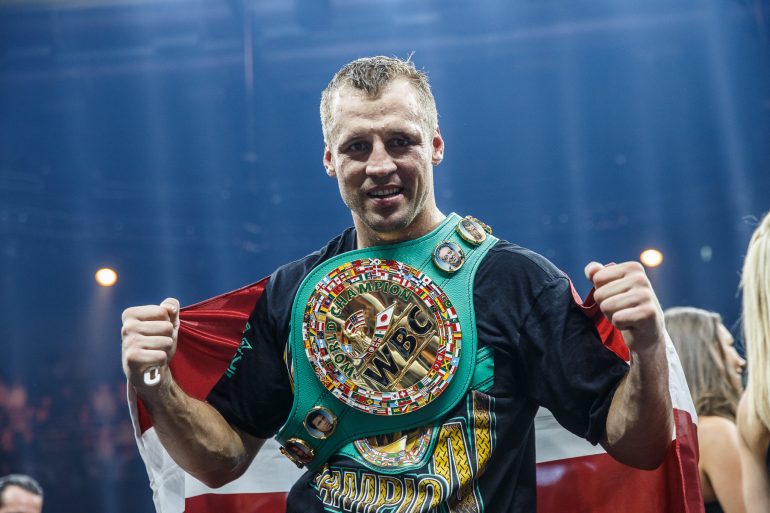 Although Briedis (23-0, 18 knockouts) has home advantage, Usyk (13-0, 11 KOs) is a sizeable -800 (1/8) favorite in this battle of unbeaten champions. But Briedis, who recently turned 33 years old, feels the matchup has been a natural ever since both men arrived at world level.

“Sooner or later, if we both kept winning, the fight was inevitable,” Briedis told RingTV.com through his advisor Al Siesta. “The WBSS semi-final is a perfect opportunity to host such a clash. I like the fight, so I embrace the challenge.”

Both men’s careers have taken very different paths to this point.

Usyk, who is rated No. 1 by THE RING at 200 pounds, was a stellar amateur who won gold at the 2012 London Olympics. He turned professional a year later and fast tracked his way to a world title in September 2016. Since then, the  31-year-old Ukrainian has made three successful defenses.

Briedis, who is rated No. 3, turned professional in 2009 with none of the fanfare Usyk enjoyed. However, he slowly and deliberately learned his trade in gyms around Eastern Europe and transformed into an adept boxer-puncher.

While respectful of Usyk’s skillset, Briedis remains confident of victory.

“So far it doesn’t look like he has any weaknesses,” he said. “Usyk is a dream opponent to test yourself [against].”

When Briedis beat Huck in April 2016, he became the first Latvian male boxer to become world champion. It was an emotional moment for the usually reserved fighter.

“It was a bit surreal but at the same time long-awaited,” Briedis explained. “I am very proud to be the first ever Latvian to win a world title in boxing, let alone the WBC one.

“Winning is one thing but defending and keeping the belt is a whole different challenge.”

After agreeing to participate in the inaugural WBSS tournament, where he was seeded No. 3, Briedis selected long-time heavyweight contender turned cruiserweight Mike Perez as his quarter-final opponent.

The fight took place in Riga before a raucous sell-out crowd of 9,000. Briedis retained his title via 12-round unanimous decision in an often-scrappy affair. Against Usyk, he will enjoy home advantage once again.

“I’m happy that I’m fighting at home,” Briedis said. “I love to feel [the] support of my fans. It’s great that we are fighting in Riga.”

Fighting away from home is nothing new for Usyk and he is unlikely to find it unsettling. The experienced Ukrainian fought all over the world as an amateur and won the WBO belt from Krzysztof Glowacki in Poland. He also defeated WBSS quarter-final opponent Huck in Germany.

“Usyk was prolific as usual,” he said. “His win was very impressive. I want the best Usyk for (January 27).”

Briedis’ advisor, Siesta, with the help of a local businessman, who put up close to a million euros to stage this fight, have worked tirelessly for the past two months.

“[We’re] incredibly pleased with the opportunity,” said Siesta. “So far so good, but now we’ve got a No. 1 cruiserweight standing in our way. I can’t wait for Mairis to show the world how great he really is.

“It was very easy [to make the deal]. My good friend, who’s been helping us to support Mairis’ career, asked me to find out about what it would take to bring this fight to Riga. I told him the conditions and he wrote the check the next day. There are some great people in this world.”