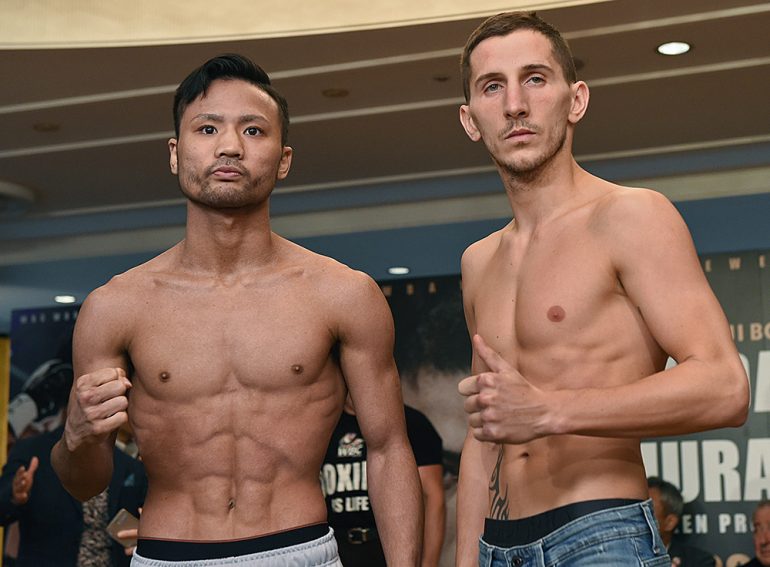 Daigo Higa (left) alongside Thomas Masson at the weigh-in for their Oct. 22 fight. (Photo by Naoki Fukuda)
22
Oct
by Ryan Songalia

Higa (14-0, 14 knockouts) dazzled from the outset, finding holes in the Frenchman’s guard as he banged away with combinations from various angles. The pressure started to get to Masson (17-4-1, 5 KOs) by the fourth as he was rocked back into the ropes to begin the round. Higa continued to find the mark, connecting with four straight left uppercuts between the guard.

The fight grew more one-sided from there as Higa hurt Masson with a left hook he never saw coming to the body, doubling him over and sending him into the ropes. Higa’s ability to throw four or five punches with the left hand, then use the same glove to knock Masson’s guard away to open him up for a right hand made it difficult for Masson to regain his composure.

The fight came to a halt just over a minute into the seventh round after Masson took a knee following a left to the face. Masson and referee Tom Taylor made a visit to the ringside doctor in a neutral corner and seemed to be hinting at damage to his right eye, prompting the fight to be called off.

It was yet another destructive performance for the 22-year-old Higa, who won the title in May by pummeling Juan Hernandez over six rounds.

Shiro opened up cuts over both of Guevara’s eyes in the middle rounds.

The title fights were preliminary fights before the rematch between 2012 Olympic gold medalist Ryota Murata and Hassan N’Dam (result here).