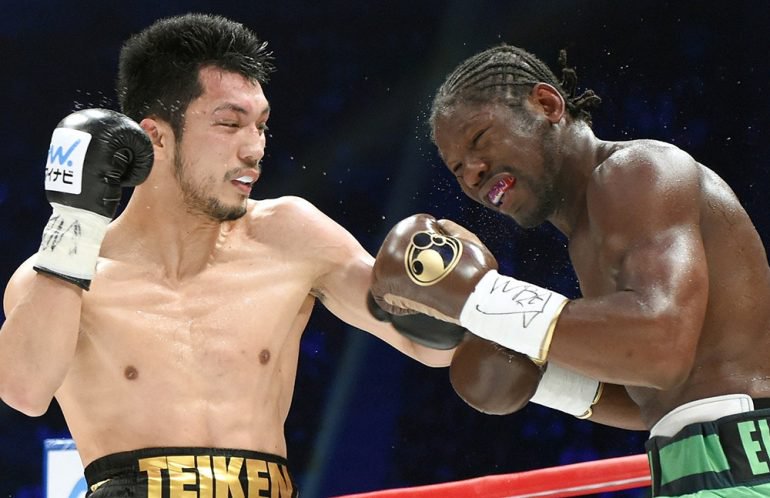 This time, Ryota Murata didn’t leave it in the judges’ hands.

The Japanese middleweight, a 2012 Olympic gold medalist, avenged his dubious split-decision loss earlier this year, battering Hassan N’Dam around the ring and prompting N’Dam to remain in his corner after the seventh round on Sunday at Ryōgoku Kokugikan Sumo Hall in Tokyo, Japan.

“I was surprised at the way the fight finished but I knew he was feeling the pace and wanted to finish the job quickly,” Murata was quoted by Agence France-Presse. “We were both pretty tired so it’s a bit lucky he stopped. But there was no way I was going to lose that fight.”

Murata (13-1, 10 knockouts) picked up where he left off last May, landing heavy right hands and mixing in effective left hooks to the body of the France-based Cameroonian N’Dam (36-3, 21 KOs), who was stopped for the first time as a pro. Unlike their last fight, there were no knockdowns, though N’Dam showed signs he was hurt in just about each round, particularly in the sixth, when his legs buckled from a right cross from Murata, who is two years N’Dam’s junior at 31.

N’Dam’s legs looked weak for much of the fight, and he spent much of his time in the last few rounds circling away from danger. The final punch that Murata landed was a left jab that knocked N’Dam’s head back.

“After the first couple of rounds, I had no more strength left,” said N’Dam to AFP.

“Murata put me under more pressure than last time and threw more punches. I congratulate him and hope we can fight a third time.”

The stoppage win gives Murata closure after their first fight saw two judges score the fight for N’Dam, a verdict so indefensible that it left WBA president Gilberto Mendoza “embarrassed” and prompted him to suspend those two judges – Hubert Earle and Gustavo Padilla – for six months. The other judge had it more in line with the mainstream view, awarding it 117-110 to Murata.

It also gives Murata the WBA “regular” middleweight title, which is a tier below the WBA title currently held by Gennady Golovkin at 160 pounds.

The outcome left a smile on the face of promoter Bob Arum, who handles Murata alongside Teiken Promotions. Arum had suggested prior to the fight that Murata could face Brazilian Esquiva Falcao, whom Murata beat in the gold medal match in 2012. Falcao (18-0, 12 KOs) is also promoted by Top Rank.

Earlier in the night, Daigo Higa retained the WBC flyweight title with a seventh-round stoppage of Thomas Masson, and Ken Shiro won a majority decision (116-112, 115-113, 114-114) over Pedro Guevara to hold on to the WBC junior flyweight title.