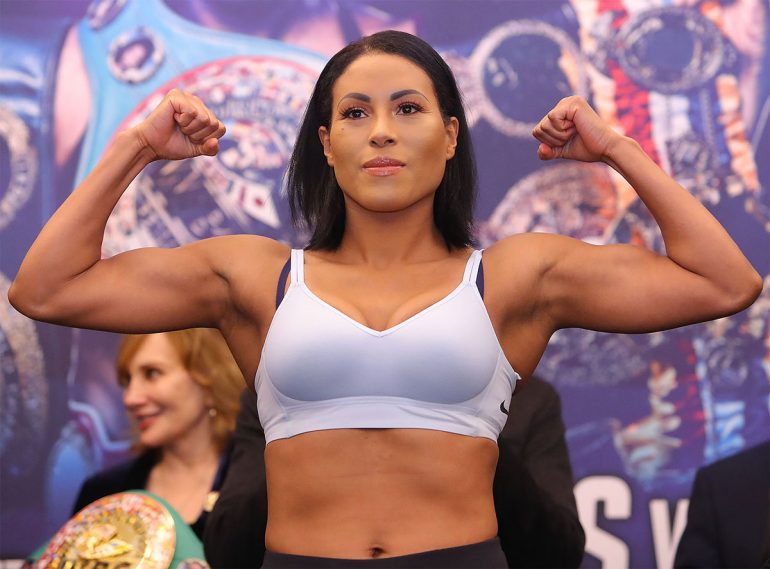 Cecilia Braekhus at the weigh-in for her December 2018 fight against Aleksandra Lopes. (Photo by Tom Hogan/Hoganphotos)
16
Dec
by Francisco Salazar

Cecilia Braekhus is not letting any setbacks stop her from moving forward with her career.

The former No. 1 pound-for-pound female fighter will return to action Saturday night as she squares off against Marisa Joana Portillo at the Commerce Casino in Commerce, California. The six-round junior middleweight bout will be part of the Golden Boy Fight Night: LA Edition card that will stream live on DAZN (9 p.m. ET/ 6 p.m. PT).

The 41-year-old (36-2, 9 knockouts), who resides in Bergen, Norway, is a former undisputed welterweight champion, suffering her first loss by majority decision at the hands of Jessica McCaskill in a close fight in August 2020. Braekhus then lost the rematch on March 13 of last year, this time by wider scorecards, and has not fought since.

Braekhus won her first world titles (WBA and WBC welterweight) in March 2009 and made an astonishing 25 consecutive defenses, picking up the IBF and WBO belts along the way.

Two of her defenses of the undisputed championship took place in nearby Carson, California — one of them on the final episode of Boxing After Dark, which marked HBO’s exit from covering the sport after 45 years. Braekhus, who was the first female fighter to headline an event on the premium network, is glad to be back in action, particularly in the Los Angeles area, where (as well as in Detroit and Dubai) she has been preparing with trainer Johnathon Banks.

“This (junior middleweight) is a new weight class for me after spending my whole career at welterweight, and I’m anxious to make my mark quickly towards world title fights,” she said.

Braekhus’ last several fights have been promoted by Tom Loeffler, who is well-known for his work with Gennadiy Golovkin and the Klitschko brothers.

Portillo (19-15-3, 4 KOs), who resides in Rosario, Argentina, last fought on May 14, defeating Elizabeth Britos by unanimous decision. The 34-year-old has lost six of her last nine fights.

In the main event, welterweight prospect Raul Curiel (11-0, 9 KOs) of Guadalajara, Mexico, will square off against former contender Brad Solomon (29-5, 9 KOs) in a 10-round bout.