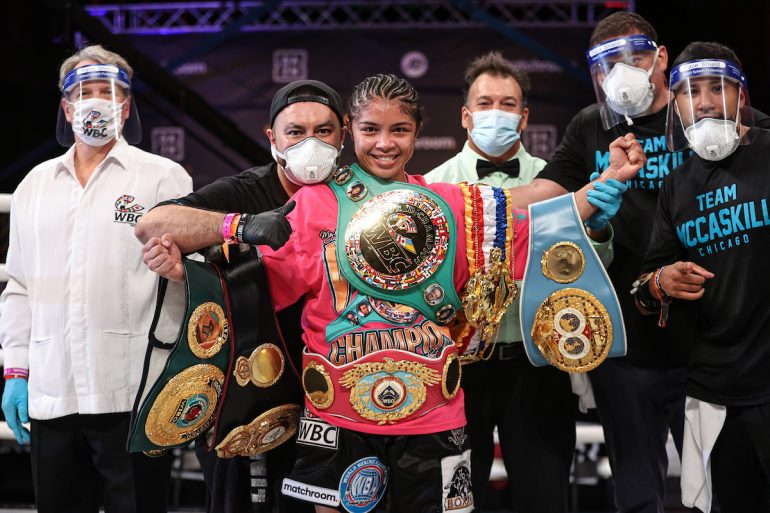 From the pits of homelessness to the pinnacle of women’s boxing.

Jessica McCaskill has spent her entire life overcoming the odds. On Saturday, she outpointed long-reigning and previously undefeated world champion Cecilia Braekhus on the streets of Tulsa, Oklahoma, to become the undisputed welterweight champion of the world in an upset.

McCaskill won via majority decision. Judge Karen Holderfield had it 95-95. But she was overruled by David Southerland and Gerald Ritter, who scored the fight 97-93 and 97-94, all for McCaskill.

McCaskill, who is also a unified champion at junior welterweight, was all emotion after the most significant victory of her career.

“This is the fourth (grader) homeless Jessica,” McCaskill said. “This is for the little girl that just didn’t care what people thought about her and learned to love herself even though she was really weird.

“And for me the now that just sacrificed everything to put this sport first and to make a difference, that’s what that fight was about.”

McCaskill came out firing in the opening round, connecting with an overhand left. Braekhus landed with a short left hook late in the round and found success with a right over the top. 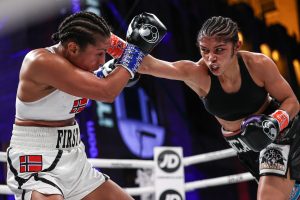 The frantic pace livened up in the second frame. McCaskill connected with three right hands on the inside. Braekhus then landed with a left-right combination before the bout shifted to the outside.

Braekhus, who was one win away from numerically breaking the long-standing record of 25 consecutive title defenses previously set by the late Joe Louis, looked for spots to land her jab, but McCaskill continued to come forward and smother her on the inside, connecting with a few lefts.

The third was a tightly contested round. Both combatants had their fair share of success, but Braekhus was starting to swell on both cheekbones.

The slugfest continued in the fourth round with Braekhus landing with the cleaner shots between the two.

McCaskill gave Braekhus hell in the fifth frame, tying her up on the inside with a series of overhand lefts. She also followed up with a big overhand right that bothered Braekhus, who then finished the round with a one-two combination.

Braekhus had a strong performance in the sixth round. With about 50 seconds remaining in the sixth round, she connected with a sharp right hand, and fought more effectively from the outside when she used her jab, which was sporadic at best. However, McCaskill walked through her best punches, and snuck in an overhand left.

With the rounds winding down, Braekhus had her best performance of the night, as she created distance between herself and McCaskill, connecting with a crisp right uppercut on the inside.

The self-proclaimed “First Lady” controlled the pace in the eighth frame. But McCaskill had her moments when she closed the distance and landed with short rights on the inside.

After a sluggish start to the fight, the 38-year-old Braekhus had finally woken up. She stung McCaskill with a sharp counter right hand that clearly got her opponent’s attention.

With less than a minute left in the ninth round, Braekhus landed with a three-punch combination. She then followed up with a left-right combination as McCaskill’s gas tank began to show signs of wear.

Both women slugged it out to the finish, but it was Braekhus who landed the cleaner of the punches. However, it was not enough to sway the judges, as she suffered her first pro loss in 37 fights.