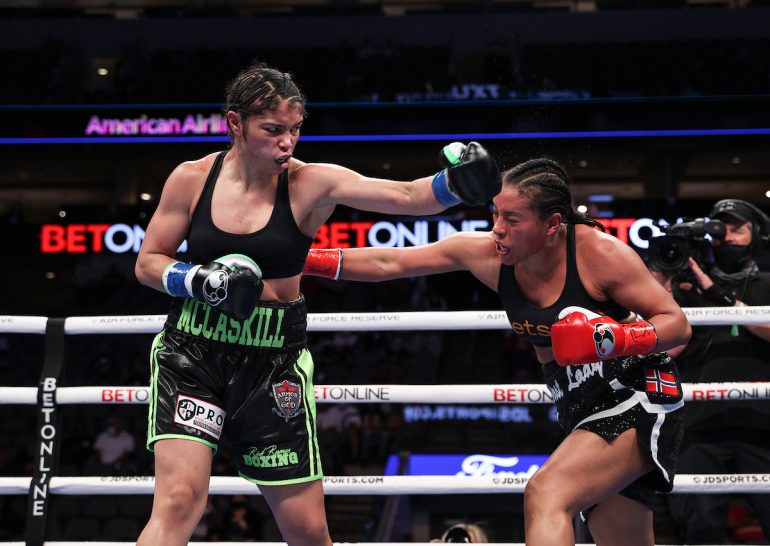 DALLAS – Jessica McCaskill made it 2-0 against future hall of famer Cecilia Braekhus, defending the undisputed welterweight championship on Saturday at the American Airlines Arena, but this time the rugged Chicagoan made it clear that she’s the better fighter.

McCaskill (10-2, 3 KOs), who won their first meeting with a disputed majority decision, landed her overhand right at will for 10 fast-paced rounds, repeatedly knocking the defiant 39-year-old veteran off balance en route to a lopsided unanimous decision. With the victory, via scores of 100-89, 99-90 and 98-91, McCaskill retained all four major titles (WBA, WBC, IBF and WBO) and won the inaugural Ring Magazine championship.

Braekhus (36-2, 9 KOs), who had been trapped at her Big Bear, California training camp prior to the first match due to the COVID-19 lockdown, had better preparation for this rematch but despite exhibiting improved technique she was unable to contain McCaskill’s forward march and unpredictable haymakers. 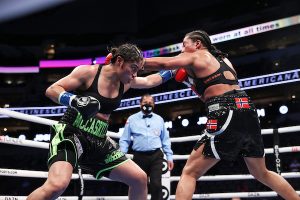 Braekhus was unable to land her jab with consistency (although she tried) or hurt McCaskill with any of the straight rights or counter uppercuts that she landed. McCaskill’s unorthodox style, which doesn’t rely on the jab, clearly threw Braekhus off her game, and her overhand right was once again the key punch to establishing ring generalship.

Braekhus, a resident of Bergen, Norway, said she doesn’t plan to retire after her second setback, but it’s clear that she’s no longer the world-beater she was during her extended prime years from 2009, when she won her first world titles, through 2016.

Braekhus was the undefeated and undisputed welterweight champion from September 2014 until her loss to McCaskill.

McCaskill is now one of the premiere talents in women’s boxing. A lucrative rematch with undisputed lightweight champion Katie Taylor, perhaps at a 140-pound catchweight, is an option for the 36-year-old two-division champ.

MaCaskill challenged Taylor for the WBA lightweight title in her seventh pro bout, dropping a 10-round decision in December 2017, but she rebounded to win the WBC 140-pound belt by outpointing Erica Farias in her very next fight in October 2018. She unified WBC and WBA 140-pound titles with a decision over Anahi Sanchez in May 2019.