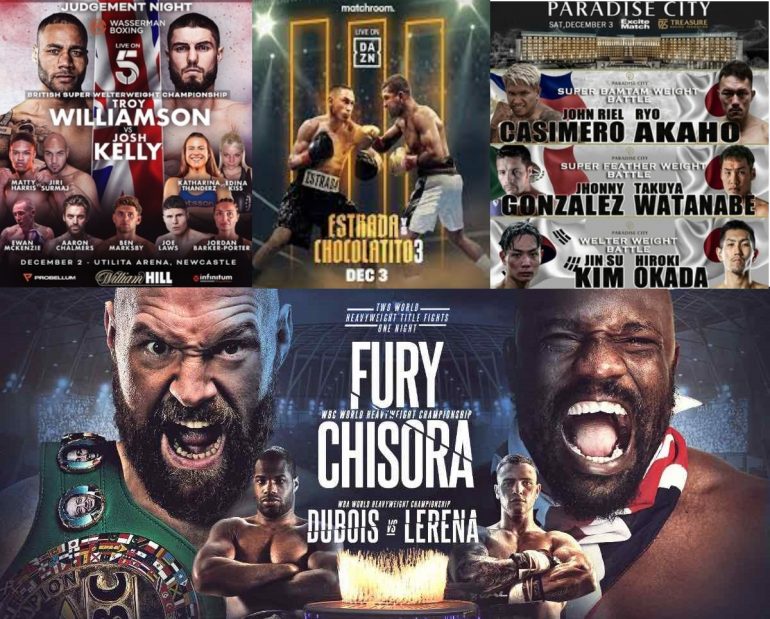 An intriguing battle of unbeaten prospects, with a few showcase bouts for other fellow unbeaten promising young guns in the undercard.

Kelly is on the comeback trail after losing to David Avanesyan in his first major step-up fight, and the tough but largely untested Williamson seems to be the right opponent for him at this stage, with the British title at stake to make things even more interesting.

A solid matchup for Arthur, who is on recovery mode after being stopped in his rematch against Anthony Yarde and is now looking forward to make it a trilogy in the future. Upset-minded McIntyre should be a solid test ahead of that challenge.

This always loquacious pair are a promoter’s dream. They fought twice already and Fury got the nod both times, but that’s not going to stop them from giving us another entertaining fight.

Intriguing clash of once-beatens who desperately need a win to stay alive in the suddenly crowded heavyweight picture. Expect bombs and fireworks.

Be glad you’re alive to witness this golden era of the lower weights. This rubber match for the ages is the one fight you shouldn’t miss if you’re a true boxing fan.

“El Rey” Martinez is the next big thing among the not-so-big boxers of today. We should enjoy him while we can, and he still has a long career ahead of him. Lucky us.

Two battle-hardened veterans co-headlining a card in the Far East against respectable opponents? Should be a good one.