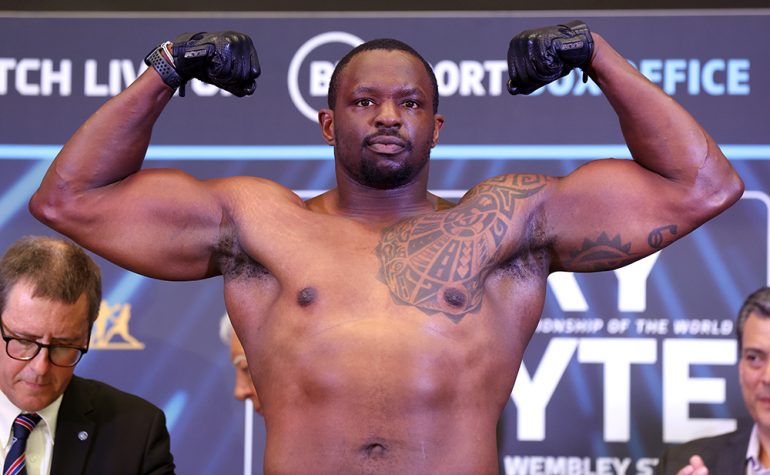 Whyte flexes at the weigh-in for his ill-fated encounter with Tyson Fury in April 2022. (Photo by Julian Finney/Getty Images)
21
Nov
by Anson Wainwright

Perennial heavyweight contender Dillian Whyte will return for the first time since he was stopped by WBC titleholder Tyson Fury when he faces Jermaine Franklin at the Ovo Arena, London, England on Saturday.

Whyte, who is rated No. 5 by The Ring at heavyweight, welcomes the opportunity to get back into action.

“I’m looking forward to getting in there and sharing a ring with another undefeated, dangerous heavyweight,” Whyte (28-3, 19 knockouts) told The Ring. “He’s busy and has good handspeed, he’s not a bad boxer, he’s well-schooled. The guy is saying the right things, he’s doing the right things.

“He’s come over to England six or seven weeks ahead [of the fight.] He’s taken his training camp seriously. He’s left his comfort zone and family. He’s sparring Tyson Fury — he thinks he has some kind of mental edge because Fury defeated me. He’s saying he’s going to knock me out, so I’ve got to take this fight seriously.” 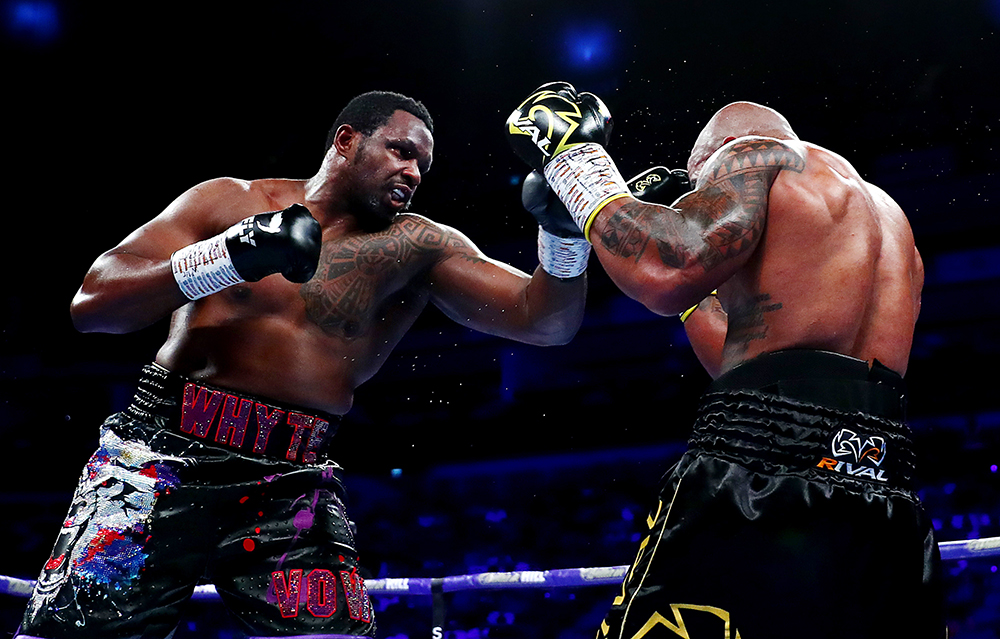 The 35-year-old has changed a few things in camp in the wake of his loss to Fury. He has tasked renowned trainer Buddy McGirt with bringing him back.

“Me and Buddy, we’re cool. It’s like we have known each other for a long time; there’s mutual respect there,” Whyte said of his new union with the two-weight champion-turned-trainer. “I listen to him. [We’re] working on a few things, trying to tighten up a few things.”

Whyte pays no attention to naysayers who cast doubt on whether he has seen better days. He says he is motivated to climb back to the top of the mountain and earn another title opportunity.

“I don’t give a shit. They can think whatever they want; that’s up to them,” he said. “This is what sports all about — the comeback. Winning is great, but can you come back? Can you rise against the odds? That’s what makes sports great.

“I’m a few months older and wiser. I’ve got a real bee in my bonnet. I want to get back to the title, and hopefully Fury still has the title and I have a rematch with him.”

Although Whyte was dominated and then stopped by Fury, he believes a rematch is possible. 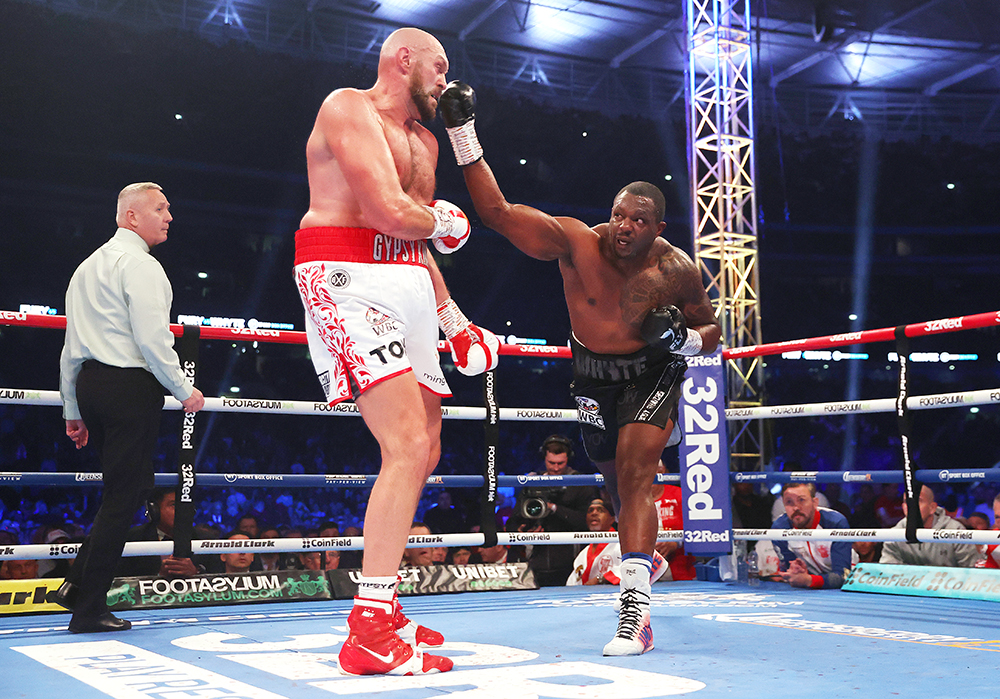 “Definitely. This is heavyweight boxing; one or two fights and you’re right back there,” he said. “People want to see heavyweights, and there aren’t a lot of good, exciting heavyweights around anymore. Thankfully, I’m one of the few that’s around.”

He freely admits the loss to Fury was a bitter pill to swallow, but he has come to terms with the loss.

“I’m a warrior, and every warrior knows you can’t win every battle,” he said. “You try and you give it your all and a defeat sucks and will forever suck. The good thing is I can definitely come back and try to beat this man. Get your shit together and let’s have another run.”

And he expects that comeback to begin against Franklin this weekend.

“When I beat Jermaine Franklin, definitely [Anthony Joshua] will be one of the targets because Joshua is one of the biggest fights out there,” said Whyte. “If I’m not going to fight Fury [next], [Deontay] Wilder’s not going to fight me, because Wilder’s a bitch. Joseph Parker’s coming off a loss, so there’s no point going in against him. A [Joe] Joyce fight makes no sense to me right now. If he wins a title, it makes sense. Joe Joyce is a good fighter, a strong fighter and dangerous fighter, but he has no real charisma; it’s like trying to build a fight a with a piece of wallpaper. So why not fight Joshua? It’s a major fight; it’s still two of the top 5 fighters fighting in the world. It would set the winner up for a big title fight as well.”

Whyte still believes he has more big nights in him and that he can reach the top.

“[I want] to be world champion and get back those two defeats that I’ve had,” he explained. “I got one back (against Alexander Povetkin). I need to get the other two (Joshua and Fury) back.”

The London-based fighter will be intently watching two of his old rivals collide on December 3, when Fury and Derek Chisora face off in London.

“Most betting people will bet on Fury; he’s beaten him twice and Fury is on a high right now, Derek’s coming off a high beating [Kubrat] Pulev,” said Whyte. “A lot of British fans would like to see Derek get the job done. He’s a cult hero. He’s showing some resilience to have all those defeats — [Oleksandr] Usyk, Parker twice — and then come back and fight Pulev and keep hanging in there. You have to respect the guy; he’ll fight anyone. It’s crazy what he’s done, how he’s stuck around.”

Like the rest of us, Whyte is bemused by Fury-Joshua failing to materialize.

“I can’t understand why the fight didn’t happen,” he said of the potential megafight, which never made it past negotiations. “If it happens, I think it’s a 50/50 fight. The one thing Joshua does possess is punch power. And the high advantage isn’t so much in Tyson Fury’s favor, and that’s what has got him out of trouble fighting these shorter guys, and Joshua can punch.” 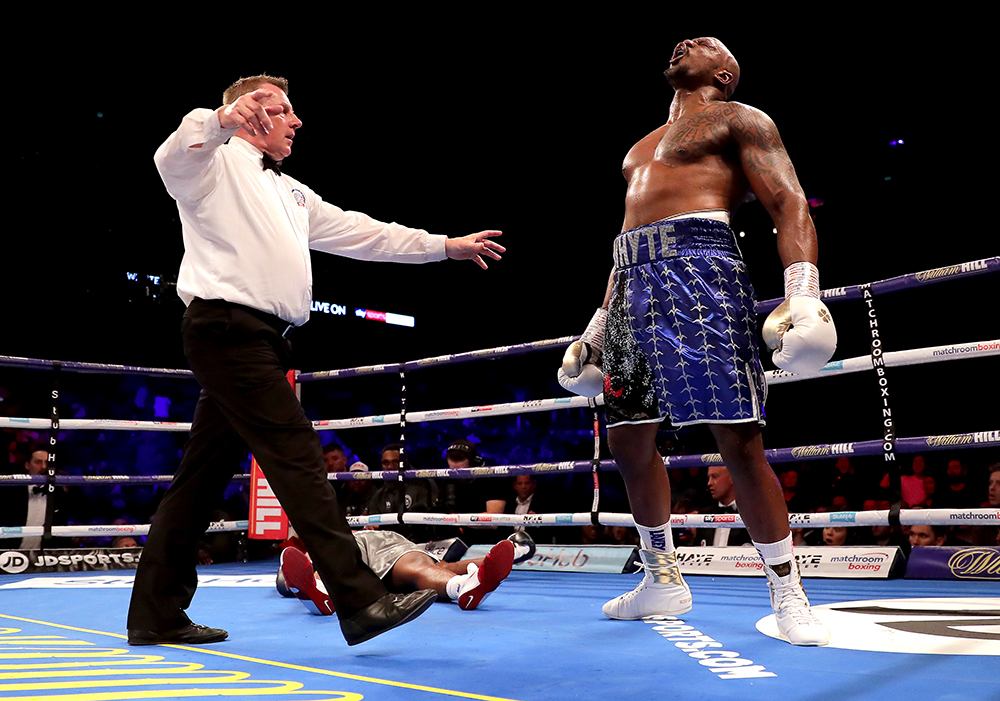 Franklin (21-0, 14 knockouts) won the Golden Gloves in 2014 before turning professional the following year. The 28-year-old technician from Michigan used his skills to outbox fringe contenders Rydell Booker (UD 10), Jerry Forrest (SD 10) and Pavel Sour (UD 10). He was inactive for just over two years due to the pandemic but returned to stop Rodney Moore (TKO 5) in May.