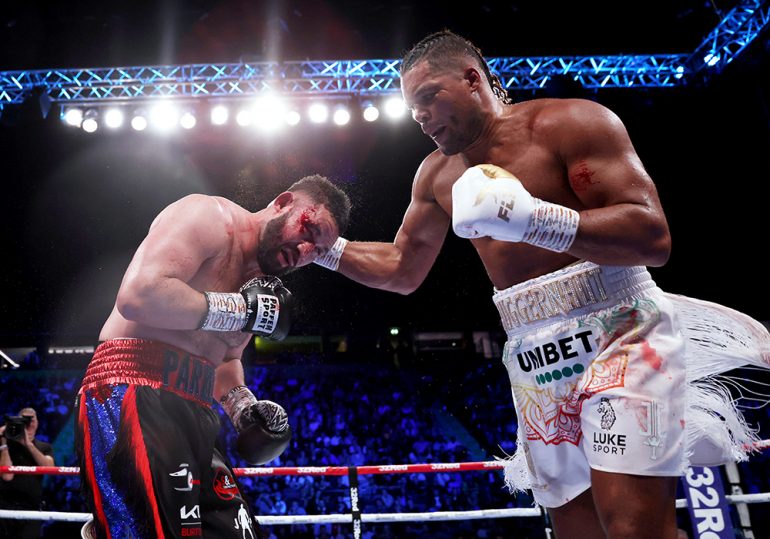 British heavyweight star Joe Joyce collected the biggest win of his career to date by scoring a spectacular 11th-round knockout over former titleholder Joseph Parker at the AO Arena on Saturday. The official time was 1:03.

Joyce, who entered as The Ring’s No. 6-rated heavyweight, turned in an extremely good performance and closed out with a vicious left hook that sent Parker sprawling into the Brit’s corner. Hurt badly, the New Zealander gamely tried to rise but was counted by referee Steve Gray.

“What a fighter Joseph Parker is,” said Joyce (15-0, 14 KOs) during his post-fight interview with BT Sport. “I really enjoyed it and it was tough in there. I had to dig deep. I hit him with everything in the kitchen sink.”

The opening round was strong for Parker, who backed up the bigger man and displayed nice lateral movement. However, Joyce went up a gear in the second and forced the former WBO titleholder to work hard for three minutes. Parker was trapped in the corners several times and the suffocating presence of Joyce looked ominous early.

The third was a brilliant round of heavyweight action. Joyce continued to back Parker up and nail him with the jab and hammering hooks from both sides. Parker, almost tired of being hit, responded with some heavy body shots and the right uppercut was also a memorable shot throughout the session.

Parker, 30, could land but he just couldn’t cause damage. Massive, full-blooded shots landed flush and the super-durable Joyce walked right through them. The visitor had to pick his moments to land the right because Joyce’s chin is incredible and his suffocating attacks were taking a toll.

The seventh was another punishment packed round. Joyce increased the pressure and put more punches together to head and body. Parker was clearly winded and on the retreat and his problems were compounded when a nasty cut opened up over his right eye.

Joyce was now landing two or three times more punches and Parker was running out of energy. Game as always, Parker found some nice shots on the backfoot, but the eye cut was a serious distraction.

One moment in the ninth was the entire fight in microcosm: Parker walked Joyce into a perfect right uppercut at center ring and before you could say “nice shot,” the visitor was hammered by a pulverizing right that sent him back into the ropes.

Parker (30-3, 21 KOs) gamely stood up to the best Joyce could offer and the shot that ended the fight would have finished most heavyweights.

Joyce, 37, is unquestionably one of the best heavyweights in the world today. The only downside is his advancing years. Ideally, the colossal Londoner would be looking for a world title shot in 2023, but the division is currently on lockdown. Joshua versus Fury versus Usyk, plus potential rematches, could easily leak into 2024.

Speaking of rematches, Joyce and Parker are contractually obligated to fight again in December. If if the return fight goes ahead, that will keep the pair busy while the never-ending road to undisputed plays out.

Both fighters weighed in heavier than at any point of their respective careers. Joyce was 277.25 pounds, while Parker tipped the scales at 255.25.