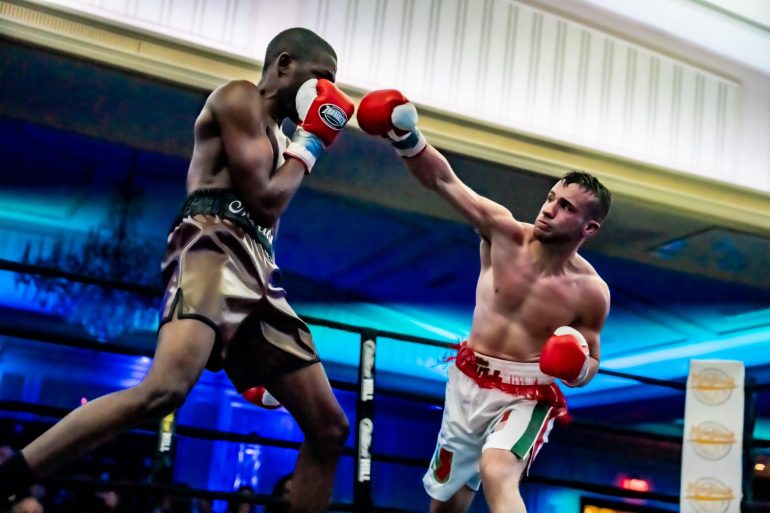 Nicky Vitone (right) fires a right hand at Llewelyn McClamy in his most recent bout. Photo by Samad Haq
19
May
by Ryan Songalia

On Thursday night, Nicky Vitone boarded a 16-seat school bus, along with his head trainer Joe Zabry and stablemate Steve Moore, and made the red-eye drive from their training base in Boonton, N.J. to Atlanta, Ga. for a pair of six-round fights to take place this Saturday at the Buckhead Fight Club. The bus ride works out for the fighters, since it eliminates hotel costs and gives them more room to stretch out than a car, but it’s still a significant time commitment for a fighter campaigning in his tenth pro fight.

The 14-plus hour drive is worth it for the junior welterweight known as “Nicky The Bull.” To him, boxing is more than just a sport.

“Boxing is everything to me. It’s who I am. I tried to do other things but everything brought me back to the beautiful sport of boxing,” said Vitone (7-1-1, 6 knockouts) of Montville, N.J. He will face Raymond Chacon (8-49-1), while Moore faces Matthew Knauss (1-9, 1KO).

Boxing is in Vitone’s heart, but it’s also in his blood. Boxing stretches back to his great grandfather, a son of Italian immigrants who took up amateur boxing, as did his grandfather and several other members of his father’s side of the family.

Vitone was a 14-year-old freshman at Montville High School when he first crossed paths with boxing. He had always played football, but was smaller than other kids and struggled to get playing time. That’s when his sister’s friend told him about Aces Boxing Club, then located in Montville. 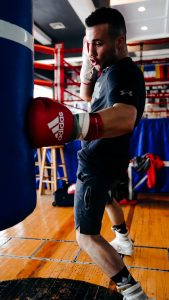 At the time, Vitone describes himself as a chubby, shy kid who couldn’t do a single pull-up. More than providing him with a pastime, boxing has also helped Vitone overcome his own battles outside the ring. He was diagnosed with Generalized Anxiety Disorder as a child, and finds that the boxing ring provides him a level of comfort that he struggles to maintain outside of it.

“Being a human is not easy, but that boxing gym is always like therapy to me. It was always a great outlet and just being anxious makes me work that much harder. Thinking about the fight makes me work ten times harder,” said Vitone.

“I’ve gotten better with it over the years and I feel like boxing is a huge reason why.”

Joe Zabry, who has trained Vitone since day one, doesn’t view his anxiety as a negative. He feels that the key to boxing is harnessing the naturally occurring nervousness. He says that people often mistake him for being “punchy” because of the way he sometimes stutters his words, but says that’s how he has spoken since he first started boxing.

“Boxing has always kept Nicky balanced. It’s outside the ring where he gets anxious. Inside that ring, he’s very sure of himself,” said Zabry.

Zabry knows all about the complicated emotions that go into combat. He competed as an amateur boxer as a child, and then transitioned into what would later be known as amateur mixed martial arts. At 18, he enlisted in the U.S. Air Force, serving six years in active duty and another six years with the Air National Guard before retiring with the rank of Staff Sergeant.

He opened up Aces Boxing Club in several different locations, including Fairfield, N.J., where it was washed out by Hurricane Irene. They reopened in Boonton, N.J. in 2012, in a second story location that is unlikely to be impacted by flooding, and have been there ever since. 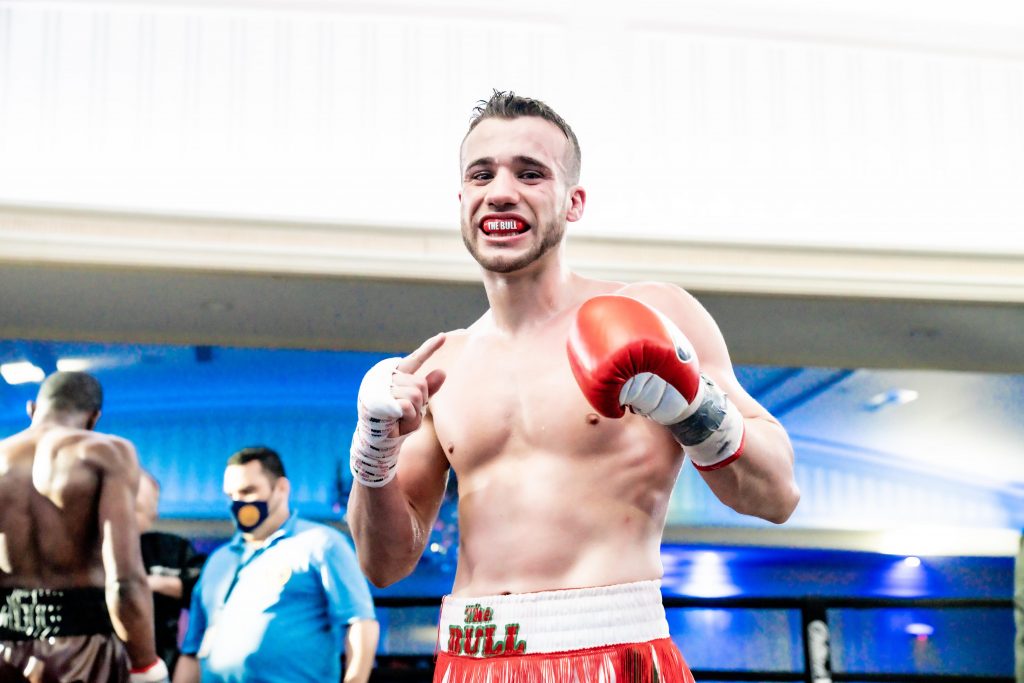 Under Zabry, Vitone had approximately 40 amateur fights, highlighted by his 2019 victory at the Sugar Bert Boxing National Championship in Kissimmee, Fla. The win came at a pivotal point in his life, as he pondered which direction he would go in. He wondered if he could continue pursuing his passion of boxing, or if he’d fall into a more traditional life, like he had dabbled with while studying criminal justice at William Paterson University, or while working as a construction laborer.

“I was really unsure of my future in the sport. It’s hard when you’re not making a lot of money,” Vitone admitted.

“I went out to that tournament, it was really all or nothing. I basically told myself if I don’t win this tournament, I don’t know how I’ll keep going forward with this sport.”

Vitone did win, but he still had some unfinished business with the New Jersey Golden Gloves. Vitone came close once, losing a razor thin 3-2 decision in the 141-pound open class final in 2016 to Aadam Ali, a slick southpaw who would end up winning the National Golden Gloves the final year.

Vitone was preparing to compete in the 2020 Golden Gloves when the tournament was canceled mid-way due to the COVID-19 pandemic. With that plan on hold, Zabry presented Vitone with the opportunity to turn professional in August of 2020. Vitone took it, and won his first four fights by early stoppages.

He experienced his first hint of adversity in his fifth fight, drawing with a tougher-than-his-record journeyman Matt Gaver in April of 2021. Then, in his sixth bout, he suffered his first defeat, losing a split decision to Jordan Rosario in his New Jersey homecoming bout on a Premier Boxing Champions card at the Prudential Center in Newark. Two more rounds and Vitone feels the outcome would have been different, but he didn’t have two extra rounds to work with.

“Coming off a draw and loss is one of the hardest things I’ve had to face in life. Second guessing everything, especially so early in my career,” said Vitone.

“I took that loss from Jordan and I grew 100 percent from it. It was a low part in my life but I overcame it and I feel that’s what sets me aside from a lot of the fighters coming back from a draw and a loss.”

Even in adversity, Zabry says he has seen Vitone adjust in ways that hint at him having greater potential. He recalls times when Vitone had been knocked down in amateur fights, risen up and won.

“Nick’s one of those guys that, when he needs to get something done, he’ll get it done,” said Zabry.

“Even if you’re a better boxer than him, he’s gonna cut you off, he’s gonna pressure you. He’s gonna outwork you.”

Vitone added assistant trainer Aroz “Terrific” Gist to his camp after the Gaver fight to work on improving his head movement, and has now won three straight, including a six-round shutout decision over Llewelyn McClamy last month in Paramus, N.J. on a night that felt closer to the homecoming he would have wanted.

Vitone is planning to stay busy, with another fight scheduled for July. He plans to fight in at least six six-round bouts, before progressing to eight rounds and so on, where he feels he’ll be able to show more of his potential. He hopes to sign on with one of the big promoters, but isn’t complaining about riding down I-95 in a school bus if it means getting to do what he loves for a living.

“I feel like I’m the type of fighter who gets better in the later rounds. I have great conditioning and great body work so I feel like going more rounds will show more of my skills,” said Vitone.