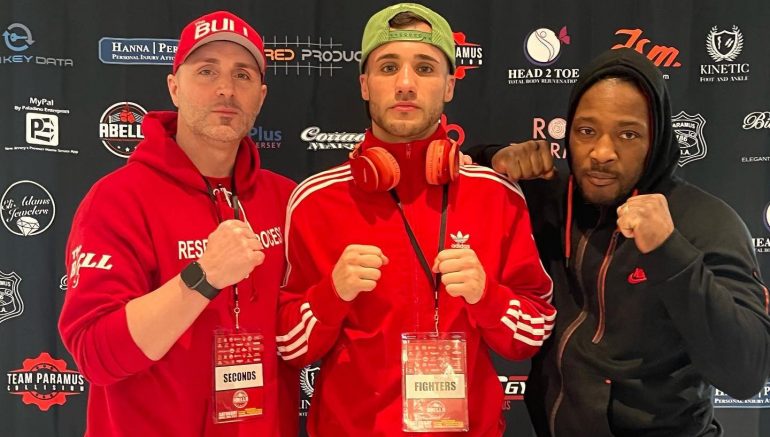 The home state fighters went 7-0 on Saturday night on a rare boxing event in the suburbs of New Jersey’s Bergen County.

Nicky “The Bull” Vitone (7-1-1, 6 knockouts) showed he could move as well as gore his opponents, winning a unanimous decision over Llewelyn McClamy in a six-round junior welterweight bout at The Terrace at Biagio in Paramus, N.J.

Vitone, who is trained by Joe Zabry out of Aces Boxing Club in Boonton, N.J., stunned McClamy (3-2-1, 1 KO) with a left hook in round two. Rather than lay down, McClamy showed he had some ability of his own, splitting the guard with uppercuts inside and landing long right hands on his shorter opponent in round three.

The bout turned into a high-paced brawl in round 5, with both men exchanging combinations to the head and body. Vitone showed he wanted it more in the sixth round, forcing McClamy to the ropes with his consistent jab and banging him to the body.

Zabry said it was Vitone’s “conditioning, body punching and ability to dig deeper” that made the difference in the fight. He adds that they are looking to fight again in June or July.

The win was the third straight for Vitone, and his first as a pro in his home state, after losing a split decision to Jordan Rosario in July of 2021 in Newark.

Terry, a 2017 National Golden Gloves finalist, hadn’t fought since 2019, but says he wants to stay active.

“Fighting guys like this is gonna make me better. I feel like these types of fighters bring the best out of me,” said Terry, who is managed by Bobby Rooney. Rooney says he expects Terry to be back in action on May 14 in Newark, N.J.

“For me to come back and fight a guy like that…I know I could excel in this division.”

David Roman Curiel worked off nine years of ring rust, winning a unanimous decision over the slap-and-survive style of Henry Mendez. The scores were 40-36 on two cards, while the third had it 39-37, all for Curiel.

Roman (4-1-1, 1 knockout), the brother of former pro Freddy Curiel, was fighting for the first time since his 2013 decision loss to Patruk Szymanski. The Paterson, N.J. resident got the better of the action when they exchanged, throwing shorter, harder punches than Mendez (0-6-2), who was denied his first ever victory.

Chaz Nguyen had a successful professional debut in a light heavyweight bout, knocking out Tyler Voigt (0-2) at 2:54 of the first round of a scheduled four-rounder.

Nguyen, a 2016 N.J. Golden Gloves sub-novice 178-pound champ and an East Brunswick, N.J. police officer, attacked Voigt from the opening bell, firing away with heavy right hands and forcing Voigt on to the defensive. Nguyen finally broke through near the end of the round, knocking Voigt to the floor just as the referee waved the bout off.

Nguyen trains with Al Artola and Joe Rossi at the YESS Boxing Club in Dumont, N.J.

Keon Ivery (1-1), a middleweight who also trains at YESS, earned his first victory with a four-round shutout of Tyler Jacques (0-2-1). Ivery of Lodi, N.J. won the fight by the scores of 40-36 on all three cards. The fight was Ivery’s first since 2017, when he lost a decision to James Martin, who is best known for his 2021 upset win over Vito Mielnicki Jr.

The card opened up with Jamir Cope scoring his second knockout win in as many fights, stopping Ryan Schwartzberg (1-5-1, 1 KO) in round three. Cope, 25, of Teaneck, N.J. is a three-time N.J. Diamond Gloves champion and one-time novice Golden Gloves champion.