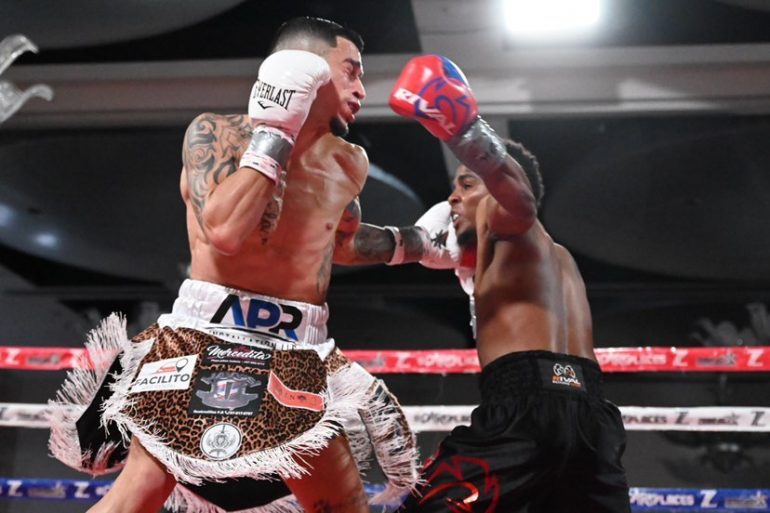 Emmanuel Rodriguez (left) connects with a hook to the face of Juan Gabriel Medina. Photo by David Algranati/The Fight Photos
14
May
by Ryan Songalia

NEWARK, N.J. — Emmanuel Rodriguez earned his “Salserito” nickname for his dance moves, but the unbeaten bantamweight showed he had hand skills to match his footwork in a sixth round technical knockout victory over Juan Gabriel Medina on Saturday night at the Robert Treat Hotel.

The flashy Rodriguez (11-0, 6 knockouts) used his speed and power punching to break down the overmatched Dominican fighter Medina (14-10, 12 KOs), forcing him to quit on his stool following the sixth round.

“Instead of ‘No-Mas-chenko,’ they should call me No-Mas-Manny,'” joked Rodriguez, playing off the nickname previously given to Vasiliy Lomachenko.

“I heard him breathing really hard. I started going a little bit more to the body because I knew I was going to mentally break him down and that’s exactly what happened, I broke him down.”

The performance was the most complete so far as a professional for Rodriguez, who displayed his blinding speed by twisting different directions to snap out pot shots ala Prince Naseem Hamed. Rodriguez cracked Medina with as hard and clean a right hand as he could at the end of the fifth, but Medina showed he could take power punches when they came one at a time.

The fight was Rodriguez’s first since since last November, when he stopped Delvin McKinley in five rounds in the same building. Rodriguez was expected to return to the ring in March, but a torn tendon in his right hand sidelined him for that date. Rodriguez still estimates that his right hand is less than 70 percent of its typical strength.

Rodriguez could return to the ring as soon as July, though his team says they are still exploring options for his next outing. He says his focus is now on collecting more minor belts to improve his ranking among the sanctioning bodies.

“God willing my next fight will be ten rounds, but I’m not rushing,” said Rodriguez, who was born in Newark but grew up in Quebradillas, Puerto Rico. “I could do one more eight round fight.”

The event was promoted by Rising Star Promotions, and featured many of the top prospects who had been developed in the New Jersey amateur boxing system.

If “Salserito” Rodriguez was the main event, the only fighter whose reactions could rival him was another Newark favorite, Anthony Johns.

Johns, known as “Big Back,” thrilled his hometown fans with a violent third round knockout of Gilberto Duran (4-6, 4 KOs). The 29-year-old Johns (3-0, 3 KOs) dropped the much taller Duran with a right hand in the first round, and put him out cold with a left hook late in the third. Duran of Yakima, Wash. was on the floor for several minutes afterwards.

Anthony Johns (3-0, 3KOs) scored a frightening third round KO of Gilberto Duran in his first pro outing in his hometown of Newark, NJ. Johns was a 2019 National Golden Gloves champ at 108 pounds, but fought as a bantamweight tonight because of a lack of smaller opponents pic.twitter.com/rHtJPOyQ64

Johns, a 2019 National Golden Gloves champion at 108 pounds, weighed 109 pounds in his last bout in December, but fought as a bantamweight tonight, partially due to the scarcity of smaller weight fighters in the northeast region.

A thrilling strawweight battle between Andy Dominguez (8-0, 5 KOs) and Edwin Reyes (8-8-3, 5 KOs) was unfortunately marred by a questionable stoppage. Fans in attendance booed after the co-main event bout was waived off by the referee at 1:23 of round 4 following a knockdown of Reyes which looked like more of a slip than the result of clean punching.

Dominguez, a Mexico City native who now lives and trains out of Las Vegas under famed coach Ismael Salas, demonstrated great combination punching and body work though his opponent from Guatemala proved to be more than game.

The circumstances didn’t mar the celebration, as Dominguez greeted fans in the hotel lobby while a mariachi band serenaded the crowd.

Kahshad Elliott, a prized junior middleweight prospect from Plainfield, N.J. took out his frustrations on Tray Martin, stopping the overmatched opponent at 2:53 of the first round.

Elliott (2-0, 2 KOs) sent Martin into the ropes with a left hook, before finishing him off with a right hand and a left hook. Elliott, a 10-time national champion as an amateur, hadn’t fought since October of 2020 due to a severe hand injury. Elliott, 21, is trained by his father, Ahman Elliott, and is signed with Split-T Management.

Junior middleweight prospect Kahshad Elliot returns with a vengeance, scoring a brutal first round stoppage of Tray Martin (3-6) at the Robert Treat Hotel in Newark. Elliot (2-0, 2KOs) of Plainfield, NJ hasn’t fought since October 2020 due to a hand injury pic.twitter.com/FputLpMQgb

Ceballo of New York, N.Y. was a highly decorated amateur, highlighted by winning the 2017 U.S. National Championships. Ceballo is trained by Colin Morgan, and was fighting his first fight since December of 2020.

David Roman Curiel continued to make up for lost time, winning his second fight in a month following nine months of inactivity.

Curiel says he expects to be back in the ring again in late July or early August.

The upset of the night came in a featherweight bout as popular featherweight John Leonardo (7-1-1, 4 KOs) of Manalapan, N.J. dropped a six-round majority decision to Jostin Ortiz Maysonet (4-0, 3 KOs) of Bayamon, Puerto Rico.

Leonardo, a 2016 N.J. Golden Gloves champion, was stunned in round three by a right hand, but showed courage in closing the fight strongly.

Junior middleweight prospect Robert Terry looked determined to score that elusive first knockout win, but Evincii Dixon had other plans. Terry (6-0) of Jersey City earned the shutout victory, winning by the scores of 60-54 across the board, but never seriously hurt Dixon (10-30-2, 5 KOs).

Terry didn’t punch as hard as they did, but he flashed quick combinations to the head and body which kept Dixon on the defensive and limited the taller opponent from Lancaster, Pa. to one punch at a time.

Terry, 28, was a 2017 National Golden Gloves finalist, and is coming off a training camp as a sparring partner for Jaron “Boots” Ennis.

Jose Nieves (3-0, 1 KO) had the shortest night of anyone, knocking out David Ashley (0-2) with a single left hand at 26 seconds of round one. Nieves, 21, of Woodbridge, N.J. soaked in the adulation from the many Puerto Rican fans in attendance.