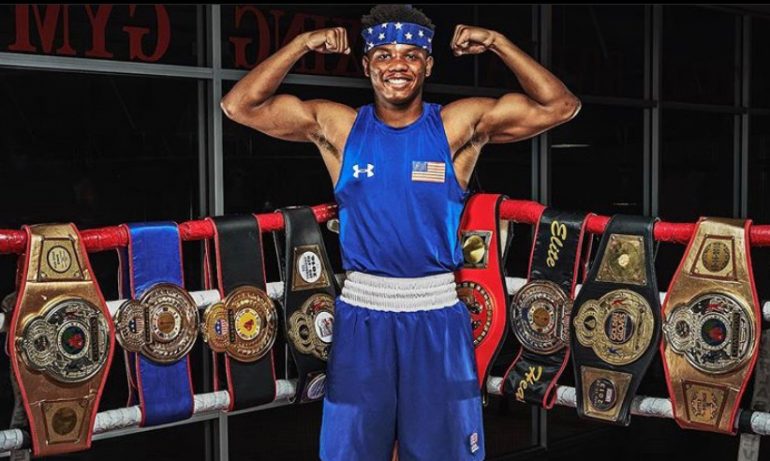 Though the boxing gyms are closed, Kahshad Elliott hasn’t taken a step back from his own training. That’s the advantage of having your father as trainer and living at home.

The Plainfield, N.J. resident had been gearing up for his pro debut when boxing, and the rest of the sports world, was put on hold by the coronavirus pandemic.

The pause meant a scheduled trip to meet with TMT, the promoter he says had shown the most interest in signing him, had to be delayed, but Elliott isn’t worried he’ll be sidelined for long.

“Everything’s just been pushed back but I’m still looking forward to making my debut as soon as this is possibly over, maybe towards the end of this year,” said the 19-year-old Elliott.

Elliott had made the decision to turn pro after falling short in the 2020 U.S. Olympic trials in December, which he says was a matter of not “getting the calls I was looking for.” He had won ten national titles in the junior olympics, including three straight National Junior Golden Glove titles from 2013-2015, and had been rated in the top 5 by USA Boxing despite competing in just three tournaments as an elite.

The Olympics were never his dream; it was always about winning titles as a pro.

“I’ve competed at every level as an amateur, from a kid to elite, so there was really nothing left for me to do as an amateur. I sparred with pros, from Danny Jacobs to Peter Quillin to Sergey Derevyanchenko, Shakur Stevenson…they all said I had a pro style so it just made sense for me to turn pro,” said Elliott, whose younger sister, 16-year-old Kaheil, is also a multiple-time national champion.

Anger problems, brought on by “hard times,” convinced his father, Ahman Elliott, to introduce him to the sport at age six.

Plainfield, which is less than an hour’s drive from New York City, has a boxing culture of its own. One of its past contenders, former world title challenger and Lennox Lewis assistant Harold Knight, was among those Elliott learned from when he was younger, and his brother, Albert Knight, also trained him. Another contender from the city, Tracy Spann, would come to the gym and spar some of the other fighters when Elliot was in elementary school.

“I started watching older guys and older trainers. I learned the old school way that was before things changed,” said Elliott, who now trains at Weapons 9 in Middlesex, N.J. when non-essential businesses aren’t being ordered closed.

Shakur Stevenson was among the fighters closer to his age that Elliott spent time around in the gyms, having trained alongside Stevenson and his grandfather/trainer Wali Moses at Elite Heat Boxing in Newark. The two traveled to national tournaments together, and Elliott says Moses gave him words that boosted his confidence. “His grandad always told me, ‘You’re right after Shakur.’ That always stuck with me because Shakur is just amazing, that’s just a talent you don’t usually see. For his grand dad to tell me I was next, after him, that made a lot of sense and made me feel good and make me want to keep going with the boxing,” said Elliott.

After leaving the amateurs, Elliott signed with manager Tim VanNewhouse of Split-T Management, who says he had been following his career since he was 16. In his scouting report, Van NewHouse describes Elliott as a “well rounded boxer-puncher who can fight from the orthodox and southpaw stance,” and took note of his jab and combination punching.

“He has good fundamentals and all the tools to make a smooth transition into the professional ranks,” added Van NewHouse.

Even while fighting, Elliott plans to begin post-secondary studies at Union County College in Cranford, N.J., studying business and management. The plan is to eventually have his own boxing promotional company and get into management once his own fighting career is done.

Plainfield is a small town without much of a claim to fame. Elliott hopes to change that.

“Everything that we had or what people accomplished was from years ago…but I’m looking to change that,” said Elliott. “I’m looking to be the next big thing out of Plainfield.”