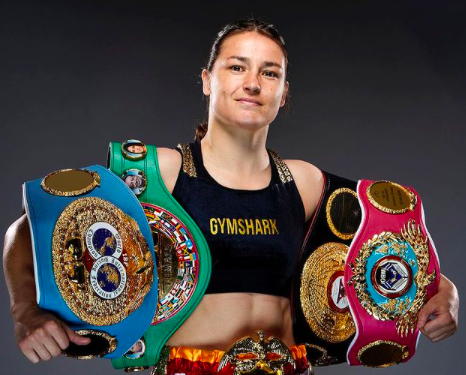 04
May
by Diego Morilla

With all her titles on the line, the Queen knew exactly when to deploy the heavy artillery.

Ireland’s Katie Taylor, undisputed lightweight champion of the world and No. 1 pound-for-pound female boxer on the planet, was boxing beautifully and aggressively as usual against her old Olympic nemesis Natasha Jonas this past May 1st, but her all-out style allowed Jonas to seize a few openings and land a few bombs that threatened to derail Taylor’s unbeaten run for a minute.

And then, fighting with a sense of urgency, Taylor surged down the stretch to cement a solid yet hard-fought win that helped her hold on to a victory that, for a minute, seemed to be slipping away from her hands. 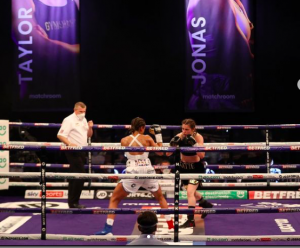 Jonas found home with some power shots and worried Taylor fans a few times in their match.

Her performance was good enough for her to hold on to her belts (including The Ring’s) and her P4P crown, but her willingness to put it all on the line by going after Jonas since the opening bell was the determining factor in the assessment of The Ring women’s ratings panel to ratify her position atop the mythical pound-for-pound rankings.

The cracks in her armor, however, are beginning to show, at least according several of the panel’s opinions.

“Jonas knew how to expose Taylor’s defensive flaws,” argued Argentina’s Yesica Palmetta, who saw “a great deal of anxiety on the part of Taylor wanting to achieve a knockout that she did not finally achieve.” 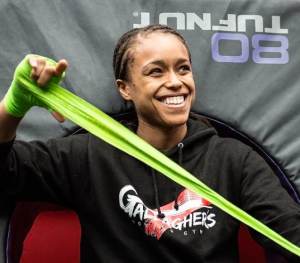 Jonas’ stock rose in the loss…but yes, folks are starting to talk about a falloff in Taylors’ game.

“Taylor was able to impose her speed and precision at the beginning of the fight, but Jonas was adapting to put her in a tight spot and show that she has a respectable punch. Taylor got the victory at the end, but it was a lackluster win.”

Other panelists went even further on their assessment of Taylor’s decaying abilities, in spite of how good Jonas’ performance was.

“Katie Taylor did not have the performance that I expected to see,” said Mexico’s Irene Deserti, editor of Rincon Rojo magazine, while Mark Jones indicated that, “Taylor’s recent down the other-side-of-the-hill is only slightly noticeable, but it’s happening. Taylor is still the best lightweight in the world by a comfortable margin, but she’s getting hit more often and hangs around in the pocket too long after exchanges.”

Even though moving a fighter up the rankings after a loss is an extreme decision that happens only in extraordinary circumstances, the panel agreed to allow Jonas (who was coming off a disputed draw against Terri Harper at 130 and was yet to be ranked in any of The Ring’s divisional Top 5) to enter the lightweight ranking at No. 5, dropping Nicole Wessner (inactive for almost two years) out in the process.

Jones went as far as proposing to enter Jonas at No. 3, a sentiment that found more than a few votes. In fact, only one ballot was the deciding factor in the decision to place Jonas at No. 5 after a spirited debate.

“I felt she won the Harper fight during the summer (…) and she put on a great effort against Katie Taylor. I’d frankly put Jonas at No. 3 in this crowd – she’s earned the placement, with the note that had she been in the pocket from the beginning it would have been a different fight outcome,” argued boxing historian Malissa Smith, while adding that “the Taylor-Jonas fight really made the case for three minute rounds in women’s professional boxing. Given that men and women fight the same five minute rounds in MMA, there is really no reason to continue forcing two-minute rounds. And if safety from head injuries is really the concern, then drop the men to two minute rounds.”

In the bantamweight division, No. 2 Debora Dionicius dropped a decision in six rounds against Gloria Yancaqueo, who is now 8-11, in her native Argentina during the weekend. As a result of that, Dionicius was dropped entirely from the bantamweight rankings and Britain’s WBA titlist Shannon Courtenay was brought in at No. 5 by a unanimous vote by the panel. Everyone else in the 118-pound list moves up accordingly.

“She put up a great fight against (Australia’s Ebanie) Bridges and I think she’s been making steady progress,” said Deserti about Courtenay, with Japanese writer Yuriko Miyata agreeing and justifying her vote with the fact that Courtenay displayed “good work both inside and outside in very entertaining fashion” in that fight, which took place in England on April 10.