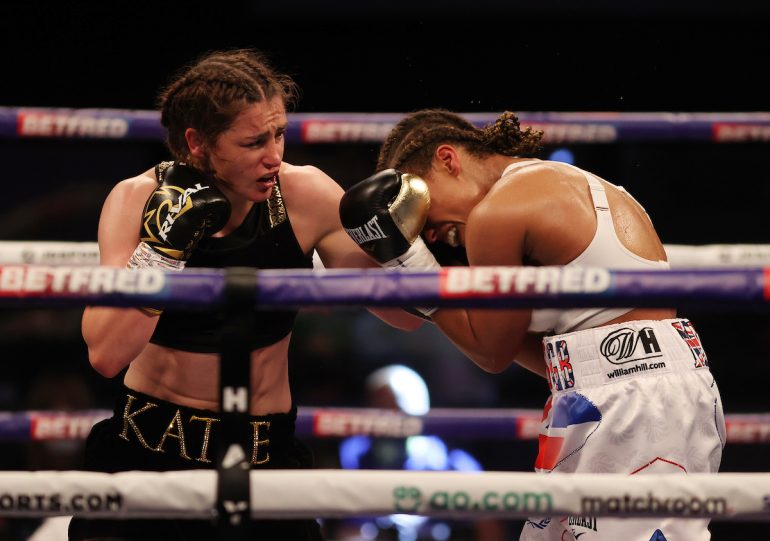 Undisputed women’s lightweight champion Katie Taylor defended her championship titles in a bombstorm 10-round unanimous decision win over a game, competitive Natasha Jonas at the Manchester Arena in Manchester, England, on Saturday. The official scores were 96-94, and two scores of 96-95.

The bout served as the chief support to the 12-round heavyweight main event featuring Derek Chisora and former titlist Joseph Parker.

Taylor, who holds The Ring Magazine championship at 135 pounds, had more skill than the Liverpool-based title challenger, but was tested to her wits.

“I’m just delighted with the win first of all,” said Taylor (18-0, 6 knockouts). “What a fight. I think every time myself and Tasha fight, it has been an urgency type of fight.

“This fight was no different. I had a bit of a slow start. I felt a little bit flat earlier, but I thought deep down that I won the championship rounds. Tasha came out with a great one.”

The bout got off to a swift start, with Jonas forcing the Irish star to work from the opening bell. However, Taylor’s class was exemplified in the fourth frame when the 34-year-old connected with a counter left hook that left Jonas shaking her head in frustration.

But the 36-year-old Jonas rallied in the middle rounds. In the sixth, she hurt Taylor with a counter right hand. She then followed up with a strong performance in Round 8, connecting with a solid uppercut that stopped Taylor in her tracks.

But the champion went back to the basics in Round 9 and used her ring craft and experience to bank the final sessions.

“I knew it was close,” she stated. “I have shown every time that I’m going to step up.

“People were arguing that we should [have been] at the top of the bill, and we’re going to be a tough act to follow.”