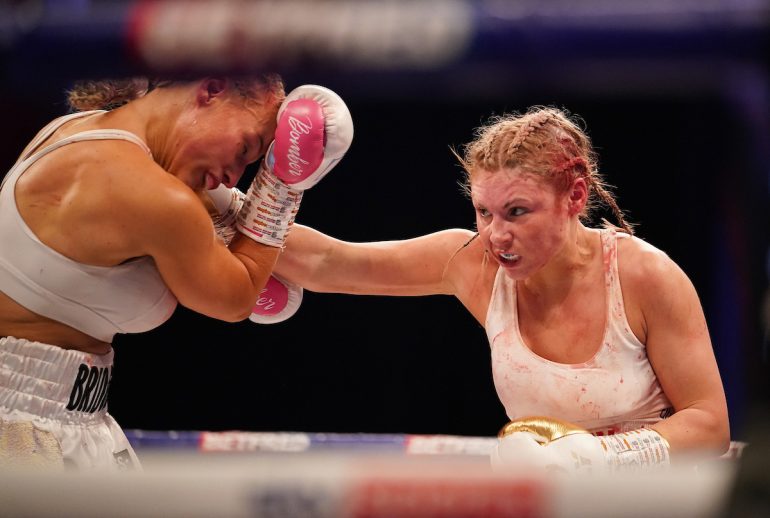 Courtenay (right) was a step ahead of Bridges. Photo by Dave Thompson/ Matchroom Boxing
10
Apr
by Tris Dixon

Shannon Courtenay captured the WBA bantamweight title in her eighth fight following a 10-round war against Australian Ebanie Bridges.

“I can’t put it into words,” said a euphoric and emotional Courtenay. “I had the cuter shots, I kept popping the jab out. I got reckless when I traded with her but sticking to the boxing was the game plan and when I stuck to boxing I won the fight.”

She wants to set the record straight against Rachel Ball, the only woman to have beaten her, next.

Both Bridges and Courtenay tried to assert themselves early on but Courtenay scored with the bigger shots to take the first round.

Bridges got her right hand going in the second and the Watford woman bled from a cut on the side of her head as the Australian came on.

Courtenay (7-1, 3 knockouts) looked to work the body in the third and the fourth round saw the fight become increasingly physical. In Round 5, Courtenay landed a crunching right hand that went straight to Bridges’ legs and had her in trouble for the remainder of the session. Neither would have been accused of being Willie Pep through the sixth in a hard battle and they punched one another to almost a standstill in the seventh. Bridges had a mouse around her left eye and she bled from the mouth but she possibly took that round.

Courtenay was busier in the eighth and Bridges’ left eye was just about slammed shut. Shannon went right hand happy in the ninth, knowing the Australian couldn’t see that shot coming.

Whether or not Ebanie (5-1, 2 KOs) should have been allowed out one-eyed for the last round can be debated but she showed tremendous heart to stay in the fight and keep marching forward all the way to the final bell before losing by margins of 97-94 and 98-92 (twice).

Kash Farooq won an exciting 10-rounder over Nicaraguan Alexander Espinoza. Farooq was cut by the right eye but victorious in a good fight on all three cards, 97-95, 97-93 and 97-94. He improves to 15-1 (6 KOs) and promoter Eddie Hearn said he wants Farooq to rematch Lee McGregor, who won their first fight on a split decision in November 2019. Espinoza dips to 20-3-2 (8 KOs).