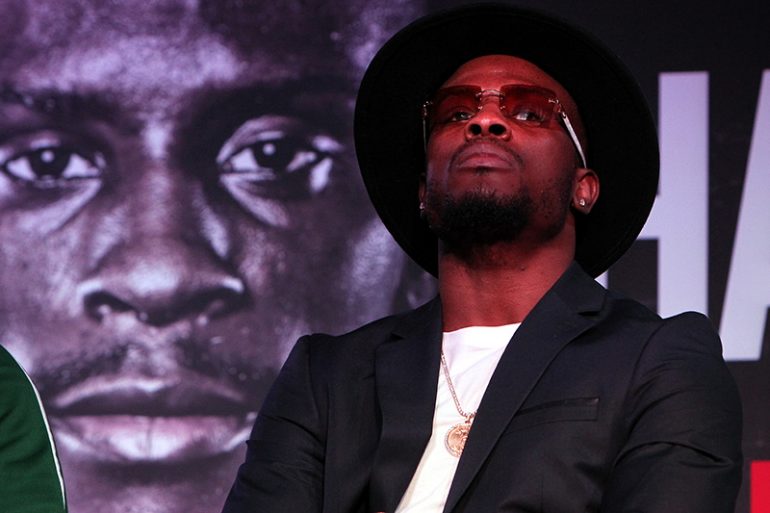 Like so many, Tony Harrison would like to forget 2020. It was a tough year – tough for millions – but Harrison is resilient and working toward a rebirth in 2021.

He entered 2020 on a down note and it got worse. On December 21, 2019, Harrison was knocked down by Jermell Charlo twice and stopped in the 11th round of a close fight, losing his WBC junior middleweight title in a rematch. Harrison had taken the 154-pound belt via disputed unanimous decision in their previous fight one year earlier.

The loss was tough to take.

“I’m a competitor, so it’s always going to be hard. Losing is always hard,” Harrison told The Ring. “The thing for me is to learn from the mistakes I made. I thought I was having a good outing for me being off for a year. I was having an amazing outing against a guy they considered the best in the division.”

Just three months later, the coronavirus pandemic took hold in the United States. Most of the country shut down, including the boxing industry, for several months.

COVID-19 has now claimed more than 563,000 American lives. One of them was Ali Salaam, Harrison’s father and trainer, and a former professional welterweight during the mid-1980s. He was only 59 when he passed away at a Detroit hospital on April 19.

“Fighting was the last thing on my mind after losing my father,” Harrison said. “It was a hard year losing somebody I been with my entire life. It was a struggle. It was a struggle but I coped. I sobbed; I cried and I got on my feet, man. And the dream continues. It continues for him.”

Harrison did not fight for one year almost to the day between his two title bouts against Charlo. Now he is coming back from another extended layoff. This time it’s a 16-month break, the longest of his 10-year career and doing so nearly one year to the day since his father died. He will look to get back in the groove when he takes on hard-hitting Bryant Perrella in the main event of a Premier Boxing Champions card on Saturday (FOX and FOX Deportes, 8 p.m. ET) without spectators at Shrine Auditorium and Expo Hall in Los Angeles. 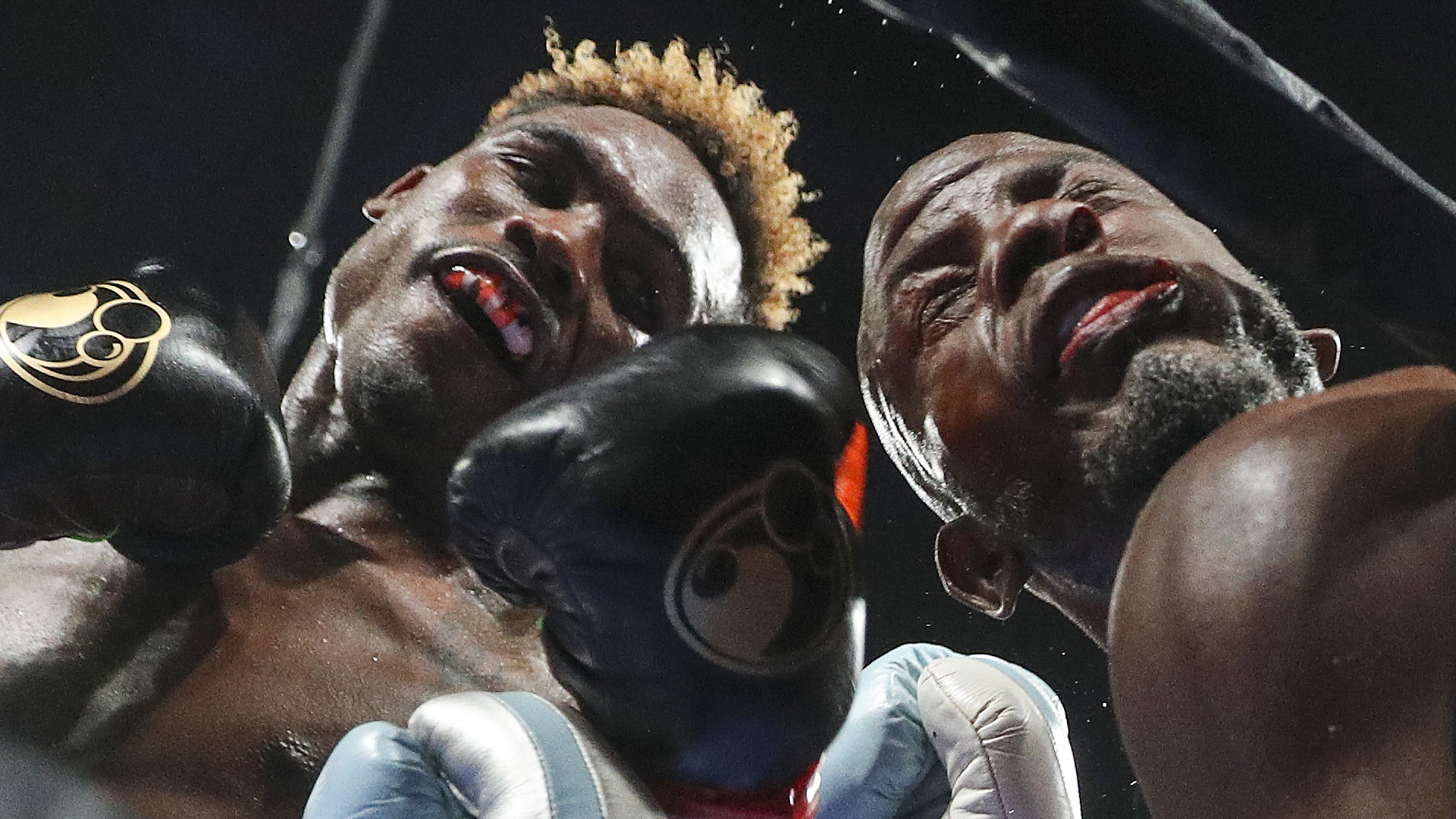 Jermell Charlo (left) avenged his 2018 loss to Tony Harrison with a knockout in December of 2019. (Photo by Stephanie Trapp)

While Harrison is excited to get back in the ring, he said it took him a few months to find the desire again after his father’s death. He said he went through difficult times, although he did not want to elaborate.

“I was just doing sh– I don’t normally do and it was getting out of whack and I just had to come to the conclusion myself, like, death comes to us all,” Harrison said. “It’s just a matter of when. I can’t sit and kill myself. The way I was doing it, I probably would have killed myself.”

Asked what he was doing that he normally wouldn’t do, Harrison snapped, “That’s none of your business. I was doing sh— I wasn’t supposed to be doing. I was just living the wrong way. I just had to shake myself out of it.”

The 30-year-old Harrison (28-3, 21 knockouts), of Detroit, eventually did. He then called on older brother LJ Harrison to take the reins as his trainer and began to get back into shape physically and mentally. He started to think again about boxing, in which he has been involved since he was a kid.

“I’m super f—— anxious, to be honest,” Harrison said about Saturday’s fight. “Being off 16 months, everything changes – the speed, how the gloves feel, when you get hit. I’m anxious to see all that. It’s a good thing I have my first outing with my brother without a crowd so we can do it just like we do it in the gym – silent. Just take our time and do it correctly.

“I’m more of a crowd-pleasing kind of guy, so my first fight in 16 months, I don’t need no boos and I try to turn it up and all that. I just want to take it smooth, take it slow with Perrella in my first fight back. Just take my time, man. There’s no rush for me.”

When it came time for Harrison to make a decision on who he wanted to train him, his brother was his first and only choice. LJ has been his strength and conditioning coach and also grew up around boxing.

“I told him, come on,” Harrison said. “He got a lot of knowledge from playing pro [basketball in Europe] and he started off being my strength and conditioning coach. He’s always my brother, always my first teacher when it came to life. He understands what it means to be an athlete. He’s been around boxing his whole life. My family is born in boxing. I brought him to do strength and conditioning and we grew together. He’s very knowledgeable about sports.”

Harrison watched as his brother got his feet wet as a pro trainer on February 17, when LJ cornered his first fight as the trainer for undefeated super middleweight prospect Vladimir Shishkin, who cruised to a unanimous 10-round decision against Sena Agbeko on Showtime’s “ShoBox: The New Generation.”

Perrella (17-3, 14 KOs), 32, a southpaw from Fort Myers, Florida, is coming off a controversial loss to Abel Ramos in February 2020. Perrella was up big on all three scorecards when Ramos dropped him in the final seconds of the fight. Perrella beat the count but referee Jack Reiss waved it off after the bell should have sounded but didn’t. Officially the fight was stopped with one second left.

Harrison said he views Perrella as a tough opponent for his return to action.

“Being off 16 months, I feel like this the perfect fight they could give me – other than [Perrella being] a southpaw,” Harrison said. “I would have preferred an orthodox [opponent]. Other than him being a southpaw, I think this caliber of a guy, who’s tough, who can punch, makes for an amazing fight for both us coming off layoffs. I think whoever hits who first cleanly is the guy that’s going out.”

Still, Harrison believes he will prevail and has his bigger fish in mind. He said he would like to next fight fellow former junior middleweight titlist Julian “J Rock” Williams (27-2-1, 16 KOs), 31, of Philadelphia, who has not fought since January 2020. Williams was stopped in the fifth round and lost his unified IBF and WBA titles in front of a hometown crowd to Jeison Rosario.

“We both made it to the top. His pinnacle was the same as mine,” Harrison said of fellow PBC fighter Williams. “I feel like the skill level, he has can match what I do and I just think, for me, fighting at 30 years old, I want to fight the guys who have something to lose like me. [I want to fight] the most competitive guy I can match myself up with and I thought he was one of the top.”

Of course, what Harrison wants most of all is a rubber match with Charlo (34-1, 18 KOs), 30, of Houston. Their intense dislike for each other carried the promotion for both fights and seemed genuine as can be. Charlo further unified the division by knocking out Rosario in their three-belt title fight last September.

“I want the biggest fights. [Adviser Al Haymon] knows I’m not ducking nobody. I’m one of the guys in the division who ain’t scared of nobody.”