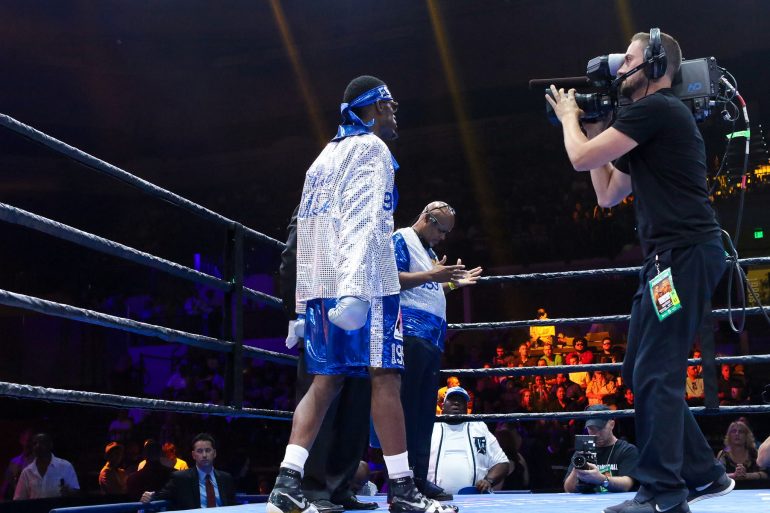 Tony Harrison paces as his father Ali Salaam prays in the corner. Photo from Harrison's Facebook
20
Apr
by Ryan O'Hara

Ali Salaam, the father and trainer of Tony Harrison, has died from COVID-19.

“You was in a tough fight and you went the distance. The decision just didn’t go our way, but we was together every step of the way,” Harrison wrote on Instagram. What more could I ask!!!! My right hand forever. Get some rest, pops. It ain’t goodbye. Just see you later!!”

Salaam was a mainstay in the Detroit boxing community for many years, training a plethora of pros and amateurs, including his son, who he guided to an upset victory over previously unbeaten Jermell Charlo to claim the WBC 154-pound title back in December 2018 at Barclays Center in Brooklyn, New York.

Charlo eventually got his revenge on December 21 when he knocked out Harrison in the 11th round of their rematch at Toyota Center in Ontario, California.

Salaam, the son of the late middleweight and light heavyweight contender Henry Hank, was a professional boxer before becoming a full-time trainer. He made his debut on October 23, 1984, winning a four-round split decision against Gary Terrell at Club Dimensions in Highland, Indiana. In an immediate rematch, Salaam also defeated Terrell on points. After spending much of his career fighting at 147 pounds, Salaam hung up his gloves in 1989 after dropping a unanimous decision to future two-time title contender Larry Barnes.

He finished his career with a record of 11-7 with five knockouts.