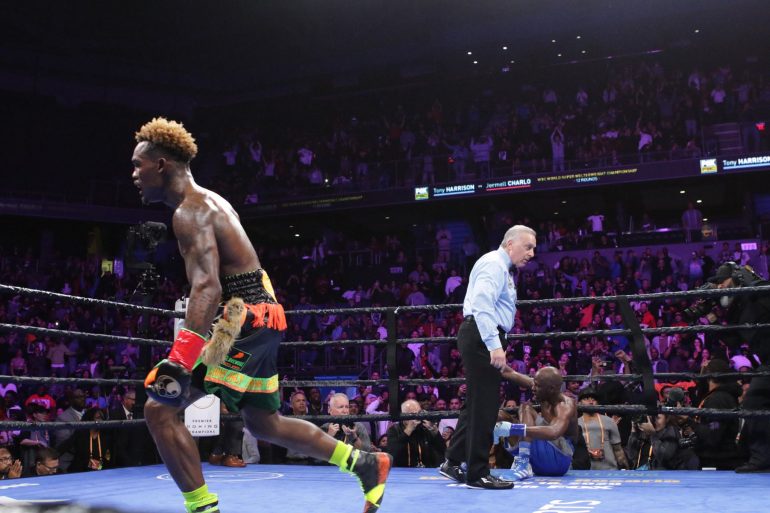 In one of the better fights of 2019, Charlo ended matters dramatically Saturday night, dropping Harrison twice in round 11 before the fight was stopped in an action-packed bout.

With the victory, Charlo improves to 33-1 (17 knockouts) and reclaims the WBC junior middleweight title.

The fight, which took place before a boisterous crowd at the Toyota Arena in this Los Angeles suburb, matched two fighters ranked in the top-10 by The Ring. Harrison entered Saturday night ranked No. 6, with Charlo ranked one spot below.

It was also a rematch of their Dec. 22 fight that took place at the Barclays Center in Brooklyn, which Harrison by unanimous decision in a fight where many thought Charlo did enough to win. The 28-year-old was scheduled to fight Charlo on June 23 in Las Vegas, but the bout was postponed about three weeks before due to Harrison suffering a sprain to his right ankle during training.

There was a lot of buildup for the fight, mostly by Charlo and Harrison throwing barbs and insults at one another, whether on social media or at press conferences, generating significant buzz from fight fans.

Charlo, who is the twin brother of WBC middleweight titleholder Jermall Charlo, was the aggressor from the opening bell. The tactic worked as Charlo momentarily stunned Harrison midway through round two with a right hand. Moments later, Charlo dropped Harrison with a left hook to the head. Harrison was not visibly hurt after getting up from the knockdown.

During the middle rounds, the smaller Harrison was able to land the more-effective punches, digging left hooks to the body of Charlo. Harrison was also able to connect with lead or counter right hands to the head of Charlo.

Sensing he was ahead on the scorecards, Harrison played to the crowd who, at times, chanted his first name, shimming and dancing in round eight.

By the 10th round, Harrison’s punch output was diminishing, and while he continued to stay in the pocket with Harrison, his punches had little effect on Harrison.

Charlo built off the momentum from that round to drop Harrison with a left hook early in round 11. Harrison beat the count and tried to fight back, but was dropped a second time from a barrage of punches against the ropes. Charlo thought the fight was over, running to the Harrison’s corner and climbing on the ropes while a few members of the California Commission were about to enter the ring.

After realizing the fight was not over, Charlo went in for the kill, battering Harrison around the ring until referee Jack Reiss stepped in and stopped the bout at 2:28.

At the time of the stoppage, two judges had Charlo up 96-93, while the third judge, including The Ring, had Harrison winning 95-94.

“I got the belt back and I didn’t leave it up to the judges,” Charlo said after the fight. “Tony is a former champion. He had a lot on the line. I dominated and I knocked him out.”

There is a possibility Charlo could attempt to unify the belts against IBF and WBA titleholder Julian Williams, who faces Jeison Rosario on Jan. 18 in Philadelphia. A fight against former world title challenger Erickson Lubin is also a possibility.

“2020 is going to be real. It’s going to get loud. Listen, I’m a gentleman at the end of the day. I showed my respect, but at the end of the day, I don’t like the dude. He can get it again, but I’m off to bigger and better things. I’m down for making history. He held the title too long and I had to come back and get it.”

In the co-feature, Heavyweight prospect Efe Ajagba overcame a knockdown, the first in his pro career, to come back and knock out Iago Kiladze in round five to improve to 12-0, 10 knockouts.

The 25-year-old Ajagba, who is originally from Nigeria and now resides in Houston, had annihilated his opposition thus far, save for his last bout on July 20 in Las Vegas, a 10-round unanimous decision over Ali Eren Demirezen. Kiladze entered the fight winless in his previous four bouts.

Towards the end of round two, a hard right from Ajagba dropped Kiladze to the canvas. Kiladze beat the count and chose to fight back, despite not having his legs underneath him.

In an epic third round, Ajagba stunned Kiladze with an overhand right to the head. Ajagba walked away as Kiladze looked like he would fall to the canvas, but he remained on his feet until Ajagba dropped him to the canvas moments later. Kiladze beat the count, and dropped Ajagba to the canvas with a counter right hand to the head, bringing the crowd to its feet. Both exchanged hooks and crosses until the bell sounded to end the round.

Ajagba’s power was just too much though as Kiladze looked weak with every punch Ajagba connected. The end finally came in round five as an overhand right dropped Kiladze to the canvas. While he was able to beat the count, Kiladze was getting drilled, prompting his corner to throw in the towel, prompting referee Thomas Taylor to stop the bout at 2:09.

Kiladze, who is originally from Georgia and now resides in Los Angeles, drops to 26-5-1 (18 KOs).