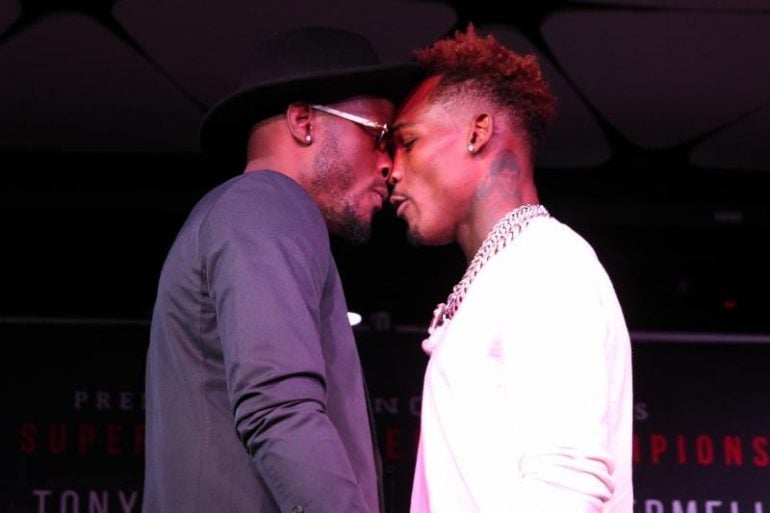 Tony Harrison and Jermell Charlo butt heads during their staredown at the kick-off presser for their June 23 rematch. Photo by Chris Farina / Mayweather Promotions
09
May
by Michael Baca II

LOS ANGELES – The aftermath of controversy can spark many different arguments, ideals and aspects of the fight game, and at Wednesday’s press conference announcing the rematch between Tony Harrison and Jermell Charlo, it was clear that a mutual contempt was birthed in wake of their fight five months ago.

On Sunday, June 23, Harrison and Charlo will headline a Premier Boxing Champions card on FOX (8:00 PM ET / 5 PT) from the Mandalay Bay Events Center in Las Vegas, Nevada, but there was a looming sense that a fight could pop off at any moment on stage at the Conga Room. To initiate the presser, they stood face-to-face and eventually nose-to-nose to begin the back-and-forth bickering that would last through the entire procedure.

“I’m gonna jump right into it,” said Charlo, who took the podium first as the challenger. “We obviously know what happened in the fight. I’m not the type of person to dwell on the past. I’m gonna take that L and let it build me. He got two losses already, so he knows what it feels like. Now I’m a person that does. I’m gonna come into this new fight with a different mindset and a much better game plan.

“What I do well is destroy those that think that they can run their mouth — like what Tony’s doing.”

Charlo (31-1, 15 KOs) was emotional during the immediate aftermath of receiving his first defeat, which also resulted in the loss of his WBC junior middleweight title. The Houston, Texas native out-threw and out-landed Harrison over the course of 12 rounds, but it wasn’t enough to fully convince the judges ringside in Brooklyn, New York. Charlo was rather tranquil in comparison on this day, aside from the constant war of words that often disregarded the formalities of a press conference.

“I don’t even know where to start,” Harrison said. “This guy right here is a clown. The only people that believe in this clown is the people that’s around him, and the people that have never been through it. I don’t know who he think he is, but that shit don’t scare me.”

Harrison (28-2, 21 KOs) benefitted from the doubt of several close rounds in what can be described best as a competitive matchup. Although he was topped statistically, Harrison landed the cleaner punches as the counterpuncher in many of the rounds, making it an argument of taste ringside. A protege of the late great Emmanuel Steward, Harrison’s elation couldn’t have been more exaggerated, but he had already gone through the trials and tribulations of a defeated fighter, one who got knocked out in his first world title attempt (TKO 9 Jarrett Hurd)

“Enjoy the belt while you got it,” suggested Charlo. “You the champ, right? You supposed to get this confidence and run around like you’ve got due and all the extra things. Now, I’m a man outside of boxing. I don’t know how all you take disrespect but I don’t take disrespect well. But you not me. And you’re not in my shoes so keep your mouth shut.

“Like I said, I wish a blessing to you and your father. I’m glad that ya’ll got the opportunity again to do what you do, but you know personally to yourself that you didn’t do enough to win that fight. Why in the world did the world saying that was a robbery? I take that like it’s cruel, because the best thing that can happen is I can get the best redemption ever. I know for a fact that you’ve never been in a position where you got redemption, so you don’t know how it feels. I’m very blessed and I’m glad for the changes that I’ve made outside of boxing. I represent a much larger city that’s got my back. Not just the city, but I got a lot of people. I’m the people’s champ all around the world. My popularity has grown since a robbery, you know what I mean?” 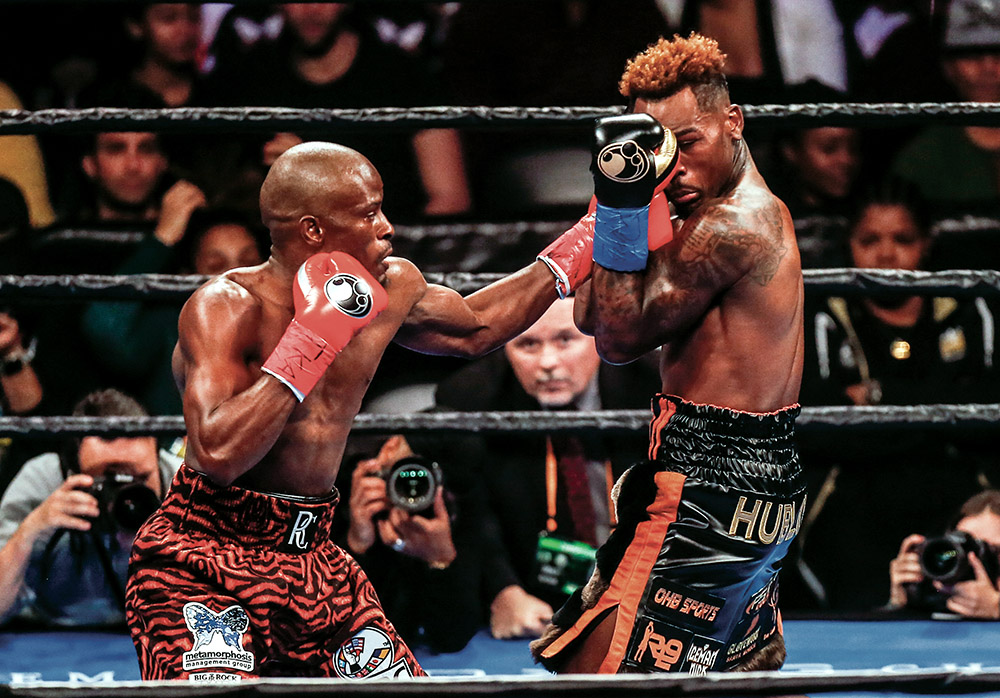 Charlo admitted the loss affected him at first but seems over it now, especially with a large backing of media and fans who unofficially scored it in his favor. Charlo brought up the idea of wanting judges with fighting experience, but outside that pipedream he’ll have to take it all out on Harrison in front of a new set of judges in Nevada.

“Like he said, you totally are correct, don’t nobody get a chance to redeem their losses because I sure didn’t,” Harrison responded. “But it sure shows you where I’m at and how confident I am in beating this fool again. It just shows you where I’m at and who my character is as a man and what I say about myself. I don’t need nobody to cosign me. Three judges said you lost. How many people outside your circle say you won? You lost! Three judges — all championship judges — I don’t understand where this clown is getting these statements from.

“It was Lion’s Promotion! Do you not understand?”

Harrison, 28, didn’t stop there when it came to the promotion — pointing out what he thought it was a biased broadcast on FOX — but, like Charlo and his gripe with the judges, all he can possibly do now is convey that disdain on his rival.

“I’ve been training,” said Charlo. “I take this like a wake up. I love what I do, and I’m glad I kept my composure with this individual because I would do something really bad to him right now, but I have to think about my career first. Like I said, keep your cool Piru. I’m different. I don’t play that. I don’t care what you say — you’re gonna respect me — keep running your mouth. You fucked up.”

Charlo, 28, expects a big year in 2019 and sees he and Jarrett Hurd unifying — something that would’ve happened immediately had he got the nod. Though, that’s certainly in play for the winner on June 23rd. Charlo says he wouldn’t offer a rematch in the event of a win against his rival because he’s “already beaten him” but Harrison said a clause was “never needed” in order to prove his argument anyway. Both now go on to their respected camps training off the energy built-up from being near each other again, which could make for a dramatic affair the second time round with these new mindsets fueling their desire.

“The worst thing you can spark is a muthafucka from Detroit, and when I say he sparked me, in any given moment, it can go down,” Harrison said. “That’s where I’m at with him. He’s not the only one who can be sparked. He not the only one with the fuel to be lit and I’m lit. Just like him, I’ve been training. I’ve been ready for the same outcome. I don’t like him. You’re a cornball… Much respect to you and the guys around him. It has nothing to do with his team. It’s personal to me though. It’s just me and him. It’s just one of those things that I just got a personal vendetta for him. He probably has a personal vendetta for me.

“Controversy was the best thing that could happen because I wanted to fight him again anyway. But come June 23rd, just look forward to a good fight.”