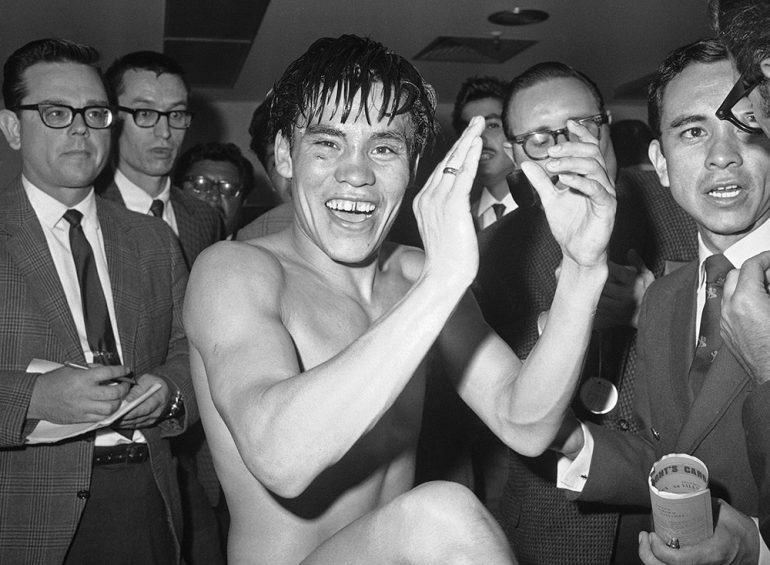 Ruben Olivares in dressing room on May 23, 1969 at Los Angeles after knockout victory over Tokyoís Takao Sakurai. (AP Photo)
10
Jan
by Anson Wainwright

Editor’s Note: This feature originally appeared in the December 2017 issue of The Ring Magazine.

Ruben Olivares is remembered fondly as one of the most exciting – and best – fighters in history.

Olivares became immensely popular among Mexicans and action-loving fans worldwide because of his ferocious fighting style, chilling punching power (particularly his left hook to the body) and winning ways over a career that extended beyond two decades.

“Look at his number of knockouts,” the late Hall of Fame writer Bert Sugar once told The Ring. “He was a dual champion. He was never in an unexciting fight. He had a left hook from hell. Everything about him said ‘great fighter.’”

Olivares turned pro a few days shy of his 18th birthday, in 1965, scoring the first of 24 consecutive knockouts to start his career.

The native of Mexico City punched his way up the bantamweight rankings before winning his first titles by stopping WBA and WBC beltholder Lionel Rose in the fifth round at the Forum in Inglewood, California, an arena in which he fought 22 times.

He considers that his proudest moment in boxing.

Olivares would go on to face some of the biggest names in the late 1960s and ’70s, an era filthy rich with exciting fighters in the lower weight divisions. 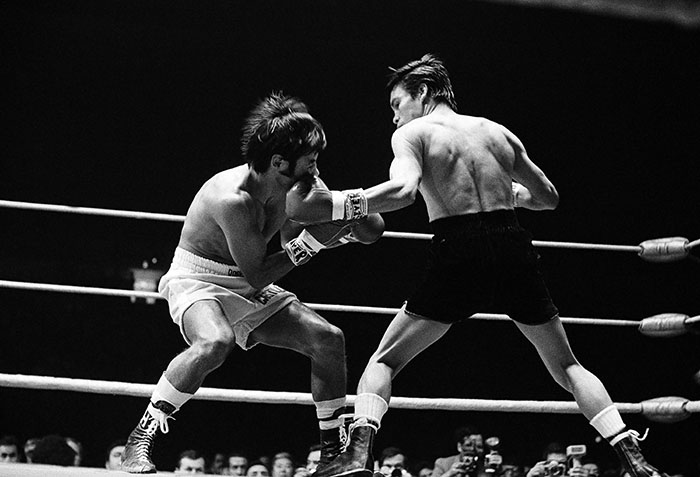 Challenger Ruben Olivares lands a left to chin of bantamweight champion Chucho Castillo during the first round of their title bout at the Forum in Los Angeles April 2, 1971.

He defeated Chucho Castillo in two of three classic wars, winning and regaining his titles in the process. He split two memorable fights with Art Hafey, including a knockout loss. He lost his WBA featherweight title to the great Alexis Arguello by stoppage. He won two of three fights against Hall of Famer Bobby Chacon, including a second-round KO that gave him the WBC featherweight title.

And, it seemed, he never let down fans hoping to be entertained.

Olivares’ last great victory was a second-round knockout of future star Jose Luis Ramirez in 1978, the only time the iron-jawed Mexican was stopped. Olivares initially retired in 1981, made one-fight comebacks in 1986 and 1988 and then left the sport for good.

Olivares, now 70, lives in Mexico City with his wife and has six grown children. He is still greeted with spirited applause at boxing events and keeps a foot in the sport. He said he trains a few boxers.

“I am looking for the next Ruben Olivares, with the left hook to the liver!” he said.

FASTEST HANDS
Chucho Castillo: We fought three times at the Fabulous Forum and went a total of 44 brutal rounds. I believe our trilogy defined both our careers. Chucho gave me my first defeat when the ring doctor stopped the fight in the 14th round because of a bad eye cut. His punches came at me really fast. Castillo had a lot of handspeed and he hit very hard.

BEST FOOTWORK
Kazuyoshi Kanazawa: Kanazawa really moved around a lot. He knew how to work the ropes really good.

BEST CHIN
Art Hafey: I fought Hafey the first time in Monterrey in 1973. I underestimated him at the time and figured it would be an easy win in Mexico. I remember seeing him at the hotel lobby early one morning. As he was getting ready to leave to do his morning roadwork, I was just getting back from a night of partying. In the fifth round, Hafey put me to sleep – a deep sleep.

STRONGEST
Eusebio Pedroza: At age 32, I made my final attempt to win a world title against him. He was younger and very strong, like a bull. His punches were really hard. We tried our best and made it to the 12th round, when I got knocked out.

SMARTEST
Pedroza: He was a master at slipping punches. I could never hit him because I couldn’t find him. He moved around so much.

BEST JAB
Alexis Arguello: This was the first defense of my featherweight title. … I was winning the fight through the first 12 rounds, pushing Arguello around, landing on him, staggering him at times. But he had the best jab I ever faced. When he threw his jab, he was always moving around. He had a very sharp, direct jab.

BEST PUNCHER
Arguello: Arguello stood his ground and then let go of his punches. He hit really hard. I think because I was a natural bantam that moved up to feather – and he was basically a lightweight that moved down to feather – that he was a lot stronger than me. He had explosive power. … I got careless in the 13th, got caught with an uppercut, and instead of trying to shake the cobwebs, I went at him. Big mistake.

BEST OVERALL SKILLS
Bobby Chacon: First of all, I was very saddened to hear about Bobby’s passing. We became friends after it was all over. A great champion he was. Chacon was never in a bad fight. He was a brave fighter who moved like a ring general. Chacon hit hard but he also took a lot of punishment in the ring. He showed patience in the ring. He was a good boxer-puncher who stood in there and gave it all he had.

BEST OVERALL
Jesus Pimentel: There were three really tough ones: Pimentel, Bobby Chacon and Art Hafey. I would say Pimentel was the toughest. He had big cojones, he boxed and he put up with a lot of punishment. Bobby Chacon, too. I beat Chacon two out of three fights. Art Hafey – a great, great boxer. Tough. He threw a thundering right hand.