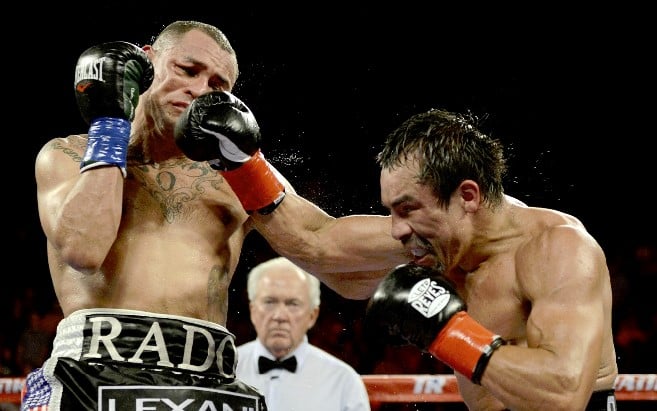 Editor’s Note: This feature originally appeared in the August 2016 issue of The Ring Magazine.

It took Juan Manuel Marquez 10 years to win a world title but once he did he didn’t stop, going on to win a total of eight major titles in four weight classes. He is one of only three Mexicans to win belts in four divisions.

And, if strong rumors were true, many top fighters in and around Marquez’s weight class wanted nothing to do with him because of his obvious ability. Naseem Hamed was said to be one of those fighters.

However, eventually, Marquez became impossible to avoid because of his success, evolved into a more entertaining fighter and built a career that will eventually take him to the International Boxing Hall of Fame.

“Dinamita” lost his 1993 debut by disqualification but won his next 29 fights to earn a shot at unbeaten WBA featherweight titleholder Freddie Norwood in September 1999. The challenger dropped a unanimous decision that many believed he deserved to win.

Undeterred, Marquez set about earning a second title shot. He won his next 10 fights (nine by knockout) to land a fight with old warhorse Manuel Medina for the vacant IBF crown in February 2003. Marquez won this time, stopping his countryman in seven rounds.

Marquez considers it his proudest moment.

“I had my first chance when I was 26 but, simply, the judges denied me the opportunity,” Marquez told The Ring. “Four years later I won my first world championship, defeating ‘Mantecas’ Medina. That was such a great moment.”

On the flip side, it was the four-fight series with Manny Pacquiao, beginning in May 2004, that would cause so much frustration for Marquez. It got off to a horrible start as he went down three times in the first round of the first fight. The Mexican master worked his way back into the contest but had to settle for a draw after 12 hard-fought rounds.

Marquez and Pacquiao couldn’t come to terms on an immediate rematch so the Mexican went another direction that included the surprising decision to go to Indonesia, where he lost a 12-round decision to the talented Chris John.

Once again he had to work his way back into the mix. In 2007, he won a world title in a second weight class by outboxing Barrera

Pacquiao eked out a razor-thin split decision in their second fight and three years would pass before number three. In the meantime, Marquez picked up the Ring lightweight championship against Joel Casamayor and won two more titles with a hard-fought stoppage over Juan Diaz.

Then came the most one-sided setback of his career. When Floyd Mayweather Jr. ended his first retirement, he chose the smaller Marquez as his opponent. Mayweather won by a near-shutout decision. Curiously, although Marquez was pressed by The Ring, he didn’t pick Mayweather in any of the 10 categories here.

Marquez lost a majority decision in the third fight against Pacquiao even though some observers thought he did enough to win. But in the fall of 2012, when Marquez met Pacquiao for the fourth time, there were no questions. In the final seconds of the sixth round, while behind on the scorecards, Marquez landed a picture-perfect right cross that knocked Pacquiao out cold.

“I believe that all my fights were important to conquer four different divisions,” he proudly proclaimed. (Marquez gained an interim 140-pound title against Sergey Fedchenko between the third and fourth Pacquiao fights and was later upgraded to full status.) “But if I had to choose one, I choose the last fight with Manny due to how it ended.” 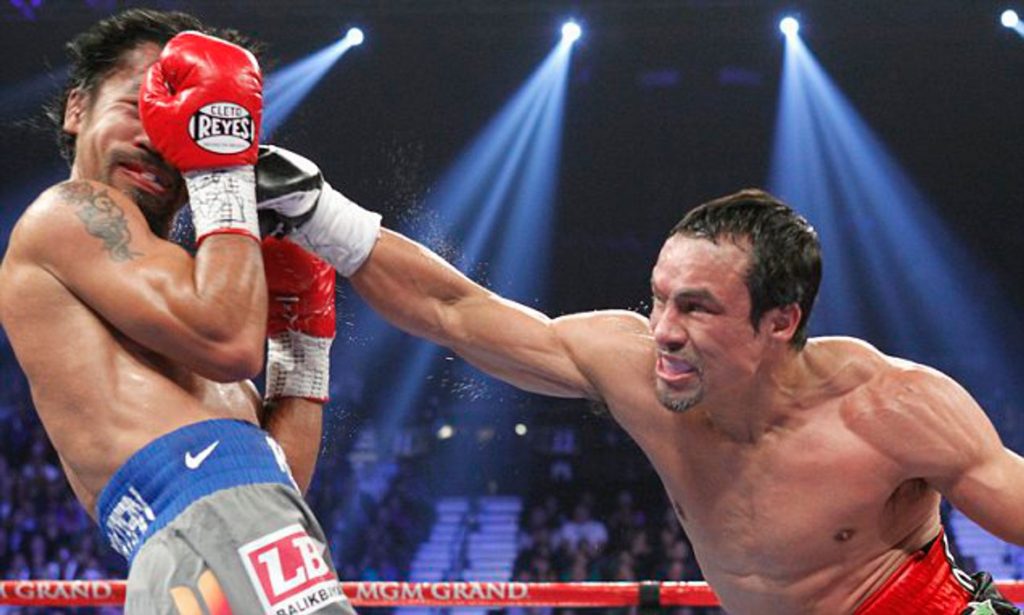 Marquez blasts Manny Pacquiao with a right in their fourth encounter. Photo courtesy of Reuters.

Marquez (56-7-1, 40 knockouts) last fought two years ago, outpointing Mike Alvarado at the Forum in Inglewood, California, where he made a name for himself in the mid-1990s. However, he has said he hopes to return to the ring this summer. Now 42, he lives in Mexico City with his wife Erika and three children. He keeps busy with several activities, including dabbling in the real estate business.

“I would like to teach boxing to the youth, making a difference with my promotion enterprise,” he said. “The Mexican Boxing Federation offered me (the opportunity) to participate in a great project. I believe I would be able to do great things.”

Marquez agreed to speak about the best fighters he fought in 10 categories:

BEST JAB
Marco Antonio Barrera: When you want to dodge a jab using speed, you must calculate it. That is what I did with him. I tried to guess where his punches were going and then counterpunch and decrease their accuracy.

FASTEST HANDS
Pacquiao: He has a lot of power and speed.

FASTEST FEET
Pacquiao: He is always everywhere. He is a tough fighter.

SMARTEST
Sergey Fedchenko: The Ukrainian fighter, no one knew him. He had a great counterpunching (style), speed and a great jab. He was very intelligent also. Manuel “Mantecas” Medina was also very smart.

STRONGEST
Pacquiao: When he fought, he moved his hips a lot. Then I analyzed that all his power came from there, in the hips. I understood that he couldn’t do his power moves and he would have problems if I used speed so I started fighting different.

BEST PUNCHER
Pacquiao: In all the fights I had, nobody hit me harder than him.

BEST DEFENSE
Pacquiao: He is great at closing his defense, he has a good guard and it is very hard to land (a clean punch). After four fights with him, I was able to know him better. I also learned his mistakes. Fedchenko also had great defense.

BEST SKILLS
Juan Diaz: Juan has a lot of speed. He was aggressive and elusive. On the other hand, Joel (Casamayor) was great with the distance and he was a brilliant fighter.

BEST OVERALL
Pacquiao: Without doubt, the best pound-for-pound of his time and I faced him at his best.