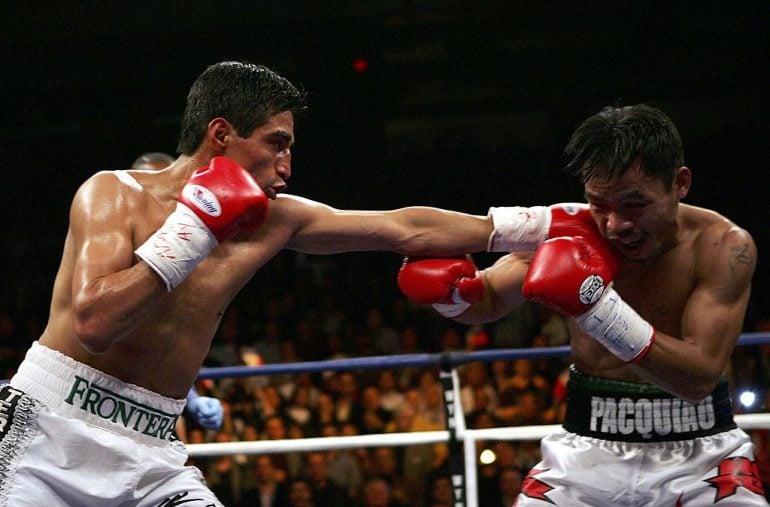 Editor’s Note: The feature originally appeared in the November 2013 issue of The Ring Magazine

In his prime, and even as his hall-of-fame career began to wind down, there was no better elite-level warrior than Erik Morales. Few fighters of the past 20 years were as consistently entertaining against the sport’s best as the Tijuana native, who produced fight-of-the-year ring wars and instant-classic trilogies with fellow first-ballot hall of famers Marco Antonio Barrera and Manny Pacquiao.

Following a 2¾-year “retirement,” Morales won a hard-fought 12-round decision over former lightweight beltholder Jose Alfaro in a welterweight bout this past March. Sadly, the speed, power and reflexes that aided “El Terrible” in winning his first 41 professional bouts — a nine-year win streak that included victories over seven titleholders, including Barrera and Junior Jones — were gone.

However, the fierce pride and warrior spirit — intangibles that made the Mexican star special — remain, as evidenced by a recent interview Morales (49-6, 34 knockouts) gave The Ring after a Los Angeles press conference announcing his second comeback fight against Scotland’s Willie Limond (33-2, 8 KOs) in a pay-per-view-televised bout Saturday from Mexico City.

Morales, 34, agreed to take part in The Ring’s Best I faced series, the periodic feature that asks the most accomplished fighters of our generation to list the best they’ve fought in 10 important categories. The former three-division titleholder had a difficult time with the first category, BEST FIGHTER.

The obvious choice is either Barrera or Pacquiao, two arguably great fighters who Morales beat in the first bouts of their trilogies but lost the following two fights to each. However, the salty veteran refused to bestow that honor on either man. “El Terrible” takes his rivalries seriously.

In this way, Morales is no different from Joe Frazier, who resents Muhammad Ali to this day, or Marvelous Marvin Hagler, who maintains that he won his showdown with Sugar Ray Leonard.

“What do you mean by that question, ‘Who’s the best fighter?'” Morales asked through interpreter Ricardo Jimenez. “Are you talking about the most complete fighter? The best skilled?”

“All of the above,” this writer replied. A second later a fan who attended the press luncheon at downtown L.A.’s El Paseo restaurant blurted out in Spanish: “Come on, Terrible! You know it’s Barrera!”

If you believe the animosity between Morales and Barrera was contrived to sell tickets, think again.

“Ask the other questions,” Morales said after silencing the fan. “We’ll come back to this one.” 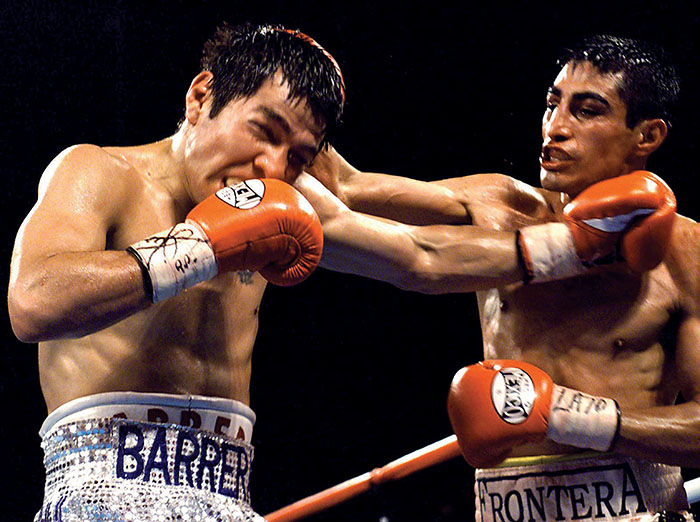 Action from Barrera vs. Morales I. Photo by John Gurzinski/AFP/Getty Images

Morales was happy to answer the other categories:

BEST BOXER
Junior Jones: This is a tough question. I faced a lot of good boxers in my career, but I think Jones might be the best. He had very good technique. He threw straight, accurate punches. He could punch too. He hurt me in our fight.

BEST PUNCHER
Jones: I really felt it when he connected. I remember freezing for a second in the second round of our fight when he caught me with a right hand.

QUICKEST HANDS
Manny Pacquiao: Pacquiao had the quickest hands. Jones was faster with single punches from the outside, but Pacquiao could deliver four or five quick, short punches in combination in the blink of an eye. Both guys had the kind of speed that you couldn’t see.

QUICKEST FEET
Hector Acero-Sanchez: He kept running or walking around the ring the entire fight. I never knew where he was going or what he was going to do. I just wanted to fight. It was a frustrating night.

BEST DEFENSE
Acero-Sanchez: I had a hard time finding him. He kept his gloves up and he never stopped moving in and out and around me.

BEST CHIN
In-Jin Chi: That was one very tough guy. I should have knocked him out with the number of hard punches I landed to his chin, but he just kept coming forward all night. He was strong and he had great conditioning.”

BEST JAB
Zahir Raheem: Everything he did was off his jab. That was his key punch. He was all about the jab, and that jab gave me trouble.

STRONGEST
Pacquiao: Often guys who are as muscular looking as he is aren’t that strong in the ring, but he is strong. Very strong. Chi was physically strong, too. He had the strength to push me around and wrestle with me on the inside, but Pacquiao was more explosive. He is a very powerful man in the ring.

SMARTEST
Raheem: I never liked the way he fought and I didn’t like that fight for me. I knew it would be difficult. I didn’t have the best camp for Raheem, but even if I had had a great camp, he would have been frustrating because he’s so cagey.

When it was time for Morales to answer the BEST FIGHTER category he was still clearly uncomfortable with the question.

“If you’re talking about the toughest opponent I’ve faced, to be honest, his name was Erik Morales,” he said in all seriousness. “When I did things the right way and had proper training, boxing was easy for me, but all too often I did not do that. So, as you know, I had a lot of struggles.

“Honestly, I had too many tough fights to say one man was tougher than all the rest. I know fans want me to say that it was either Barrera or Pacquiao, but I don’t see it that way. That’s not how a fighter views things. There are fighters who people have forgotten about or never knew that were the toughest fights, the biggest fights for me at the time I fought them.

“Jose ‘Pepillo’ Valdez was the toughest fighter I had ever faced back when I was nothing. That fight [TKO 3 in 1994] was the biggest fight for me when I was just a Tijuana prospect.

“Enrique Jupiter (TKO 6 in 1995) was the toughest I faced when I moved on to the next level and was regarded as one of Mexico’s best young fighters. I had to beat him in order to show that I was going to go somewhere in boxing.

“Junior Jones (TKO 4 in 1998) was my biggest fight when it was time for me to prove that I could go to the next level, from a champion to one of the fighters rated pound for pound. And from then on it was just tough fight after tough fight.

“My fights with Barrera and Pacquiao are among those tough fights, but I don’t see them as being any more special than my tough fights with (Wayne) McCullough, (Guty) Espadas, Chi, (Jesus) Chavez, (Carlos) Hernandez and (David) Diaz. I’ve had so many wars I forget some of them. You or anyone else can probably put together a Top 20 list of my toughest fights.”

That’s why Morales is a modern legend.
ALSO AVAILABLE AT RINGTV.COM