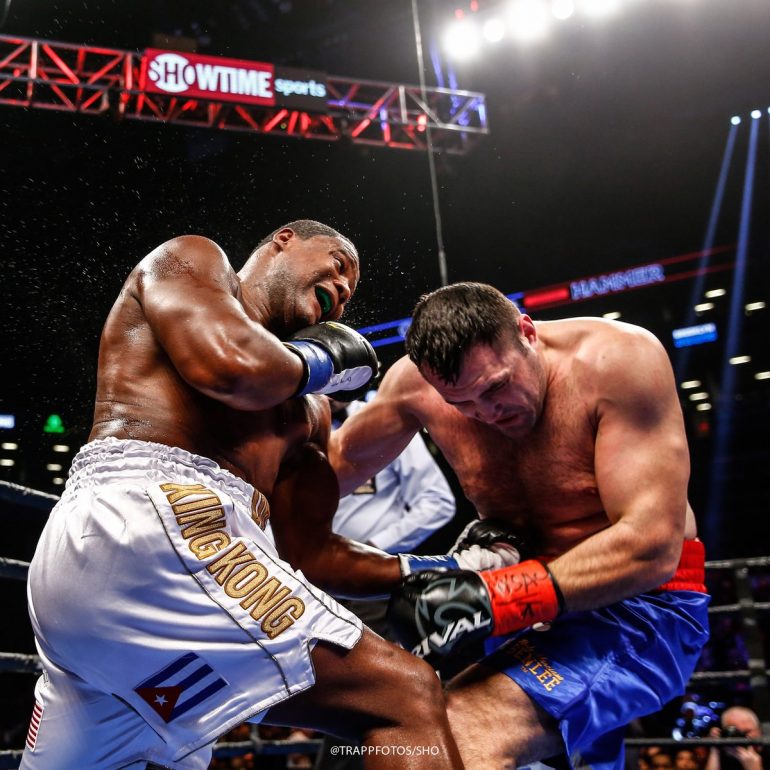 NEW YORK — There was no way Luis Ortiz and Christian Hammer understood each other. Ortiz, from Cuba, speaks Spanish, and Hammer is Romanian.

But there was an unavoidable line of communication that was going between the two heavyweights Saturday night in a scheduled ten-rounder before an announced 7,329 at Barclays Center on Showtime Championship Boxing.

Hammer wore a chintzy smile, shook his head, nodded a few times, and even wiped his bloody nose.

It’s not a good idea to stir the ire of someone like Ortiz. The Cuban stoically came forward, backing Hammer up, pecking away with his jab and mixing that in with straight lefts and occasional left uppercuts.

Ortiz won, though he couldn’t have been satisfied. The Cuban expatriate wanted to win the fight on his punishing terms. He wanted to show the rest of the heavyweight division that he was as formidable as he was a year ago, when he gave WBC heavyweight champion Deontay Wilder a scare.

Whether Ortiz’s unanimous decision over Hammer (24-6, 14 knockouts) did that is left for conjecture. The judges had no doubt. Judge Joseph Pasquale had it a shutout, 100-90, while judges John Basile and Waleska Roldan each had it 99-91 for “King Kong.”

Ortiz (31-1, 26 KOs) did a lot of things well. He moved very well on his feet, he flicked his jab with consistency, and his power was still lethal. He wanted to get rounds in, though the full ten may not have been part of Ortiz’s game plan.

“Every heavyweight out there should know that I still have it at 40. Anthony Joshua, Deontay Wilder, I’m ready. I fought a fight that I hadn’t for years, which is box and work. So, I’m not disappointed I didn’t knock him out. I showed some of my boxing skills tonight.

“The most important thing tonight is that I’m helping my daughter. The doctors are here for my little girl and we’ll see what happens.”

In the first round, Ortiz kept pawing at Hammer with his right-handed jab. Hammer seemed very cautious. He did, however, land a few straight rights. But after one, Ortiz looked comfortable.

The second saw Hammer land a right to Ortiz’s body, and then followed with a left hook, which caused Ortiz off balance. Referee Shada Murdaugh did not rule it a knockdown. A replay showed Ortiz used his left glove to stay on his feet, but it wasn’t caused by a punch.

With just under a minute in the round, Ortiz slammed a left to the body. Hammer didn’t know what to do. But the shot got his attention and he backed up. Ortiz followed, though couldn’t land anything substantial to close the round.

In the third, Hammer was visibly gulping air. Ortiz landed a big left uppercut in the fourth, which forced Hammer into the ropes.

Ortiz had his nose bloodied in the last minute of the fifth. Ortiz closed the fifth with a straight left that backed Hammer up. The German, of course, reacted the way he had throughout the first four rounds, with a smirk on his face and shaking his head.

In the latter portions of the sixth, Hammer stayed a safe distance away from Ortiz. The smile was gone. The histrionics were absent. The nods and head shaking weren’t apparent.

“Ortiz is a very good and experienced fighter,” Hammer said. “He’s technical and smart but he’s not as intimidating as people say he is. I respect Ortiz, but I don’t think he’s the best fighter I’ve ever faced.

“I’m very confident going forward. I know that I can go the distance with anyone and I’m willing to fight anyone. People thought I’d get knocked out but I proved them wrong.”

After six, it was entertaining. Hammer didn’t succumb to Ortiz’s power. But after the fifth, his work rate appeared to drop considerably. What couldn’t be hidden was the fight was terribly lopsided. It seemed a matter of time before Ortiz, who will turn 40 later this month, ended the fight.

The pace slackened in the seventh.

Still, Ortiz was easily ahead. Hammer was in survival mode, just hoping to last the decision.

Ortiz’s corner implored him to continue boxing, to use his jab. Hammer was urged to go out for the 10th as a “Romanian bear.” He was more like a hibernating bear, happy he just survived.