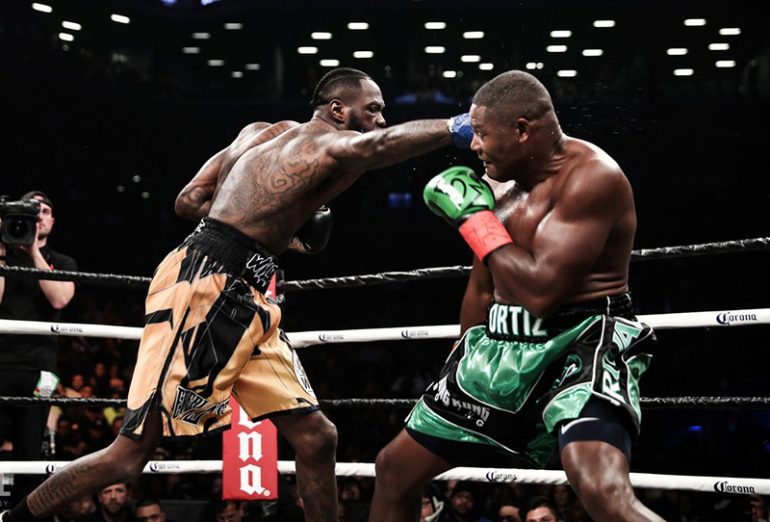 NEW YORK – Deontay Wilder waded through the boos, and gave fans a reason to cheer in the end.

Wilder survived a life-and-death struggle with Luis Ortiz, dropping him in the fifth and 10th rounds to retain his WBC heavyweight title on Saturday at Barclays Center in Brooklyn, N.Y. The official time of stoppage in Wilder’s seventh title defense was 2:05.

Wilder did more than just hang on to his belt, he gave stateside audiences a reason to get excited about heavyweight boxing again.

“’King Kong’ ain’t got nothing on me!,” exclaimed Wilder (40-0, 39 knockouts), borrowing a line from the 2001 film Training Day and an obvious play on Ortiz’s nickname. Denzel Washington, who made that line famous, was among the 14,069 in attendance.

“Luis Ortiz was one of those fighters that everyone ducked, even champions ducked him. I wondered why it took so long for him to get a title shot and now we know.”

After a slow-paced first four rounds, Wilder got the crowd cheering again by scoring a knockdown on a straight right hand worthy of those “Bomb Squad” chants. Ortiz was badly hurt, but was saved by the bell. Wilder came out to finish what he started in the sixth, landing a number of hard right hands which Ortiz had seemingly forgotten how to evade.

And then the bout went to Fight of the Year territory. 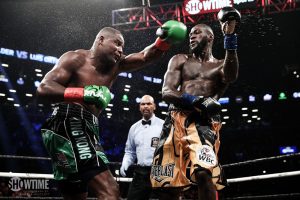 With Wilder looking to bomb out his unbeaten Cuban foe, Ortiz turned it around with a counter right hook in the seventh which turned Wilder’s legs to spaghetti. A follow-up assault lasting approximately a minute had Wilder rag dolling about the ring, unable to tie up or defend against Ortiz’s blows. All three judges scored the round 10-8 for Ortiz.

Ortiz failed to finish Wilder, and after surviving a tough eighth, Wilder began to come back alive as an arm-weary Ortiz struggled to keep up. Ortiz was reintroduced to the canvas in the tenth from another right hand and a subsequent volley of shots. He rose up on unsteady legs but went back down shortly after, compelling referee David Fields to wave the fight off.

“A true champion always finds a way to come back and that’s what I did tonight,” said Wilder. “Luis Ortiz is definitely a crafty guy. He put up a great fight. We knew we had to wear him down. I showed everyone I can take a punch.”

The fight built excitement for a title unification bout between Wilder and the winner of IBF/WBA beltholder Anthony Joshua and WBO claimant Joseph Parker. Wilder and Parker are set to meet on March 31 in Cardiff, Wales, and the 32-year-old Wilder wants his shot at the winner next.

“I’m ready right now. I always said that I want to unify. I’m ready whenever those guys are. I am the baddest man on the planet and I proved that tonight. This solidified my position at the top of the food chain tonight.”