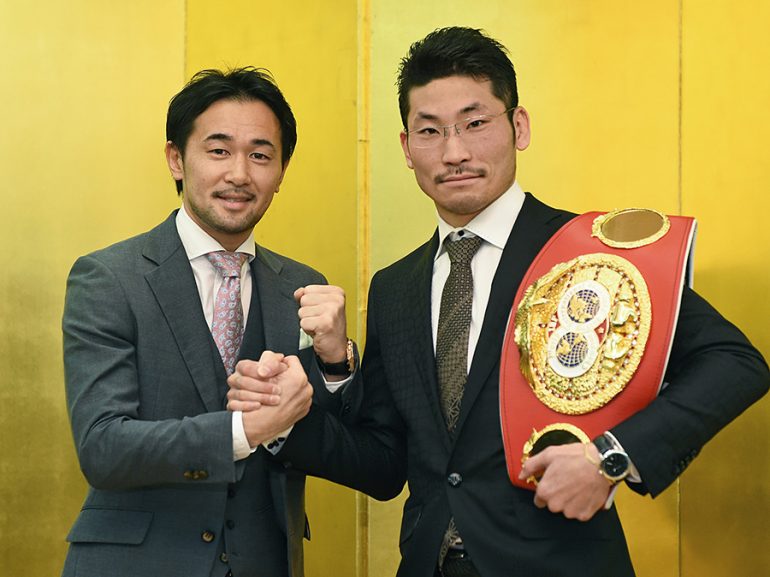 Shinsuke Yamanaka (left) and Ryosuke Iwasa at the press conference to announce their co-featured bouts to take place on March 1 in Japan. (Photo by Naoki Fukuda)
06
Jan
by Ryan Songalia

After the shock and ensuing controversy of their first fight, Luis Nery and Shinsuke Yamanaka are set to fight for a second time on March 1 at Kokugikan in Tokyo, Japan.

It’ll be the first time Yamanaka enters the ring as a challenger after his six-year reign as WBC bantamweight champion was ended abruptly in August by Nery, who blitzed the Japanese star in Kyoto and stopped him in the fourth round to hang the first loss on his record. It was a surprising loss for Yamanaka, holder of the RING championship at 118 pounds and an entrant on the pound-for-pound list at the time.

Shortly after the fight, the WBC announced that Nery (25-0, 19 knockouts) had tested positive for zilpaterol in a pre-fight screening administered on July 27. The WBC described zilpaterol as “very similar to” clenbuterol, the banned substance that a number of high-profile fighters have tested positive for in recent years. Following an investigation, the WBC decided not to strip Nery of the title, attributing the finding to contaminated beef consumed in his native Mexico.

THE RING reinstated Yamanaka as champion and dropped Nery from the ratings in line with the performance-enhancing drugs protocol.

No banned substances were found in three subsequent screenings in Japan.

Yamanaka, 35, had previously announced his retirement after the defeat but changed his mind when the WBC ordered an immediate rematch with the 23-year-old Nery.

“To be honest, I’ve been training thinking that I want to avenge the loss to (Nery),” said Yamanaka (27-1-2, 19 KOs) at a press conference on Friday, according to Japan Times.

“I couldn’t end my career that way.”

Nery has fought once since then, stopping Filipino fighter Arthur Villanueva in six rounds in a non-title fight in November.

The co-main event will feature Ryosuke Iwasa (24-2, 16 KOs) of Kashiwa, Japan making the first defense of his IBF junior featherweight title against Ernesto Saulong (21-2-1, 8 KOs) of Santa Rosa City, Philippines. The southpaw Iwasa, 28, won the title in September with a surgical performance against Yukinori Oguni, stopping him in six rounds. Saulong, also 28, has won three straight and will prepare for this fight by training and sparring with IBF junior bantamweight titleholder Jerwin Ancajas at Survival Camp in Magallanes, Philippines.