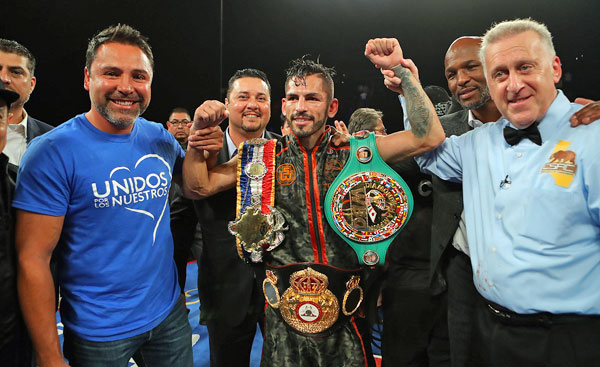 Jorge Linares: For three rounds, the RING lightweight champion looked as if he should be considered for the pound-for-pound Top 10. For the remaining nine, he looked vulnerable.

Linares was fortunate to emerge with a split-decision victory over Luke Campbell in defense of his RING and WBA titles Saturday at the Forum in Inglewood, California. The Venezuelan was brilliant in the early rounds, baffling Campbell with his all-around ability and putting the British fighter down with a straight right in Round 2.

It looked as if a rout was on. And then it wasn’t.

Campbell found a groove, fighting tall behind his long jab and landing enough power shots to keep Linares honest. I wouldn’t say that Linares was neutralized but he certainly was less effective in the middle rounds, which allowed Campbell to climb back into the fight. Linares had to rally in the final rounds to win and, to his credit, he did.

“I was surprised that Linares stopped throwing combinations,” said Oscar De La Hoya, the Linares’ American promoter. “Every time he threw three punches, he always landed the third punch. Then he started throwing one punch at a time.”

In the end, it was a solid performance from Linares. The problem is that many expect a lot more than “solid” from Linares, who I call “the beautiful boxer” because of his combination of skill, speed and athleticism.

I would give Linares (43-3, 27 knockouts) a chance to beat anyone around his weight class but I wouldn’t favor him over some. That includes fellow lightweight titleholder Mikey Garcia, a prospective opponent. I’ve thought for some time that Linares’ style – constant movement – would give Garcia some trouble but eventually the American would cut off the ring and stop him.

Nothing I saw on this past Saturday changed my mind.

Luke Campbell: This is a case of winning in spite of losing.

Campbell (17-2, 14 KOs) was a respected fighter going into Saturday night. He won a gold medal in the 2012 London Olympics, which made him a notable figure in the U.K. He had only one loss as a professional, to Frenchman Yvan Mendy when Campbell wasn’t at his best. But he had never faced an opponent anywhere near Linares’ ability.

The matchup gave us a good opportunity to gauge how good Campbell really is. The reviews were good.

And he did all that with a heavy heart: Campbell lost his father to cancer a few weeks before the fight, which makes his performance all the more remarkable.

Campbell might’ve won the fight had he fought with more urgency the last few rounds, when Linares picked up his pace just enough to pull out the decision. Judge Max DeLuca, who scored the fight 114-113 for Linares, gave the winner the 11th and 12th rounds. Had Campbell won just one of those rounds on DeLuca’s card, he would’ve won the fight.

An opportunity was lost. Had Campbell (17-2, 14 KOs) won, given the magnitude of his accomplishment and his Olympic pedigree, he probably would’ve been the second biggest boxing star in the United Kingdom after Anthony Joshua.

The fact that didn’t happen must be painful for him and his handlers, who obviously traveled to Los Angeles to win.

Campbell made a strong statement in defeat, though: He proved that he belonged in the ring with one of the most talented fighters in the world. And he made it clear that the best is yet to come.

The fight was a lot closer to the 114-114 card of Rocky Young (U.S.) than it was to the cards of his colleagues. Either fighter could’ve won.

I can speculate as to why Madfis and O’Connor scored the fight as they did; Parker pushed the action from beginning to end, which many judges seem to believe is imperative to win a fight. A largely frustrated Parker didn’t land many punches, though.

That can be attributed in good part to Fury, whose defensive skills are impressive for such a big man (6 feet 6 inches). Plus, he did a nice job countering here and there when Parker rushed inside.

Fury has to accept some of the blame for the setback. A fighter who fights in a defensive manner must be busier than he was to control a fight. He simply didn’t throw enough punches to argue that he was the victim of an unfair overall decision.

I thought he won the fight 115-113 but the same score for Parker would’ve been acceptable.

But 118-110 from two judges? Crazy. He and his handlers had the right to be livid after the decision was announced. And so do others who care about the sport.

Byrd’s absurd score tainted an entertaining fight between Canelo and GGG, which damaged the sport. The scores of Madfis and O’Connor left some of us with a similar feeling. The powers that be need to figure this out. It’s out of control.

Featherweight titleholder Oscar Valdez (23-0, 19 KOs) and Genesis Servania (29-1, 12 KOs) engaged in a wild, fast-paced scrap Friday in Tucson, as each fighter tried to end matters with every punch they threw and each went down. Valdez emerged with the victory but the fans also were winners. Question: How many wars like that can Valdez endure before they start to take a toll? That was a brutal fight. …

Gilberto Ramirez (36-0, 24 KOs) defeated Jesse Hart (22-1, 18 KOs) by a unanimous, but close decision on the Valdez-Servania card. Ramirez is a solid fighter but nothing special. Hart probably is no better than that. I’ll say this about the loser, though: I thought he was in over his head and finished in the second round, when he went down hard and was hurt. He not only survived that but battled back to make it close fight. No one can question his determination. …

Yunier Dorticos and Dmitry Kudryashov entered their cruiserweight World Boxing Super Series fight Saturday in San Antonio with a combined record of 42-1, with 41 knockouts. A stoppage seemed inevitable. And it was Dorticos (22-0, 21 KOs) who scored it, putting Kudryashov (21-2, 21 KOs) away with a big right hand in the second round. I still favor Oleksandr Usyk to win the WBSS tournament but Dorticos is a threat because of his power. …

Former four-division titleholder Nonito Donaire (38-4, 24 KOs) bounced back from his unanimous-decision loss to Jessie Magdaleno last November by outpointing Ruben Hernandez (22-3-1, 9 KOs) in a 10-round featherweight fight on the Dorticos-Kudryashov card. I don’t know what Donaire has left at 34 but his name carries some weight. He’ll probably get at least one more shot at a world title.