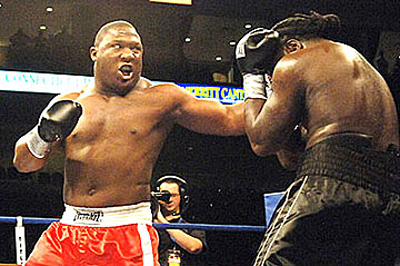 Deontay Wilder has sparred with Demetrice King, the only man to beat Bermane Stiverne in the professional ranks, in preparation for his Jan. 17 challenge to the WBC heavyweight titleholder.

“I’m not saying anything like he’s better than Bermane Stiverne,” said Wilder, a 2008 U.S. Olympic bronze medalist and the last American man to medal in Olympic boxing, “but Demetrice King is the only guy who knocked him out. So we’re learning a lot from him about Stiverne. He’s telling us a lot about the way he moves, the way he holds his hands.”

Others working with Wilder include Dominick Guinn, Nagy Aguilera, Domonic Jenkins and Jason Gavern, whom Wilder floored twice during a fourth-round stoppage victory in his last fight in August.

King (15-20, 13 KOs), a 29-year-old spoiler, stopped previously undefeated prospect Bowie Tupou the second round of his last victory in August 2009. The rugged journeyman has gone the distance with former title challengers David Tua and Kevin Johnson.

Of Stiverne’s 21 stoppage wins, 18 have come inside of three rounds, with 14 being in the first. Wilder, meanwhile, has gone four rounds four times, and scored 18 knockouts in the first round.

But when it comes to conditioning, Wilder insists that he’ll have the advantage down the stretch.

“Demetrice told me that when he gets tired, he’ll lay on the ropes, and he told me about his head positioning and some of the other stuff that he does,” said Wilder. “This has been a great camp, especially with this last group of guys that we’ve been training with. They were a great group, and I’m ready to get it on.”

If Wilder wins, the 6-foot-7 native and resident of Tuscaloosa, Alabama would become America’s first heavyweight titleholder since 2007, when Shannon Briggs lost a unanimous decision to Sultan Ibragimov, giving up the WBO strap he had won from Sergei Liakhovich seven months earlier.