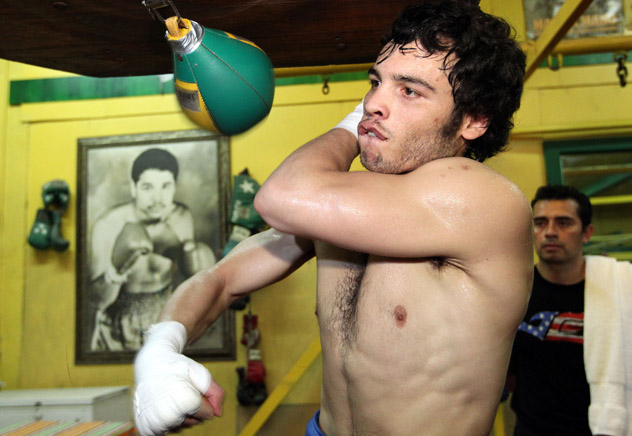 “I want to give all my fans an update on my boxing future. I had a great meeting on Friday with my team: My lawyer Howard Weitzman, my manager Al Haymon and Billy Keane. They have begun the process of setting up my next fight, which will occur in early 2015,” Chavez said in a statement to Yahoo!Sports. com.

“We are looking at a number of top opponents because I only want to fight the best moving forward. The details of my next fight will be finalized in the very near future. So stay tuned. I want to thank all my fans for their support and I can’t wait to get back to fighting. You’ll be seeing a lot of me in the ring in 2015.”

Top Rank CEO Bob Arum has been at odds with Chavez and the boxer’s manager Billy Keane over contractual issues, but insisted during an interview with RingTV.com early last month that his contract remained valid.

“Our position is and our lawyers tell us that we still have one more fight with [Chavez],” Arum told RingTV.com at the time.

Top Rank has filed suit against Chavez in U.S. District Court in Nevada alleging that the boxer owes the company one more fight, according to Yahoo!Sports.

Asked on Monday if his contract still was valid with Chavez, Arum said, “Yeah, absolutely.”

“This thing is in litigation. I’m not going to say anything,” Arum continued. “Just talk to our lawyers. The lawyers are handling it, and I can’t get involved in making any comments.”

Top Rank attorney David Marrosso, of the Los Angeles-based O’Melveny and Myers law firm, and his partner Dan Petrocelli could not be reached for comment.

It was back in June that Arum and Froch’s promoter, Eddie Hearn of Matchroom Sport, both informed RingTV.com that they were considering the matchup: Arum for late October in Las Vegas, and Hearn for later this year or in the spring of 2015.

In July, Arum asserted that talks were continuing for a potential bout between Froch and Chavez (48-1-1, 32 knockouts).

Back in May, Chavez turned down what Arum called “a crazy, unbelievable offer” to face WBA middleweight titleholder Gennady Golovkin in a non-title 168-pound bout that would have been part of a two-fight deal.

Keane said, however, that Arum had undervalued Chavez and treated the fighter unfairly during negotiations.

The son of Hall-of-Famer and former champion, Chavez, of Culiacan, Sinaloa, Mexico, is coming off a 168-pound unanimous decision over Bryan Vera in March, having won their previous bout by controversial unanimous decision in September 2013. Chavez-Vera I happened in California at a 173-pound catchweight because Chavez was not able to make the originally contracted limit.