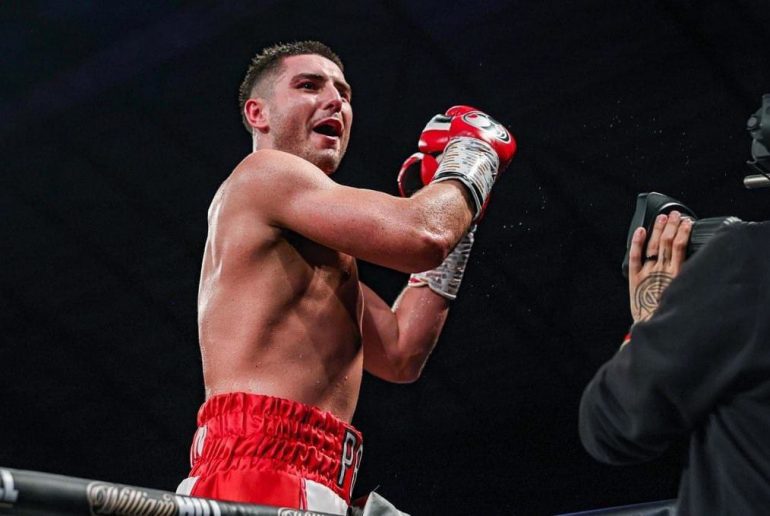 Hugely talented Olympian Josh Kelly scored a career-best 12-round unanimous decision over Troy Williamson to claim the British junior middleweight title in front of a packed crowd at the Newcastle Arena in Newcastle, England, on Friday.

The combatants, who both hail from the Northeast of England, entered the arena to a raucous reception. It was Kelly who settled faster, hurting the defending champion with an uppercut and then right hook in the opening minute, but Williamson bit down on his gumshield and got through the difficult moment.

Williamson closed the distance better in the second round and didn’t get caught flush like in the opener. However, Kelly looked calm under the pressure and had the better of things over the next couple of rounds, pot-shotting his rival from the back foot and regularly making him miss.

The flashy challenger showcased his elite-level movement of hand and foot in causing Williamson all sorts of issues in the fourth. Williamson looked to rough Kelly up and take him out of his stride but was reprimanded by referee Mark Lyson.

Kelly landed a big right cross in the fifth round. The follow-up assault left Williamson on unsteady legs midway through the round. “Trojan” Troy had some success, notably landing a right hand late in the fifth round, but he wasn’t able to really gain a significant foothold in the fight.

Williamson was warned again in the sixth for roughing up Kelly again, and while incumbent was full of effort, he wasn’t able to win rounds and was heavily down on the scorecards entering the second half of the fight.

The pattern continued, with Williamson following Kelly around and getting picked off with shots and unable to really get his best work off.

Kelly, who turned professional after the 2016 Olympics, was heavily hyped before he came unstuck against David Avanesyan (TKO 6) in a bid for the European welterweight title in February 2021. After the setback he had largely been written off as a fighter who had more style over substance. On this occasion, however, he showed he was in excellent shape and continued to box Williamson and have his way, never appearing to be in danger of falling apart in the championship rounds, as many had predicted.

“This British title means so much to us,” said a jubilant Kelly. “I boxed to instructions, boxed clever, didn’t take any risks. Troy was meant to do a demolition job on us, a hard-punching junior middleweight.”

Kelly’s longtime trainer, Adam Booth, was very happy with how his charge performed and believes this is just the start of the journey.

“I’ve said from day one he is the most talented fighter I’ve ever worked with,” said Booth, who previously trained David Haye, George Groves and Andy Lee and is the current trainer of Michael Conlan. “The only person who has beaten Josh Kelly up until now is Josh Kelly; he had to overcome monumental issues. We have now started to unearth the real potential.

Promoter Kalle Sauerland was also keen to wax lyrical about his fighter.

“There’s good boxers, there’s very good boxers and there’s special boxers, and I’m so proud of Josh,” said Sauerland. “All those critics, he stuffed those words back down their throats. The sky is the limit for him. There’s a reason he had that hype behind him at the beginning — the hype train is back on!

“It’s going to be an amazing journey next year. We’re very excited. Domestic fights, but really this world level; what we saw tonight is world-class. We’ll enjoy this moment because this has been a long time coming. This was a masterclass performance.”

Arthur (21-1, 15 KOs) was in his second fight since losing his unbeaten record to Anthony Yarde (KO 4) a year ago. Since then, the 31-year-old has had to rebuild, and if this is any evidence, then he’s on his way back. Arthur had things in hand and picked apart McIntrye (20-5, 5 KOs) before hurting him with a right hand, and then landed a combination that forced referee Ron Kearney to jump in at 1:46 of the second round.

“I knew he was a tough opponent, but I also knew I was levels above him,” Arthur said afterward. “I saw the right hand hurt him and his legs do a little bit of a dance. I thought, ‘Take your time, pick your shots, like you do in the gym.’ That’s what I did, and I got him out of there.

“I’ve got a big 2023 and I can’t wait for it. I’m excited to see what the future holds. I had a little setback getting beat by Yarde, but hopefully he wins that fight against [IBF, WBC and WBO light heavyweight champion Artur] Beterbiev and we can get the third [fight] cracking. If not, I’ll get my own world title [shot].”