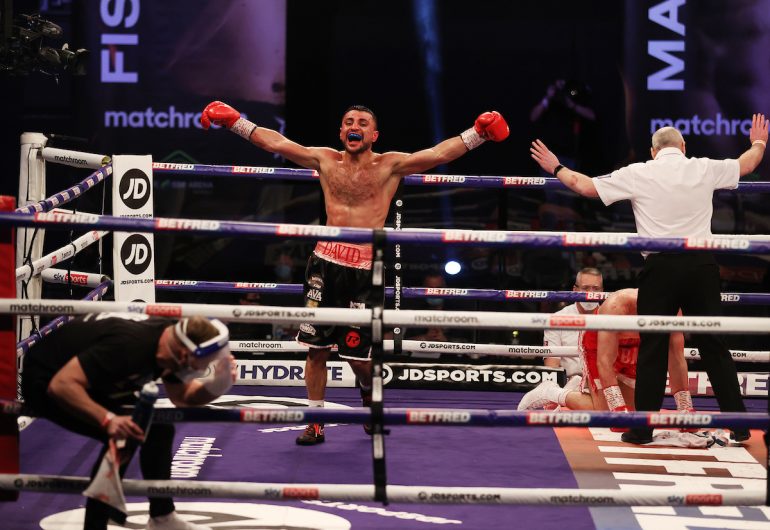 European welterweight champion David Avanesyan and Josh Kelly delivered the fireworks they’d promised for the best part of two years with a thriller at the Wembley Arena in London.

In the end, Avanesyan’s gutsy but intelligent pressure was the difference as he ground brave Kelly to a halt in Round 6, but what a fight they’d given us.

“I waited a long time for this fight,” said the 32-year-old. “I gave hard work many times. I haven’t seen my family, parents or children in a long time. Thank you for God and my English team.”

That team is made up of coach Carl Greaves and manager Neil Marsh.

“I told everybody what would happen and everybody thought I was a crazy coach who knows nothing,” said Greaves. “I’ve spent over five years with David now and he finds a way every time. He’s that good, I knew how it would go.”

Kelly was elusive in the first round. You could argue that Avanesyan was busier but he didn’t land significantly.

Sharp Kelly was beating the Russian to the punch and Avanesyan was having trouble coping with Kelly’s handspeed. The European champion was momentarily wobbled by a left hook. But as Avanesyan tried to get a foothold in the fight by becoming more physical, Kelly wound up bleeding heavily behind the left ear.

In the third Avanesyan slotted home some short right hands but Kelly was matching his output. It was a gripping affair and becoming the kind of fight many had hoped this oft-delayed showpiece would be.

The Russian worked away, trying to slow Kelly by attempting left hooks to the body.

“Don’t let him breathe,” shouted Greaves from Avanesyan’s corner. They wanted to suffocate the 2016 Olympian with pressure.

Both fighters were marking up. Kelly, who was cut near the right eye (caused by a headclash), was landing occasional check left hooks and moving off and as the champion pursued, Kelly would have to plant his feet and get stuck in to earn more respite.

Outworking Kelly was a key part of the Russian’s strategy.

The Russian started the fifth well. He was throwing plenty and now landing a good amount. Kelly, however, looked the bigger man and was still able to push Kelly back. It was a bloody, violent and gritty round but Kelly was standing up to the punishment. Avanesyan was starting to walk him back, however, and it all came crashing down for Kelly in Round 6.

He touched down initially from a series of right hands and after Avanesyan was allowed to follow up he caught Kelly with a big left hook. Kelly’s legs betrayed him and as he sagged backwards he just about stayed up but his coach, Adam Booth, sent the towel in. It was all over.

Referee Victor Loughlin accepted the stoppage at 2:15 of the sixth round.

“Sometimes you come up against a guy who will not be denied and tonight that was David Avanesyan,” said Hearn. “He was too tough and he deserves his success.”

He said Kelly had been “outmanned”, “outhustled” and “outfought”.

“I believe he should get a world title shot,” concluded Hearn. “Why not see him up there fighting Shawn Porter, Errol Spence, Danny Garcia, Terence Crawford?”