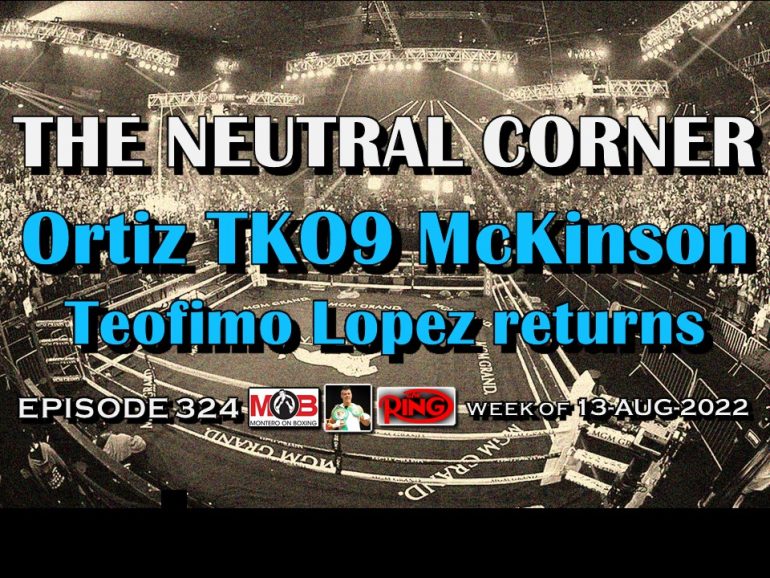 On episode 324 of The Neutral Corner boxing podcast, host Michael Montero returns from a two-week hiatus to catch up on all the latest news in the fight game.

According to reports, British heavyweight Daniel Dubois has filed a lawsuit against promoter Don King, for missing payment from his June 11 bout with Trevor Bryan in Florida. In other heavyweight news, Joe Joyce and Joseph Parker are set to fight on September 24 in Manchester, England.

On Saturday, July 30, veteran Danny Garcia made his junior middleweight debut a successful one, with a majority decision win over Jose Benavidez Jr. The bout headlined a TGB Promotions card that was broadcast on Showtime from the Barclays Center in Brooklyn, New York. It should have been a unanimous decision for Garcia, but Judge Waleska Roldan somehow rendered a terrible 114-114 scorecard.

Last Saturday, August 6, Michael Conlan rebounded from his TKO12 loss to Leigh Wood earlier this year, with a unanimous decision win over Miguel Marriaga in Belfast, Northern Ireland. That same night in Fort Worth, Texas, Vergil Ortiz Jr retuned from a year out of the ring to stop the previously undefeated Michael McKinson in a welterweight bout. The fight, which Ortiz won by TKO9 to improve to 19-0 (19 knockouts), headlined a Golden Boy Promotions card that was broadcast on DAZN.