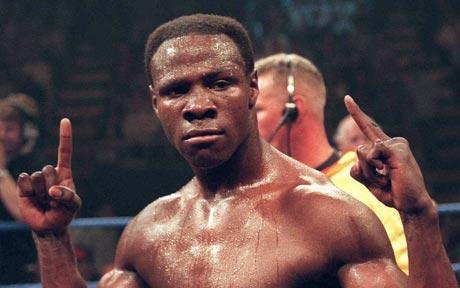 Only a few boxers every once in a while transcend the sport and hit the mainstream with the force of a hurricane. Today’s subject of our BOTD series is one of them.

Christopher Livingstone Eubank was born August 8, 1966 in South London, and immediately moved to Jamaica with his mother, where he lived until his sixth birthday. Upon his return to England, he lived a life of poverty. He was routinely expelled from school for fighting other students, and at the age of 16 he moved to the US where he resided in the South Bronx district of New York City with his mother.

Fully committing to boxing in his new town, Eubank followed up on the steps of his twin brothers Peter and Simon to train obsessively and competing in the local amateur circuit.

He made his professional debut in 1985 back in his homeland, shortly after his 19th birthday. Soon enough, he was making a name for himself in the British circuit and his name was being mentioned together with another fellow prospect by the name of Nigel Benn.

The rivalry between the two of them finally reached its pinnacle in 1990, when the pair finally faced off in Birmingham, England, with the WBO middleweight belt at stake.

In a fight that turned both fighters into instant celebrities, Eubank got the win in what would be the start of a series of two-fight rivalries with some of the best middleweights of his time. Eubank-Benn II ended in a draw three years later, and before that Eubank had two great back-to-back wins over Michael Watson at 160 and 168 pounds, in what marked his transition to the super middleweight division, where he would stay until the end of his ring days. Watson suffered a demolishing knockout in the second fight, suffering career-ending injures.

Eubank also went 1-0-1 against Ray Close, and then went 0-2 against Steve Collins towards the end of his career, when he was also defeated by future Hall of Famer Joe Calzaghe as well.

He finished his career with a 0-2 streak against Carl Thompson, with a light-heavyweight belt on the line.

His all-out, entertaining, boxer-puncher signature style along with his eccentric behavior turned him into a fan favorite and British boxing’s most visible superstar in the entire decade of 1990. He is now a TV personality, commentator, and adviser to his son Chris Jr., himself a boxer and a middleweight contender. His other son Sebastian (one of his four children along with Emily and Joseph) was also a boxer who died tragically in Dubai in 2021.