Peter Kahn has had a great year-and it’s July 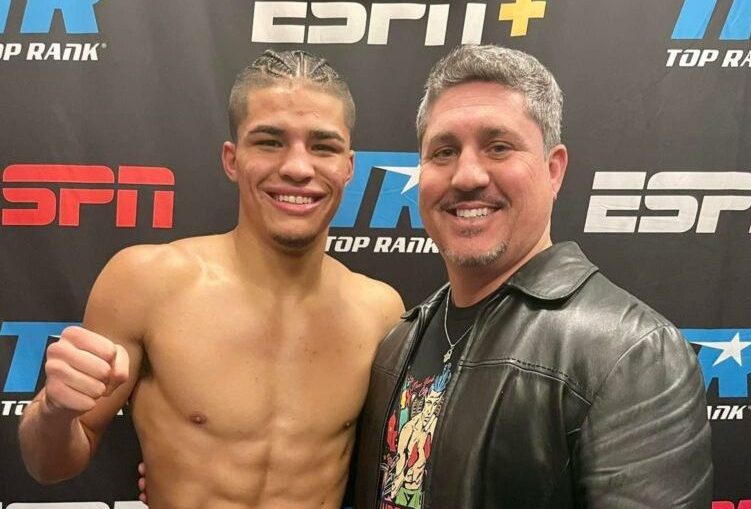 There was no give in Devin Haney’s victorious dressing room rocking in the bowels of Marvel Stadium, in Melbourne, Australia, on an early June afternoon. Everyone was pressed up against one another, chest-to-chest, belly-to-belly, shoulder-to-shoulder, and no one seemed to care. The festive occasion received a momentary pause when a bruised visitor suddenly arrived.

Haney waded through the pack to make sure he shook the hand of George Kambosos, who at the behest of his manager, Peter Kahn, made the good sportsman’s gesture to go over and congratulate the newly belted lightweight world champion. Kambosos and Haney exchanged pleasantries and complimented one another on their strengths and what surprised them about each other. As Kambosos was leaving, Bill Haney, Devin’s father, manager, and trainer, made an interesting gesture.

They’re often the unattached hand or the arm at the end of the victory line when fighters take their posed ring shots with their teams. That’s only what we see of the managers. They often do the heavy lifting without the fanfare to accompany it, and Kahn has quietly done a very good job six months into 2022 to make his fighters a pile of cash while getting them title shots. 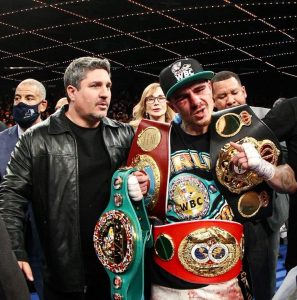 Peter Kahn took a chance with George Kambosos and guided the Australian to the lightweight world championship before his loss to Devin Haney in June.

He’s navigated junior middleweight prospect Xander Zayas to rising status as a burgeoning contender and somehow managed to get Emmanuel Tagoe a lucrative career-high payday against Ryan Garcia in April, got Chris van Heerden a career-high payday against Conor Benn, also in April, and got junior welterweight Aaron Aponte a sweet deal with Eddie Hearn’s Matchroom Boxing. In January, U.S. National Team lightweight Charlie Sheehy a deal with Top rank. He then topped it off by getting Kambosos a career-best, high seven-figure sum for the first Haney fight. Between Kambosos’ two fights with Haney, with the rematch scheduled for mid-October back in Australia, “Ferocious Kambosos” has a chance to make a combined total of over eight figures.

“What you’re looking at is Peter has great relationships with his fighters and he takes chances on kids that other people sometimes aren’t willing,” Hall of Fame promoter Lou DiBella said. “Kambosos was a chance because he was an unknown Australian kid. Look where George went. Xander Zayas was underage and look what’s happening to him. Peter trusts Javiel Centeno, who’s more than a trainer. Peter trusts Javiel’s judgement and in Xander, they have a great kid who’s been around George’s big events.

“Relationships with Peter’s fighters are really important to him. When he first started, he began with Don King, and he was the importance of the relationships with fighters. Peter was very instrumental of getting George the Devin Haney fight. George wasn’t very popular in Australia and Peter and I knew we had to strategize. When you’re not with a promoter that’s controlling a platform, you’re not getting the help of the ratings and you don’t have the ability to force a big fight. Another way to force a big fight is to become the mandatory. Peter was very effective in positioning George.”

DiBella said through the first six months of 2022, Kahn has had a good year.

“We don’t fight the fights; we create the opportunities and make the deals. We got 40,000 people in an Australian outdoor stadium on national American TV and the pay-per-view buys exceeded Manny Pacquiao-Jeff Horn. It was a big event. George changed his life and will get another opportunity in a rematch. Peter also helped Franchon and she’s now undisputed and George made a fortune. Peter certainly has to be considered Manager of the Year for 2022. He’s certainly been on a good roll.” 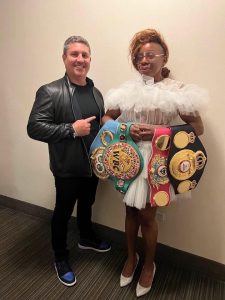 Kahn, pictured here with Ring’s super middleweight champion Franchon Crews-Dezurn, along with George Kambosos, held a unique distinction as the only manager in boxing history to have a male and female undisputed champion.

Bill Haney jokes that he had called Kahn a million times to get the Kambosos fight done.

“Peter is a good guy and me and Peter were the ones that made the fight happen,” Bill said. “The fight wouldn’t have happened if not for Peter. It’s why I told Kambosos that he better appreciate Peter. We’re going back to Australia to defend the world championship. Peter made sure that (stipulation) was made for the rematch. Team Haney has a great relationship with Peter. We didn’t want to leave Eddie Hearn and Matchroom. Eddie had been very good to us. But that fight wouldn’t not have happened if Peter didn’t let politics and the b—t get in the way.

“Peter directs people behind the scenes to make things happen. He’s a masterful puppet master, and I mean that in a good way. Peter is not only a good man, he’s a smart man. He never let the emotions of the fighters take everything over. The business of boxing can be like a street fight. You have to win the business behind the scenes. That’s what he did.”

Jeremy Koegel, Top Rank’s general counsel, likes dealing with Kahn, based on his problem-solving ability. Koegel goes back with Kahn for about three years now.

“I know Peter through working with him and some of guys form Top Rank and what I learned about him is that he’s very easy to work with,” Koegel said. “With Xander, I know he’s looking at the long view and Top Rank, we all work on the same page together. Peter makes sure his fighters are taken care of, and he’s willing to listen to the points you make when there is a disagreement. He’s solution-oriented, which always makes problem-solving easier.”

“That’s because Peter is relentless; I don’t know when he finds time to sleep,” Smith said. “He’s always pushing to get stuff done and always moving to get stuff moving forward. He’s always on the phone. He’s constantly in touch with everyone he needs to be in touch with on behalf of his clients. He’s had a great year. Look what he’s done with Franchon and Kambosos. It takes a special skill to negotiate and be liked by everyone across the table from you. Look at the Kambosos-Haney fight, it takes a special ability to walk that tightrope of having the opposing side like you.”