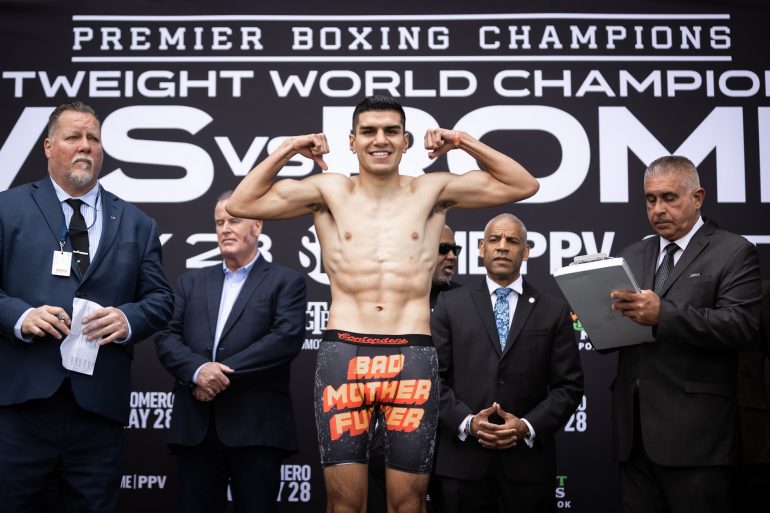 Photo by Amanda Westcott/Showtime
27
May
by Francisco Salazar

Jesus Ramos admits he has added motivation going into his fight against Luke Santamaria. Watching his uncle lose a decision to the same fighter will do that.

Ramos has business to take care of tonight, and is confident a solid win over Santamaria will bring about higher-profile fights.

The 10-round bout will take place at the Barclays Center in Brooklyn, New York and will take place on the undercard of the Showtime Boxing Pay-Per-View telecast (9 p.m. ET/ 6 p.m. PT), which will be headlined by the lightweight clash between Gervonta Davis and Rolando Romero.

Ramos (18-0, 15 KOs), who resides in Casa Grande, Arizona, last fought on February 5, stopping gatekeeper Vladimir Hernandez in the sixth round. Also fighting on that card was his uncle, fringe contender Abel Ramos, who faced Santamaria and lost a disputed unanimous decision in a fight many thought Abel Ramos did enough to win.

The 21-year-old was disappointed with the outcome, but admits he is not going to lose focus or the task at hand when he steps inside the ring with Santamaria.

“I do have that added motivation, but I don’t have any resentment whatsoever,” Ramos told The Ring Thursday afternoon. “I don’t have any anger either. I thought my uncle Abel won but the judges gave (Santamaria) a gift.

“I have the same motivation and concentration that I would have for any fight. I’m soaking in the environment of fighting on a pay-per-view in New York City. I’m enjoying it.”

Ramos has fought most of his fights at 147 pounds, where he would mostly break down opponents and earn stoppage wins or notch devastating knockout wins, including the vicious knockout win over Rickey Edwards in September 2019. Ramos also has wins over Javier Molina, Ramal Amanov and previously-unbeaten Esteban Garcia.

He would make his junior middleweight debut against Brian Mendoza on September 5, winning by unanimous decision.

While some boxing insiders wondered whether Ramos would be able to carry his power to a new weight class, he did so with the knockout win over Hernandez. Ramos admits fighting at 154 pounds does not strain his body so much, especially when making weight.

“Fighting at 154 pounds alleviates the pressure,” said Ramos, who made his pro debut at the age of 17. “I had to really work hard to make 147 pounds. At 154, I’m a lot stronger and a lot better. Everything. I carry my power well, especially when breaking down my opponents. I feel great at this weight.”

Ramos is fighting in a talent-rich division. Two weeks ago, Ring Magazine junior middleweight champion Jermell Charlo was crowned the undisputed champion after knocking out Brian Castano. While he is not there yet as a contender, he is still a solid prospect, along with Charles Conwell, Israil Madrimov, Souleymane Cissokho, and Yoelvis Gomez.

As he has demonstrated his pedigree in beating modest opposition, Ramos already believes he is a contender.

“In my opinion, even with a big win on Saturday, I believe I would be a contender,” said Ramos. “I believe I should be classified as a contender. I may be young, but I’m not rushing to face the top, top guys yet. I’m just looking to perform and be at my best.”

A solid win tonight would bring Ramos fights on a bigger platforms, possibly against other top prospects or B-level contenders at 154 pounds.

Whatever challenge is in front of him, Ramos hopes to make a statement.

“Nothing is given to me. I’m never satisfied. I do want to make a statement (against Santamaria). If the knockout is there, I’ll take advantage of it. I’ll break him down and let the knockout come.”