Franchon Crews-Dezurn completes a long journey to the top 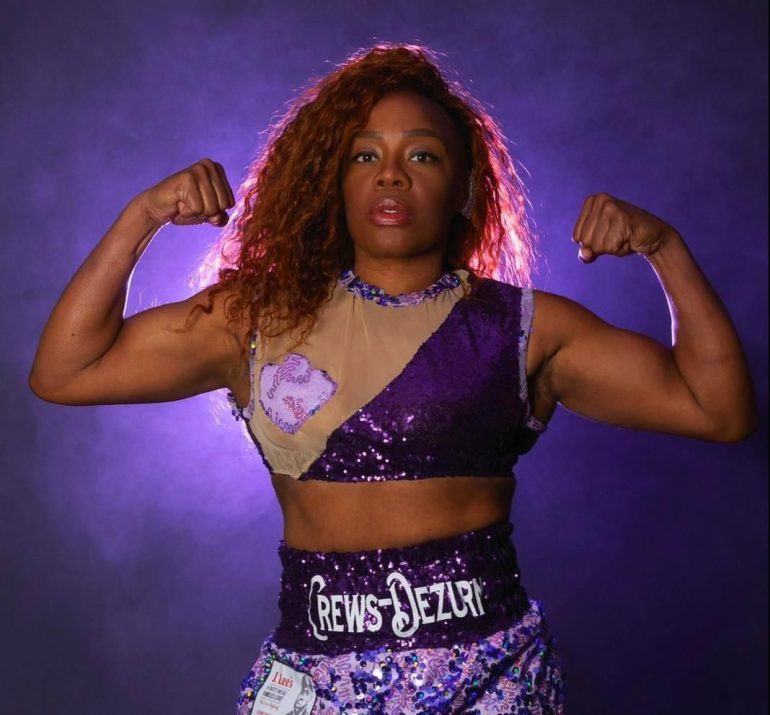 06
May
by Joseph Santoliquito

Mother’s Day was approaching. Franchon Crews-Dezurn was very aware of it, still in New York City on Tuesday, May 3, basking in the glow three days after her new achievement as the first woman in boxing history to become the first undisputed super middleweight and Ring Magazine world champion.

What Crews-Dezurn really yearned for was to cradle the urn of her late mother, Sarah Marie Crews, who overcame cancer twice before succumbing to complications from a chronic kidney disease. Crews-Dezurn could tell Sarah Marie about a story she was aware of, how she worked three jobs, toiled in places while dreaming of bigger things, and how a mother’s strength continues to translate in the ring.

As long as Crews-Dezurn keeps fighting, Sarah Marie keeps living and breathing through her daughter.

Crews-Dezurn (8-1, 2 knockouts) likens herself to the black Phoenix, raising from the ashes herself to become a 168-pound world champion, proud owner of The Ring’s first-ever super middleweight championship, along with the WBC/WBO/IBF/WBA titles, after dominating Elin Cederroos (8-1, 4 KOs) on the Katie Taylor-Amanda Serrano undercard before a sellout crowd of 19,187 at Madison Square Garden last Saturday.

And she did it her way—using orchestrated chaos.

“I’ve been through a lot of stuff in my life, working three jobs while getting my college degree and taking care of a sick mother, and I watched my mother die, she was the apple of my eye,” Crews-Dezurn said. “My mother was able to see me turn pro against Claressa Shields (a four-round decision loss) and two weeks later she passed away. I was there. I saw her take her last breath. I fought Claressa straight off the coach, on two-week’s notice. On December 7, 2016, my mother passed away.

“My mother was one of my biggest inspirations. She fought years to live. She had a brain aneurism and she never cried and never complained. I wish she was there to see me Saturday night.”

Crews-Dezurn, 34, says she can be a technical boxer, when she has to be. Otherwise, she’s a tornado. If you’re in a dangerous back alley, you would want the crudely effective Crews-Dezurn with you.

“Whatever I need to be, I am, I become water,” Crews-Dezurn said. “I can be technical, but why be technical with someone who was as technical as (Cederroos)? Look back as some of the technical things I was able to do in previous fights. I know what I’m doing. When it calls for it, I can brawl. I like to use orchestrated chaos. I didn’t even use my full arsenal. I’ve been around a long time. I was a street fighter before anything.

“I do have technical skills. I can box. If I didn’t know what I was doing, I wouldn’t have been able to slow the fight down and pot shot (Cederroos) in the seventh and eighth rounds. I know what I’m doing. It’s just not orthodox. Winning this title means everything to me. It hasn’t settled in yet. For me, I always saw myself as a world champion and I felt I was destined for something great.” 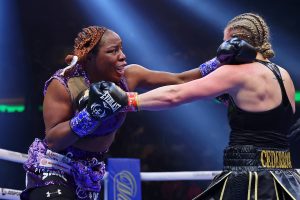 Crews-Dezurn, who possesses a college degree in small business management and entrepreneurship from DeVry University, has always had a chip on her shoulders. That comes from being denied opportunities other successful amateurs—male and female—received.

“If you look at when it was announced that I won, I let out a scream, because I did it,” said Crews-Dezurn, who was a waitress at Cheesecake Factory, a barista at Holiday Inn and worked at the University of Maryland gym to have money for tournaments. “I did everything for a reason then. I was a waitress, because I was good with people. The Holiday Inn gave me discount hotel benefits when I traveled to tournament and the gym gave me a place to work out.”

Glenn Dezurn Jr., who has been married to Franchon since 2012, has played a vital role in her success as has manager Peter Kahn, who the Dezurns discovered a few years ago through a story about Kahn on RingTV.com.

“First of all, Franchon is genuine, one of the most genuine people I’ve come across,” said Kahn, who made a little of his own last Saturday as the first manager in boxing history to have undisputed male (lightweight world champion George Kambosos) and female world champions (Crews-Dezurn). “Her will to win and her mindset is where her success lives. She also has a great support system with her husband Glenn and her coach, Barry Hunter, and her work ethic. Her desire to be successful and the mantra for this training camp was no Plan B. Literally walking out for the fight, I was walking out behind her, and you heard, ‘No Plan B.’

“There was no option than to win this fight, becoming the first undisputed super middleweight champion and first Ring Magazine champion. Franchon has the pedigree and amateur background. To win that fight, she had to be the boss from the opening minute of that fight and she chopped Cederroos like a tree. Franchon has such an understanding of range.” 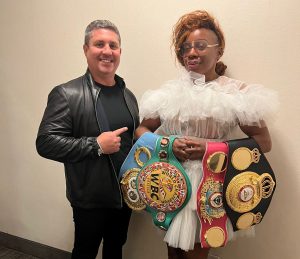 Kahn said Crews-Dezurn will fight one more time before the end of the year, though Team Crews-Dezurn has to be aware of the sanctioning body mandatory challenges involved. Kahn put it out there that if the Claressa Shields-Savannah Marshall middleweight title fight does not work out this summer, Crews-Dezurn would be available to fight either of them.

Crews-Dezurn had a chance to enjoy her moment on Saturday night, and many of the women legends came back to congratulate her, including Shields, who cheered Crews-Dezurn on at ringside.

“My family was there afterward and Peter threw a pizza party for me,” Crews-Dezurn said. “When I get back home, I can hold my mom in my arms. I don’t stop. It’s how I fight. I don’t stop. I’ll push myself through a situation. My mom wasn’t there on Saturday night, but I knew she was there watching. I could feel her.”