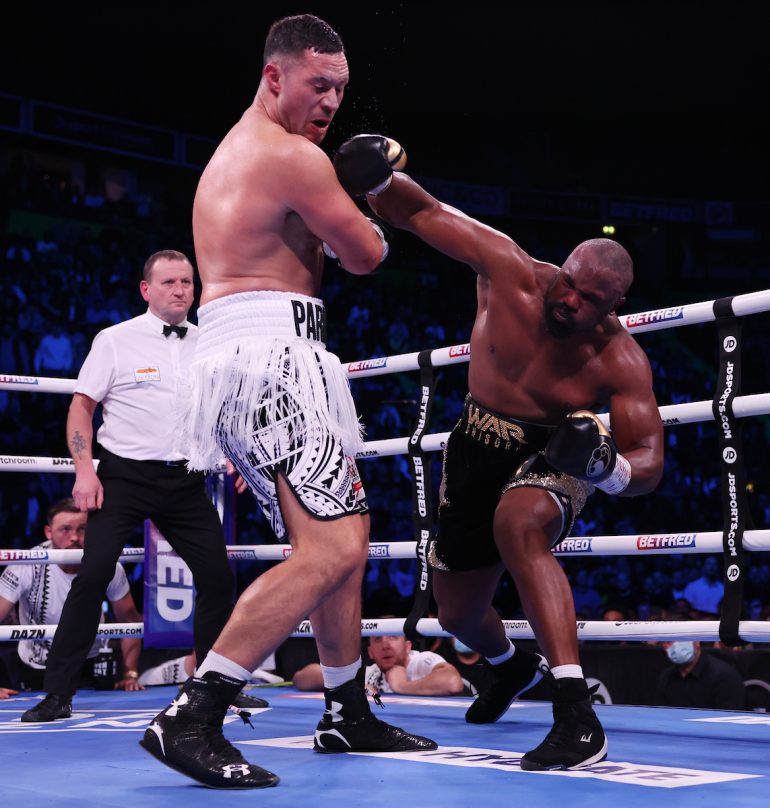 Chisora had his moments during the slugfest with Parker. Picture By Mark Robinson Matchroom Boxing
20
Dec
by Tris Dixon

One can only salute Dereck Chisora for the heart and bravery he showed against Joseph Parker in Manchester last weekend.

For many onlookers, they felt he was ‘too brave’ and that, after 44 fights in the 37-year-old’s hard career, he’s taken more than enough punishment.

Not so Chisora, who tweeted immediately after the contest, “F*** retirement. I’ll be back in the summer b****.”

Chisora wasn’t just a warrior in taking his licks on Saturday but every time he seemed almost out of the fight he planted his feet and fought valiantly back.

It was awe-inspiring and the fans in attendance certainly got their monies worth but I know I’m not the only one who felt a little squeamish watching Chisora’s exhibition in balls and boldness.

You can’t help but admire his courage, but anyone who didn’t sense at least a tinge of guilt isn’t aware of the long-term dangers boxers face from such abuse. The Parker rematch was not a stand-alone event. Hundreds upon hundreds of bombs have been detonated on Chisora’s head over the last two decades as an amateur and professional. More often than not, he hasn’t flinched, but his brain would have shifted and been traumatised on multiple occasions.

One can only predict how many concussions he’s had, fought through and boxed with.

There’s a fair chance he boxed a vast majority of the Parker rematch through a concussive fog from one of the early long rights he was lanced by or one of the right uppercuts he dipped in to.

But at what point in the fight was enough, if at any point?

The scorecards would tell us that if it wasn’t for the knockdowns then Chisora’s pressure would have won him the fight.

Even in rounds when he seemed to be in the most trouble, he finished by sometimes almost turning the tables in his typically defiant way.

The debate often comes whether it is down to the corner, referee or a doctor to call it off but if someone is still in the fight, and technically Chisora was – even though many thought he was well adrift – should they always be given the opportunity to make it to the final bell?

It is one thing to be given the opportunity to hear the sound of the bell for the last time, another thing entirely to grant a fighter the wish of ‘going out on their shield.’

There were clearly times when referee Howard Foster thought about intervening, but he gave Chisora every benefit of the doubt, as will those who want to see him box on.

And who is to tell Dereck to stop? Why should a fighter, who can still beat operators at world level, or at the very least fringe world level, pack it in when there are hundreds below him in the pecking order?

If Eddie Hearn chose not to promote him on ethical grounds, some chancer somewhere would capitalise on Chisora’s heart, name and popularity and pitch him in to a big fight.

And if the British Boxing Board of Control chose not to license him, someone would somewhere else. And how can you not license him, when he’d beat most of the fighters in the British ratings, provided there are no changes to his medical checks and brain scans?

Of course, what brain scans don’t show is CTE (chronic traumatic encephalopathy), which is present in the form of microscopic tau protein but that can only be seen on samples of brain tissue during autopsy.

That is the only true indicator of damage, but by the time it can be detected it doesn’t matter. It’s too late.

There are other indicators that could be used, like an increased gap between the ventricles in the cavum septum pellucidum (something very common in boxers) although those are estimates rather than facts – at this stage.

But there are wheels turning when it comes to changes in boxing, or at the very least appreciating the sacrifice fighters like Chisora make.

During the contest, one of the sport’s top boxing scribes messaged me in what many perceived as a thrilling fight and said, “I hate it.”

The morning after, a leading broadcaster messaged me saying, “I fear for Dereck.”

And former fighter Tony Jeffries, an advocate for brain health in boxing who is part of ongoing studies following his own boxing career tweeted, “A 37-year-old should not be allowed to take that much punishment, not for any amount of money or for anyone’s entertainment. That should be Chisora’s last fight. He’s had a great career. Fun fact: We both won the Senior ABAs in the same year back in 2005.”

A scroll through pictures on social media in the aftermath of the bout saw a mixed bag of comments, from those highly entertained by the war to those concerned about Chisora’s long-term health.

In a more recent tweet, Chisora said, “I’m not done yet.” And he surely isn’t.

But he’s at a risky stage in his career. As promoter Eddie Hearn said, Chisora took the metaphorical “kitchen sink” from Parker but many of the sport’s most indestructible fighters began to crumble at some stage later in their careers, some earlier than others, once the mileage got too high. They suffered later on, too.

Chisora is 32-12. Three of his losses came via stoppage but there have been plenty of hard bouts and there’s been a lot of punishment.

There’s something about the buzz of the crowd, the recognition of being a warrior and the thrill of digging deep in a brutal war that Chisora will never be able to replace but he has a lifetime after boxing to live, too. It’s alright to admire his courage, but it’s always important to remember the cost and respecting the sacrifice.