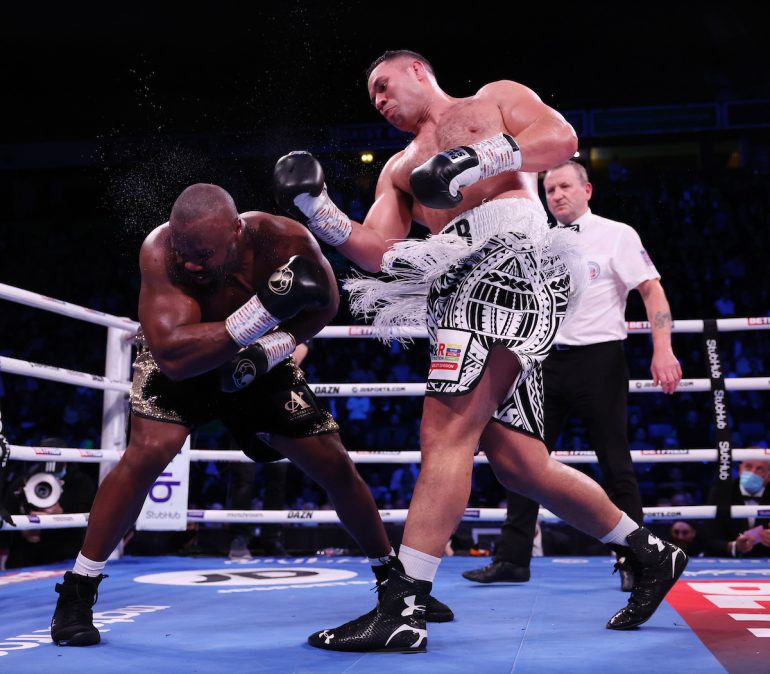 Joseph Parker handed Dereck Chisora the 12th loss of his career, the third in a row and the second to Parker this year in a war at the Manchester Arena.

The New Zealander won by margins of 115-110, 115-111 and 114-112 but Parker was a worthy winner, dropping Chisora three times and inflicting real punishment on the veteran former European champion through all 12 rounds. 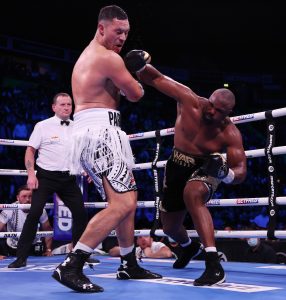 Chisora had his moments during the slugfest with Parker.
Picture By Mark Robinson Matchroom Boxing

“He was one tough guy,” admitted Parker, a former WBO beltholder who moved to 30-2. “He never stopped coming to the end. He’s a credit to the sport of boxing.”

Parker was busier in the first round of the contest at an electric Manchester Arena.

Trainer Andy Lee was satisfied with Parker’s work in that opening round. “You hurt him twice,” said Lee.

But Chisora was far more aggressive in the second. He was bobbing and weaving and crowding Parker but as the round wore on, Parker picked some strong right hands that had the Finchley man’s legs dipping and had him in trouble towards the end of the session.

Chisora was in more trouble in the third and nearly unravelled from several shots that came his way after Parker picked an impressive lead uppercut.

Dereck had moments of success as the round neared its end, bombing forward and firing in his trademark hooks up and downstairs.

With a minute to go in the fourth, Parker landed a crisp uppercut and Chisora was in desperate trouble. He tried to hold but Parker tossed him into the ropes where Dereck was given a count by referee Howard Foster.

But Chisora had a better fifth and certainly there were no moments of crisis for him although Parker was scoring well with the right again in the sixth.

The New Zealander was boxing marvelously but in the next both would find themselves in the trenches. Parker selected a wonderful right uppercut to drop Chisora early in the round and just when you thought the veteran was running out of gas and ideas he flew into Parker, throwing leather with both hands and nearly turning the tables at the bell in a thrilling round. 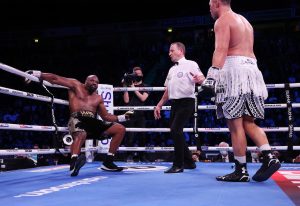 Chisora was rocked into the ropes numerous times, sometimes close to having the bout waved off, but he survived. Picture By Mark Robinson Matchroom Boxing

Chisora was given another count in the eighth when he took an uppercut and was thrown into the ropes once more, referee Foster ruled the strands had kept Chisora up – and they had.

In the ninth, Foster appeared to be close to stopping it. Parker was picking right hands expertly but Chisora was doing just enough in spurts to stay in it. Parker had the upper hand in rounds 11 and 12 but Chisora was game, competitive and courageous right the way through. Ultimately, however, he had been well beaten
Parker had won their first fight behind closed doors by split decision in May. This fight had fans and they played their part. Chisora is now 32-12 and the mileage is high.

In the co-feature, Frenchman Kevin Sadjo impressively won the vacant European light-heavyweight title with a sixth-round win over Jack Cullen.

The tall and rangy Cullen, from Lancashire, was cut over the eye in the second round and hit the deck from a left hook to the body in round six before the contest was stopped at the 1:11 mark. Cullen falls to 20-3-1 while the victor improves to 17-0, with 15 stoppages. 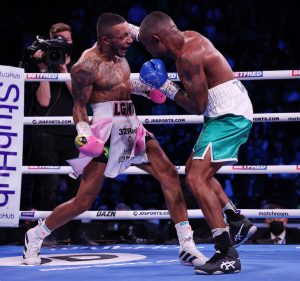 Zelfa Barrett and Bruno Tarimo battle it out during their final eliminator for the IBF 130-pound title. Picture By Mark Robinson Matchroom Boxing

Zelfa Barrett won an eliminator for the IBF junior lightweight title with a convincing win over Australia-based Tanzanian Bruno Tarimo. The African was floored by a left hook in the third and Barrett landed some classy shots throughout, winning by margins of 117-110 (twice) and 116-111. Manchester’s Barrett is now 27-1 (16).

Boston-based Ecuadorian Carlos Gongora lost for the first time in 21 fights after being defeated by Lerrone Richards narrowly over 12 rounds. Richards, who is coached by Dave Coldwell, is now 15-0 and he won 115-113 on two scorecards while one judge favoured Gongora 116-112.

Exciting Croat heavyweight contender Alen Babic came through a torrid round two, in which he was nearly stopped, but he maintained his unbeaten record with a sixth-round victory over Frenchman David Spilmont, who was down in the fourth and sixth sessions. Babic has plenty of flaws but brings entertainment every time. He’s now 10-0 with 10 stoppages while Spilmont drops to 11-8-1.