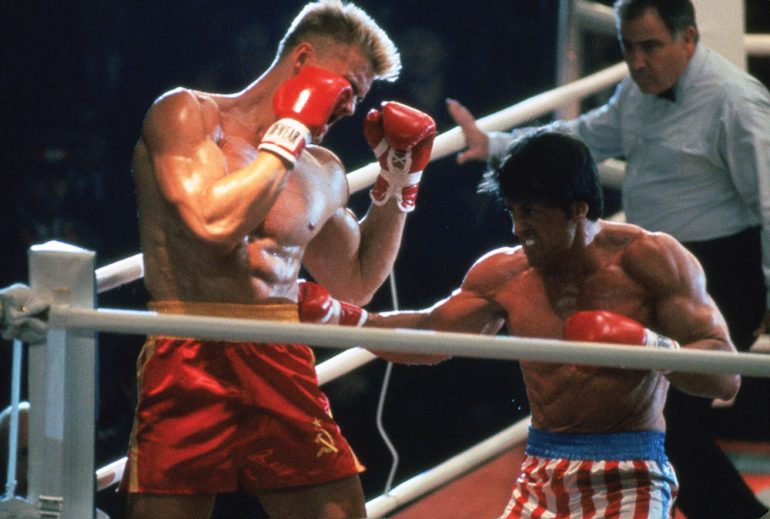 It was mid-2020, America and much of the rest of the world in the full grip of the COVID-19 pandemic, when Sylvester Stallone again came to the realization that there cannot really be too much of a good thing if that good thing is an evergreen cinematic franchise that can endure the scripted deaths of beloved characters, a severe economic downturn spurred by a global health crisis, and directorial miscalculations on his part that the public nonetheless chose to overlook.

When in doubt, Sly, then 74, instinctively knew that his most prudent course of action during one of his periodic career dry spells was to go one more round with his most entrenched fictional creation, Rocky Balboa, forever-reigning champion of the box office and moviegoers’ affection.

Thursday night in Philadelphia, Rocky made another comeback of sorts to the sort of spontaneous cheers from a hometown audience that 45 years ago first fell in love with a down-on-his-luck fighter who wanted to prove to others, but mostly himself, that he “wasn’t just another bum from the neighborhood.”

No, Sly, now 75 and in the diamond anniversary year of his earthly existence, did not bring Rocky back to lace up the gloves one more time for a go at the geriatric heavyweight championship. In a Q-and-A session with Ben Mankiewicz prior to a private screening of the recut Rocky IV: Rocky vs. Drago at the Philadelphia Film Center, he acknowledged that he stretched the bounds of believability in 2006’s Rocky Balboa, when a 60-year-old Balboa slugged it out with the then-heavyweight champion of the world and almost won. But if Stallone’s history has demonstrated anything, it is that it is almost impossible to kill off Rocky as he unwisely had done with great rival and greater friend Apollo Creed, crusty trainer Mickey and devoted wife Adrian. 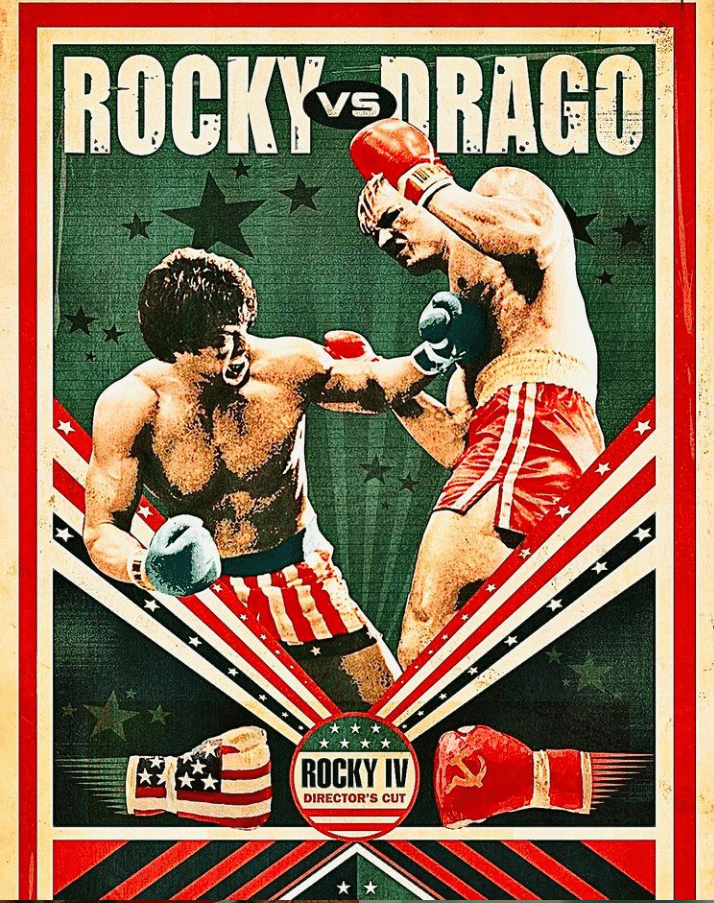 Rocky IV: Rocky vs. Drago is available to the public beginning today via the Amazon streaming service, and if the reimagined film – minus brother-in-law Paulie’s robot but with additional scenes involving Apollo (Carl Weathers), Adrian (Talia Shire), Ivan Drago (Dolph Lundgren), trainer Tony (Tony Burton) and Drago’s nasty Russian overseer Nikoli (Michael Pataki) – pumps renewed life into a series that has stretched from the 1976 Academy Award-winning original to eight films (including the two Creed spinoffs), a prequel television series might be next.

Hey, if prequels worked for the Star Wars franchise (well, maybe not so much for recent theatrical release The Many Saints of Newark, which sent future mob boss Tony Soprano back to his North Jersey adolesence), why not Rocky? He told Mankiewicz that taking familiar characters back to the turbulent 1960s, when Rocky was 16 and Adrian 15, opened a new (old) world of possibilities.

“You had Vietnam,” Stallone said. “You had Bob Dylan music, the Beatles. It was just a crazy time. To go back into the past when the music was different, the look was different … my gut feeling is that it’d work. It’d be something like American Graffiti. (Rocky) could meet the Apollo Creed who’s 18 years old and coming to town for the Golden Gloves.”

The by-invitation audience whooped and hollered when Stallone, now gray-haired but still looking fit enough to slip into Rocky mode as easily as he might tug on a favorite sweater, strode onto the stage. At various points during the showing of a modified, 36-year-old movie the audience erupted into spontaneous applause, even if some of the scenes were as familiar to locals as the Mummer’s Parade and their favorite cheesesteak joints. And so what if the previous version of Rocky IV, the one star-director-screenwriter Stallone now says wasn’t all that it should have been, has a 92% approval rating from Rotten Tomatoes, compared to just 40% for the reconfigured update, although much more public feedback will soon be forthcoming. Rocky never does well in the early rounds, his stock in trade in being the furious late comeback. And so it might be again.

Stallone was working on a non-Rocky project in 2020 when the pandemic pulled the plug on the production and left him pondering his next move. Then it occurred to him that, well, maybe the time was right to go back to the future.

“I thought, `Hmmm, what am I going to do with myself,’” he told Mankewicz. “Writing is really challenging. I started to write something and then I thought, `Why don’t I recut a film?’ Rocky IV was the most popular (film in the series, in terms of gross receipts). I thought that would be the easiest one to get past MGM so they wouldn’t say it might be a black hole of a money pit. But more importantly, I knew that film was flawed, in a way. I was very taken by the times. Star-filtered, smoke, backlit … it was a very ’80s film, very MTV-ish, a lot of montage. And then there was the robot. I went to a pizza parlor and a robot started talking to me. I said, `This has got to be in the movie.’”

Asked what had happened to brother-in-law Paulie’s birthday-present robot (Burt Young also was present at Thursday’s re-premiere), Stallone said, “You can find it in a local trash compactor,” eliciting squeals of laughter from those in attendance.

What Stallone aimed for in the do-over was to emotionally “flesh out” characters who he now says had been underserved in the original. “I opted for speed, for expediency,” he said of his vision for what his film should be in 1985. “I didn’t want the audience to get bored, so I jumped ahead a lot. But then I thought, `These little moments (added from unused footage) make the big moments. The fine strokes on a painting make the masterpiece, not the big strokes.”

From a purely financial standpoint, Rocky IV was a monster hit, with a domestic gross of $127,873,716 ($328,703, 189 in 2021 dollars), fourth-highest for that year, trailing only Back to the Future, Beverly Hills Cop (Stallone turned down Eddie Murphy’s lead role) and Sly’s other profit-drenched franchise character in Rambo: First Blood Part II.

It would not be quite fair that Stallone’s emergence as a superstar of the silver screen owes entirely to the Rocky and Rambo flicks, but they were, are and possibly forever will continue to be the gifts that keep on giving to him. In an interview I did with Sly in 2006, the year Rocky Balboa (which he now claims is his personal favorite in the series) came out, he expressed amazement that the character had taken off as it did and had never slackened in popularity.

“I’ll just go on making Rambo and Rocky,” he told me. “Both are money-making machines that can’t be switched off. You know, I’m amazed by all of this. At one time I thought people would get over (their fascination with the Rocky character) and move on. Didn’t happen. After 30 years, Rocky has taken hold to a degree I never could have imagined.”

Fifteen additional years have tolled by, and Stallone still wonders how and why fortune has so favored him in the way that it did in the form of Rocky Balboa and, to a somewhat lesser extent, John Rambo.

“It is exhilarating,” he told Mankewicz. “It’s baffling because I don’t know how it happened. It was a very, very simple story about a simple man. It manifested itself in amazing ways.” 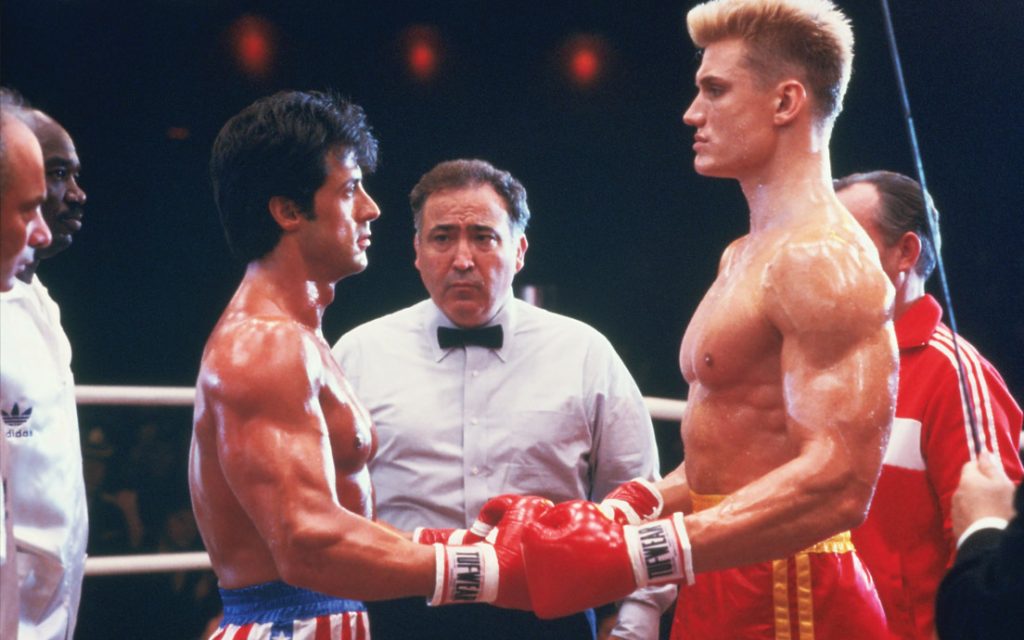 Did it ever. As a struggling young actor, Stallone had written the screenplay and appeared in 1974’s The Lords of Flatbush, a tale of 1950s teenage tough guys. But a year later, he had only $106 in his bank account and was sleeping in New York’s Port Authority bus station. But he had written a script he thought was promising, and he pitched it to studio executives, a couple of whom more or less agreed. Except that the suits had another vision for the premise, namely to change Rocky from an Italian-America fighter in Philly to an Irish-American one (Ricky, maybe?) in Boston, with Ryan O’Neal envisioned in the lead role.

Offered $360,000 for the rights to his story, Stallone – who had earned all of $1,300 that year, total – was tempted to grab more cash than he ever imagined could be his. In the end, however, he held firm and said no. He was insistent on playing the lead, Philadelphia (where his family had moved in the early 1960s) had to remain the setting and … well, of such things are miracles sometimes made.

“I went home and said, `You know, this is a crossroad,’” Stallone recalled. “There’s a few of them you have in your life. I know I’m going to hate myself if I don’t go all-in. Because I have nothing to lose. I was living well below the poverty line. But I thought, this is it. Every character I played was always the thug, the thug, the thug. I said, `Why don’t I write a story about a thug who’s not a thug. It’s at least in the same ballpark. So I just risked it. This was a gut feeling.

“I really believe the brain can get you into trouble sometimes. (My) initial instinct was, I wrote it myself, I want to do it, if I don’t and someone else does it and it turns out halfway decent, you’re going to hate yourself. You’re going to be a bitter man, then a bitter old man. So at least try. If you fail, you fail. But at least you had the opportunity, which is what the whole Rocky thing is based on.”

It hasn’t hurt, of course, that so much of what Rocky IV was in 1985 hinted at what was to come in boxing, and the world at large. Performance-enhancing drugs. The emergence of Eastern Europeans as a dominant force in the sport (in 2006, fighters from former Soviet republics then held three of the four most widely recognized heavyweight titles: Ukraine’s Wladimir Klitschko [IBF], Russia’s Nicolay Valuev [WBA] and Belarus’ Sergei Liakhovich [WBO]).

One can only wonder if the first Rocky, which won three Academy Awards, including the big one for Best Picture, would have turned out had not every little thing fallen just so. The casting was perfect, or as close as it ever gets in Hollywood, but what had Stallone’s initial vision for Adrian was – gulp – Bette Middler? He’d been turned down not only by the Divine Miss M, but by three other actresses until Talia Shire showed up to audition literally at the last minute. Same thing with Carl Weathers as Apollo.

“Literally jump shots at the buzzer,” is how Stallone described his incredible good fortune with co-stars. Except, maybe, for Paulie’s robot.