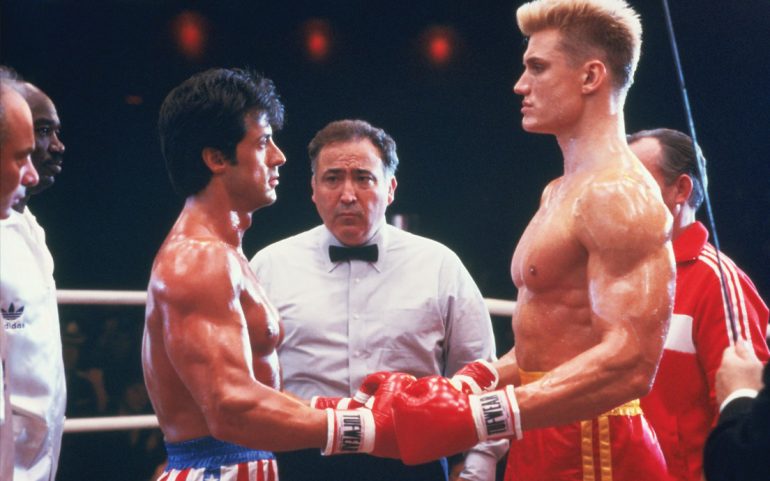 Note: This feature originally appeared in the December 2021 issue of The Ring.

MORE THAN 35 YEARS AFTER ITS ORIGINAL RELEASE, THE MOST SUCCESSFUL MOVIE IN THE ROCKY FRANCHISE HAS BEEN GIVEN A COMPLETE MAKEOVER BY ITS CREATOR

“Whatever he hits, he destroys!”

Legendary Hollywood superstar and filmmaker Sylvester Stallone will be hoping that this quote doesn’t apply to his latest brainchild: an all-new and remastered version of the fourth installment from the Rocky series. Special first-look screenings of Rocky IV: Rocky vs. Drago – The Ultimate Director’s Cut are scheduled for November 11 and the movie will be available on demand from November 12.

What can fans expect? After falling short in securing an interview with Stallone himself, I was advised to reach out to MGM Studios, which kindly supplied a working synopsis. This new version of the 1985 blockbuster will feature over 40 minutes of never-before-seen footage, which is substantial given that the original release ran just 91 minutes total.

Over the past several months, Stallone, 75, has teased fans on Instagram with unseen fight choreography featuring himself, Carl Weathers (Apollo Creed) and Dolph Lundgren (Ivan Drago). The long-lost sequence where a boxing commission refuses to sanction the Balboa-Drago showdown following Creed’s demise – a clip of which is included in the original trailer – has also been rediscovered. Oh, and Paulie’s (Burt Young’s) robot is being KO’d from the entire movie, with its inventor recently stating that this particular maneuver is royalty-related. Other changes have yet to be announced.

But why has Rocky IV been selected for a redux? Why does this particular sequel resonate so much with fans of the series and its creator?

In early 1986, as a 10-year-old, I attended a showing of the movie at the now-demolished Hamilton Odeon cinema in the West of Scotland with a family friend. I wasn’t a boxing fan then. In fact, I barely qualified as a Rocky fan, having only seen the first two movies while inexplicably ignoring part three (later to emerge as my favorite).

There was a stark difference between the first two installments and Rocky IV. The Oscar-winning original and its first sequel shared an identical cinematic tapestry, with both movies taking place almost exclusively in Philadelphia. However, this movie was beyond bombastic, with neon-filled Las Vegas and the then-Soviet Union (OK, the snowy mountaintop scenes were shot in Wyoming) serving as locales for propaganda-loaded power punches. This was during the time of the Cold War, and if England’s James Bond could beat the Russians, so too could the all-American Rocky. Stallone viewed his character as “an international ambassador.”

Did the narrative work? 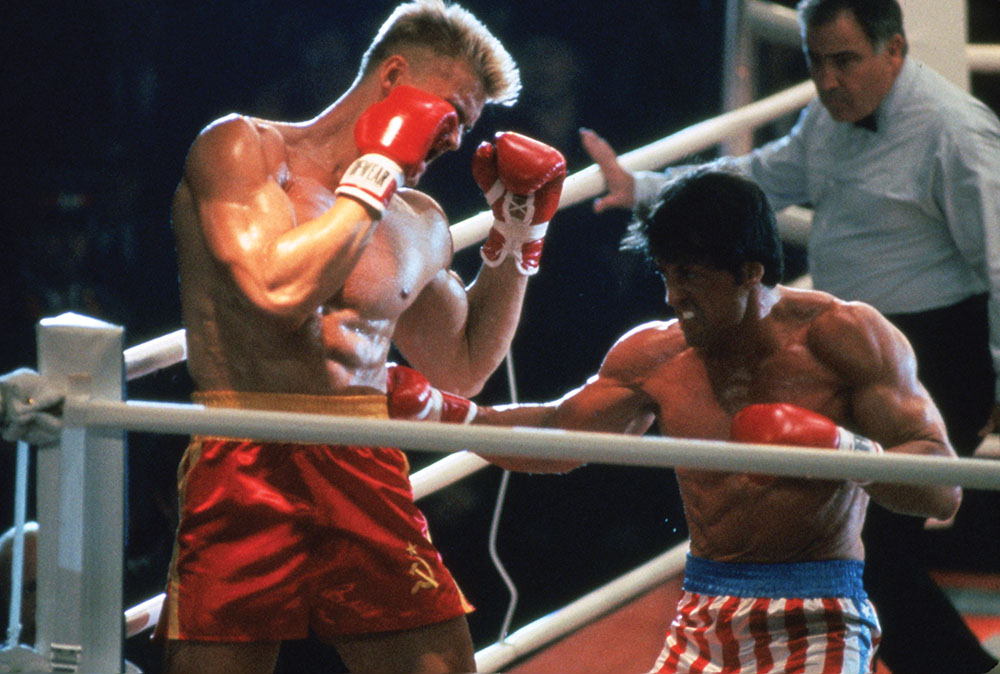 Fans will get to see more of the iconic Rocky vs. Drago finale.

By the end of that movie, over 100 people inside the cinema I was attending – adults and children – were on their feet, chanting the name of a fictitious character who they knew was going to win before they’d bought their popcorn. Possessed with a finely tuned cringe detector, even at that age, I didn’t join in with the chaos, but it’s a moment from my childhood that I’ll never forget. It was the most visceral reaction I’ve ever seen from a cinema audience, and Rocky fever was maintained for months afterward. Why? In the mid-1980s, there was no Netflix, no Amazon Prime … hell, there was no cable TV, and there were only four – yes, four – U.K. terrestrial channels. These were not the throwaway days of the millennial generation. No, the only way you were seeing Rocky IV again was to wait six months for it to be released as a rental (VHS or Betamax videotape, not DVD or Blu-ray). You cannot overstate the sense of anticipation that schoolkids had while waiting for that movie to be released on home video, and many of us rented it every other week until the quality looked as beaten up as Rocky did post-fight.

And if you were a Rocky IV superfreak, then the soundtrack – paradoxically timeless despite its unapologetic ’80s vibe – came hand in hand. In what is perhaps the most popular workout soundtrack ever, Survivor’s 1982 hit “Eye of the Tiger,” originally written for Rocky III, was reprised in the movie’s opening; James Brown’s unforgettable single “Living in America” was used for the patriotic Creed’s swanky ring entrance; “No Easy Way Out,” written by Robert Tepper, accompanied Rocky’s trip down memory lane in a black Lamborghini Jalpa; “Burning Heart,” again by Survivor, was used for Rocky’s voyage  to the U.S.S.R. and John Cafferty’s “Hearts on Fire” played over the final training montage.

The training scenes are perhaps the most memorable parts of Rocky IV. The juxtaposition between Rocky’s old-school approach – log carrying, horse carriage lifting, dogsled bear crawls – and Drago’s high-tech, state-of-the-art training facility was a work of genius for its time. Drago runs on a treadmill? Rocky runs up a mountain. Drago chops down sparring partners? “The Italian Stallion” chops down trees. Hopefully, Stallone won’t have tampered with these sequences, because fans of the series are likely to be protective. 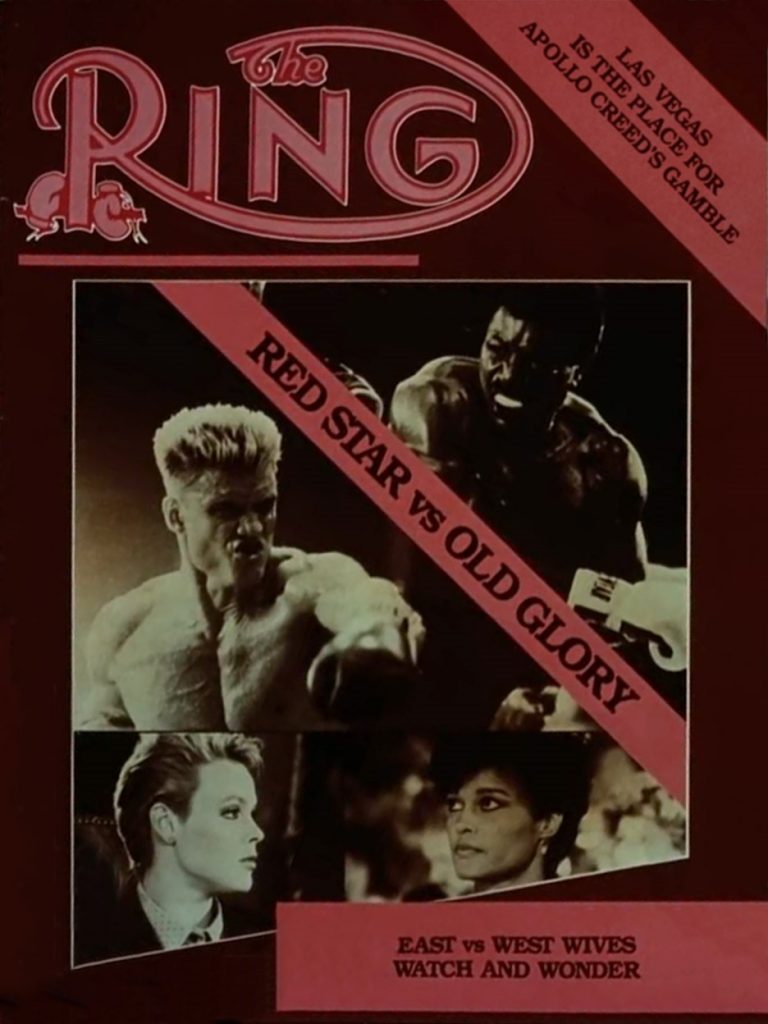 Rocky IV also predicted the future of boxing in a variety of ways. The use of performance-enhancing drugs in sports didn’t enter the public conscience until Canadian sprinter Ben Johnson tested positive for an anabolic steroid (stanozolol) following his infamous 100-meter win at the 1988 Olympic finals in Seoul. In boxing, PED use was all but unheard of when the fictional Drago took the needle, but over 35 years later it’s perhaps the most damaging specter hovering over the sport.

On a more innocent note, Apollo’s ring entrance looked over the top in 1985, but that kind of campy showmanship was almost expected by the time Tyson Fury mimicked the scene in his Las Vegas debut almost 35 years later. The legacy of Rocky IV was front and center in Fury’s tribute and probably inspired such ring extroverts as Hector Camacho and Prince Naseem Hamed in prior decades.

The movie also foreshadowed the emergence of the modern-day heavyweight and a long period of Eastern European domination. In the mid-1980s, the heavyweight landscape was exclusively dominated by African Americans who weighed roughly 220 pounds – think Larry Holmes and Mike Tyson. A decade later, heavyweights were much taller and weighed approximately 250 pounds (Drago was 261). When British great Lennox Lewis retired in 2004, Vitali and Wladimir Klitschko, brothers who hailed from the former Soviet Union, flew the flag for Ukraine and dominated the heavyweight ranks. Both were considerably more personable than Drago but pulverized opponents for over a decade, and playful impressions of them were almost sure to include the line “I must break you.”

So, will this new version of Rocky IV be a success? While Stallone can bomb when attempting to sing with Dolly Parton in Rhinestone or flop when he’s trying to be funny alongside Estelle Getty in Stop! Or My Mom Will Shoot, he frequently knocks it out of the park when it comes to the action genre. Unlike his untimely attempt at regurgitating John Rambo for yet another sequel in 2019, this is an innovative idea by the veteran action icon. For the most part, director’s cuts are reserved for critically acclaimed works such as Once Upon a Time in America, Apocalypse Now and Blade Runner. Rocky IV was never intended to be an award winner; it was intended to be a solid piece of entertainment and escapism. Some reviews were scathing, but the film turned in a worldwide gross of $300 million, making it the most successful movie in the series, and that includes the Creed spin-offs. Stallone is immortalized in Rocky IV, preserved in cinematic ice, and this pre-40 version of him is what fans want to see. Wouldn’t it have been terrific if Evander Holyfield could have resurrected a 39-year-old version of himself to fight Vitor Belfort instead of struggling up the ring steps as a 58-year-old and succumbing to a first-round stoppage? If only one could bottle that Hollywood magic dust. Rocky vs. Drago, a fictional matchup that took place one year after Holyfield claimed Olympic bronze, is likely to be a huge success.

The Ring has a special relationship with the Rocky franchise. Beginning with Rocky II, which was released in 1979, all the way up to the fifth installment, which hit screens in 1990, an iconic championship belt is often prevalent. This composite piece actually features a fraction of the design work used for the Police Gazette belt – created in the 19th century as an award for bare-knuckle practitioners – but it carries the Ring Magazine logo, traditional inscribing and colors. Specially created Ring Magazine covers also appeared in three of the Rocky sequels (III, IV and V).