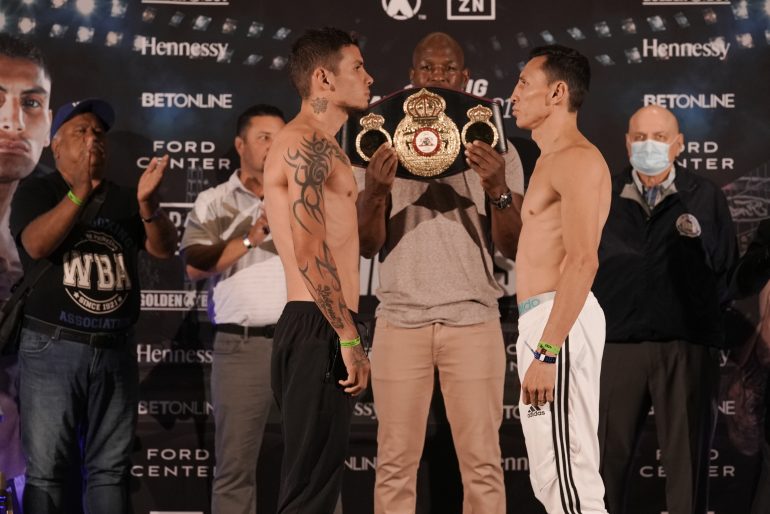 It was billed as the end of an explosive and bloody trilogy, and it delivered on its promise.

In the third fight of a bad blood rivalry that may very well have yet another chapter in the future, Venezuela’s Roger Gutierrez defeated Rene Alvarado by unanimous decision over 12 rounds. It was billed as a title bout, but Gutierrez’s belt is not recognized as a world title by The Ring. The fight was the co-main event of the Vergil Ortiz-Egidjius Kavaliauskas fight in Frisco, Texas.

It was a cautious affair in the early going, as both men know each other very well and wanted to avoid being caught early on. By the fourth round, Gutierrez started finding his range and his timing, landing the best punches of the episode and extending his good streak into the fifth as well.

In the sixth, Alvarado (31-10, 21 KOs) finally caught up with Gutierrez (26-3-1, 20 KOs), landing a few chopping rights that forced the Venezuelan fighter to retreat. In the seventh, both men had gained enough confidence and sense of urgency to start launching big bombs with both hands.

In the eight, Gutierrez found his range with a straight right hand that landed flush several times on Alvarado’s face, and the Nicaraguan acknowledged it by scaling back on his attack and going on a defensive shell for the rest of the round.

In the next two rounds, Alvarado pressed the action and gave a better impression of himself, working behind a long, ramming jab and trying (mostly in vain) to land his looping right hand.

Entering the home stretch, Gutierrez was clearly feeling the pressure and showing signs of the punishment he was receiving, as he was bleeding from a few cuts and trying to score while retreating. Alvarado looked frustrated but undeterred in his fight plan, which was limited to moving forward and impressing the judges by being the more active fighter.

In the last round, with the fight clearly on the line and under the threat of another close decision in the hands of the judges, Gutierrez dug deep and mounted a final assault that proved successful, as he scored more clearly from a safe distance, snapping Alvarado’s head back and opening a nasty gash on his left eyebrow that spurted lots of blood during the last few seconds of the bout.

The scorecards were close but definitive – and for the most part, accurate. Sergio Caiz and Javier Alvarez scored the bout 116-112, and judge Roberto Torres scored it 115-113 (this last one in agreement with The Ring) to give Gutierrez the edge.

In the first episode of their rivalry, Gutierrez had suffered a nasty cut that caused the fight to be stopped by his own corner in the seventh round of a scheduled eight-rounder, with the result counting as a knockout according to California rules. The fight took place at Los Angeles’ Belasco Theater in July 2017.

In the second and most recent episode of the rivalry, Gutierrez scored a razor-thin win by only one point in all three cards, in a fight in which he sent Alvarado to the canvas three times through the bout, which took place in Dallas last January.