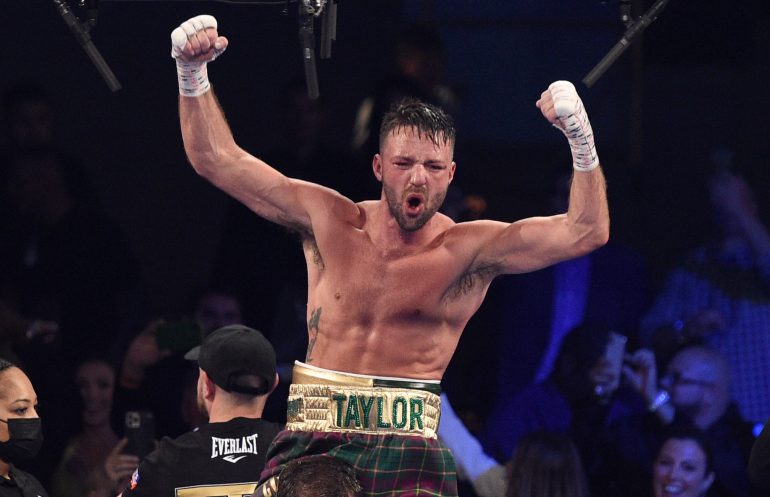 One of them worked in a field picking bell peppers under a suffocating sun with sweat pouring from everywhere. The calluses on his reddish, raw hands were his work gloves. His days lasted so long that he never thought he would survive.

The other once stood in a field, too. His hands were also red. Red with his own blood trying to staunch a gash on the side of his head that he never thought he would survive.

Saturday night their perilous paths collided beneath the gaze of millions, Jose Ramirez, the stoic, proud Mexican-American who picked peppers as his migrant farm working parents did, and Josh Taylor, the brassy Scot who endured bullying as a youth wearing a nasty scar on the left side of his face after getting walloped by a custom-made golf club. 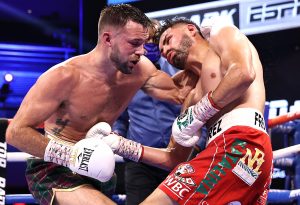 Josh Taylor (L) and Jose Ramirez battle it out in the trenches. (Photo by Mikey Williams/Top Rank Inc via Getty Images)

On Saturday it was, when Taylor (18-0, 13 knockouts) emerged as the first Scottish fighter in history to become the undisputed junior welterweight world champion with a unanimous-decision victory over Ramirez at the Virgin Hotels Las Vegas.

Taylor, the Ring Magazine champion and IBF/WBA beltholder, now grabs Ramirez’s WBC/WBO junior welterweight belts. “The Tartan Tornado” also becomes the first Scot in half a century to be an undisputed champion in any weight class since Hall of Fame legend—and Taylor idol—Ken Buchanan became world lightweight champion in 1971.

Judges Tim Cheatham, Dave Moretti and Steve Weisfeld, all scored it 114-112 for Taylor—with the winning difference being Taylor’s knockdowns in the sixth and seventh rounds. The judges agreed on the first, third, sixth, seventh, eighth, ninth and 11th rounds. Cheatham gave Ramirez the last four rounds while Moretti and Weisfeld gave Ramirez three of the last four rounds. The judges gave six rounds to each fighter, with Weisfeld and Moretti giving Ramirez a 48-47 edge as the fight entered the decisive sixth.

In a fight that had everything, @JoshTaylorBoxer delivered the game-changing moments that helped him secure his place in history. 🏴󠁧󠁢󠁳󠁣󠁴󠁿🌪 pic.twitter.com/IQxbVA9mtE

On being the first Scottish undisputed champions since Buchanan, Taylor said  “I did it just like you! I’ll see you when I get home. Much love. He’s a legend. You gave me so much inspiration to do it, and I’m just like you. See you soon, champ.

“I’ve got nothing but love for Ramirez. This week was no disrespect. It was all part of the mind games to get in his head, to make him more eager to jump in at me and be more aggressive, to use his aggression against him.

“I thought the scorecards were a little tight. I thought they were well wider than that. I wasn’t too happy with the selection of the judges, but I wasn’t going to moan.  I was confident in winning this fight anyway.”

In the opening round, Ramirez (26-1, 17 KOs) went to the body well, though Taylor was the more accurate puncher. By the second, Taylor began establishing his jab. But Ramirez caught Taylor with a left to the body with :34 left in the round, and landed a right uppercut.

Ramirez appeared to warm up in the third round. Taylor used his jab in the opening of the round, but Ramirez closed in on Taylor with a left to the body, which seemed to be an integral part of his game plan. With 2:10 remaining, Ramirez came over the top with a left hook to the head.

“I thought I won the first two rounds,” Taylor said. “His pressure wasn’t anything out of the ordinary that I had(n’t experienced) before. I wasn’t in any trouble. His jab was quite good, when he let it go. He was a very good puncher, when he went 1, 2 and then 3. He was a very good fighter, but he couldn’t time me when I was feinting.”

With just under 2:00 left in the third, Ramirez crowded Taylor against the ropes and strafed the Scot with a combination. Ramirez closed the round with another left to the body. With :21. Ramirez snuck in a right uppercut that caught Taylor.

“I wasn’t close to stopping him (in the third),” Ramirez said. “I’m not going to lie. I felt like I landed some good shots. I did hurt him, but I knew Josh Taylor was well prepared. I knew that fight wasn’t going to end in the third round. I felt like I was winning most of the rounds. His confidence grew after the flash knockdown.

“When I put him on the ropes, I wish I could have done a little more. He was a very good fighter, and I honestly thought he would be a little more aggressive. I felt he was pacing himself and it worked pretty well for him.

“He changed his strategy a couple of times and he was very, very patient.”

Ramirez went on the attack in the fourth, going again to the body. A strange moment occurred in the fourth, when Ramirez turned around and with 1:06 left, Taylor hit him in the back of the head.

Ramirez looked to referee Kenny Bayless for help, but Bayless let them fight. Taylor nailed Ramirez with a left to the body with :33 left in the round, which stunned Ramirez for a moment. 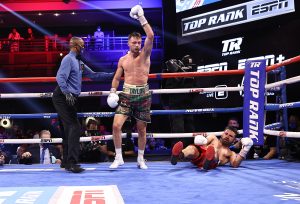 The sway of the fight turned in the sixth when Taylor crashed a counter left on Ramirez’s jaw with 2:53 left in the round, sending Ramirez down to the canvas.

Ramirez got up at the count of two. With 2:18, Ramirez answered with a left hook. Ramirez came back later in the round with a right to the head, but it did not affect the small cut that was dripping a thin stream of blood from the corner of Taylor’s left eye.

Taylor closed the sixth strong, with another left.

With 1:10 remaining in the seventh, Ramirez doubled up with lefts to the body. With :32 left, as the fighters just came out of a break, Taylor created space and unfurled a nasty left uppercut that snapped Ramirez’s head back and floored him a second time. This time, Ramirez was in trouble, getting up on wobbly legs.

“I actually think the referee gave him too much time,” Taylor said. “He’s a very, very tough guy, and I hurt him a couple of times. Hats off to Ramirez. He’s a great person as well, I have admiration for him even more so after that fight.”

As to the break, just before the seventh-round knockdown, Ramirez said, “I thought (Bayless’) job was to break us, because he said as long as you guys clinch, I will separate the guys, both guys step back. I stepped back. He threw an uppercut. When you’re in there, there is a whole different view when you see it from the outside in. For me, I have to look at it that those are things I have to work on; to be a little more careful, and sometimes, be a little more dirty.” 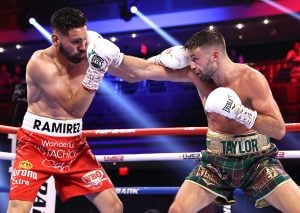 Ramirez (L) battled his way back into the fight following two knockdowns but Taylor was sharper from the outside and controlled the distance. (Photo by Mikey Williams/Top Rank Inc via Getty Images)

Taylor patiently probed. A straight left in the last minute of the eighth snapped Ramirez’s head back.

By the 10th, it started to become apparent that Ramirez would need a knockout to win. Taylor dropped a left to the body, and Ramirez had no answer. In the last :20 of the 10th, Ramirez landed a left-right combo as Taylor was back pedaling, but Taylor crunched another left off of Ramirez’s jaw to finish the round.

“I could have made that fight easier if I kept disciplined a little bit more,” Taylor said. “When he got success was when I put my hands up and closed my guard and let him throw. He was strong doing that. It would have been a harder fight to stand and trade with him, even though when I did trade with him, I landed the better punches.”

Ramirez closed the 11th strong, though Taylor fended off the attack with a shrug.

Taylor kept Ramirez at a safe distance in the early portion of the 12th, and tied up Ramirez each time he came close. Sensing he was up, Taylor was too smart to take any chances. With :17 left, Taylor tied Ramirez up once again.

As the last seconds ticked away, Taylor’s gum shield shown through his mouth as a smile creased his face.

He knew he had made history.

THE DEFINITION OF A WHOLE MOOD!!!!

“I’m just so determined and my will to win is second to none,” Taylor said. “On the lead up to the fight this week, the plan was to get in his head and use his aggression against him. That’s what I did. It worked perfectly all week. I didn’t mean any disrespect or anything, it was all just to get inside his head and it worked.”