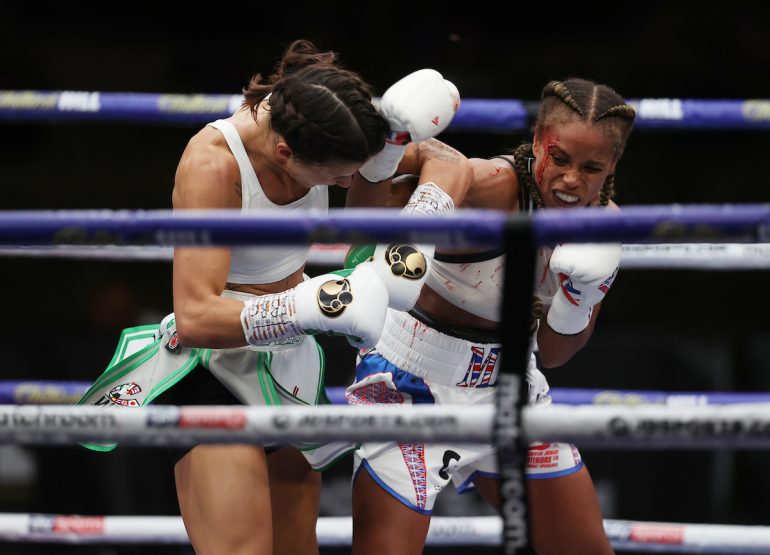 Natasha Jonas has the biggest fight of her life on Saturday but she’s relishing her role as the underdog.

The 9-1-1 southpaw from Liverpool takes on Irish superstar Katie Taylor, who beat her in the 2012 Olympics, but this time the burden of expectation is firmly on Taylor’s shoulders. For many, Taylor is the pound-for-pound best fighter in women’s boxing, she’s the one who is looking to create new records in the sport but that only fuels Jonas’ fire.

“Not at all,” said Jonas, when asked whether she feels the pressure of the big fight this weekend. “I haven’t got to be the person to live up to the expectation or the aura of who she is, so I feel I’m in a good position. I’ve got everything to win and nothing to lose.”

Jonas, 36, doesn’t sympathize with Taylor either, but she’s confident that she has done enough work in training to avenge her defeat from nine years ago.

When asked why she’s so confident of victory, her answer was simple.

“Myself to be fair,” she explained. “Everything I’ve put into training, everything that I’ve done… I’ve had lots of testing done and I knew once the fight was announced that I had to be better than I was for [Teri] Harper and all my testing, my times and stats are better, so I know mentally and physically I’m in a good place and I’m in a better place than I was and that’s what I needed.”

Against Harper, Jonas was in one of the best fights of 2020 which resulted in a draw last August. She and Harper went to war and although Jonas was cut early, her ability to change styles mid-fight has given her more self-confidence coming into the Taylor clash.

“I think the cut in the Harper fight changed our tactics because I had to protect the eye as it was deemed to be caused by a punch but I know I can change my style, there’s a Plan A, B, C, D, to Z if need be,” she said, adding that Taylor is perhaps more vulnerable than many believe.

“I don’t box like [Delfine] Persoon [who’s given Taylor two hard fights] or anything like that but I think Persoon and other fights have shown how human she [Taylor] actually is, everyone thinks she’s some super-human.”

And that means the pressure is off Jonas, and she’s ready to thrive again in the underdog role.

“Every time all eyes have been on me or I’ve been asked to step up I do it and I do it well. I like performing and I pull the performances out when needs be,” she added. 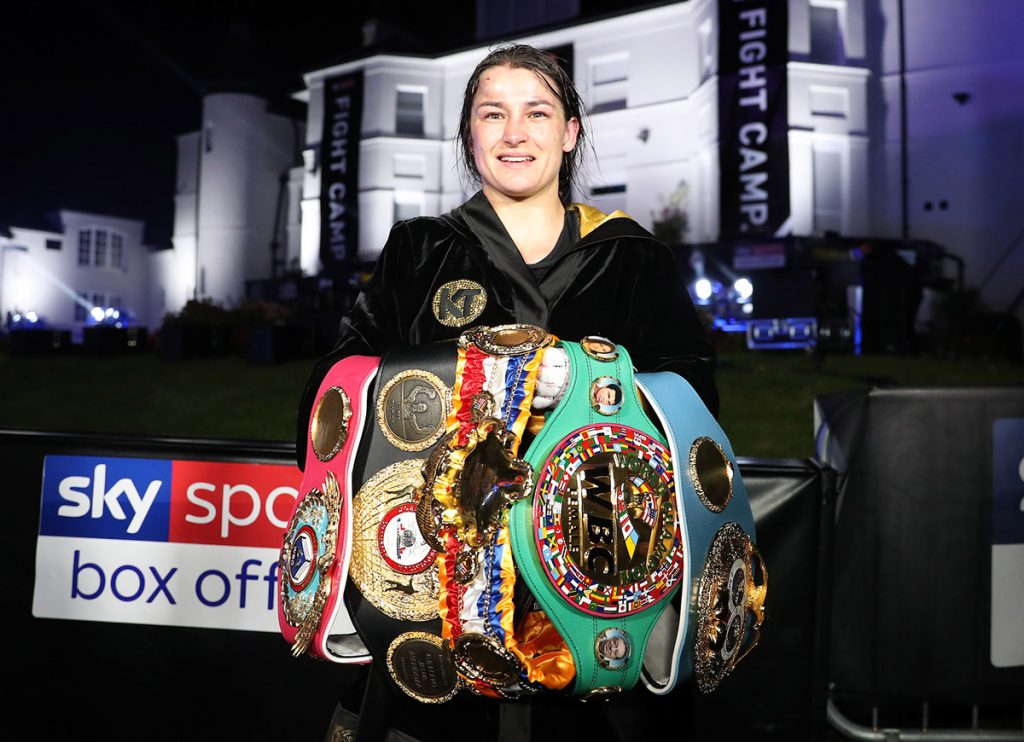 Katie Taylor holds all the marbles in the lightweight division. Photo by Mark Robinson/ Matchroom

Jonas is also bolstered by trainer Joe Gallagher who, while accepting that Jonas is second-favorite, thinks it’s a good spot to be in.

“Natasha is in a great place, physically and confidence-wise and with her performance against Teri Harper… When you sit down and watch Katie Taylor I think people are in love with her and there’s an aura about her and you can’t help that with what she’s done for women’s boxing in Ireland and across the world as an amateur and now as a professional but people seem to forget what Natasha Jonas has done for women’s boxing in England,”

Gallagher explained. “She didn’t start boxing until she was 21, she won five ABA titles, a European medal, a World medal, she was the first one to qualify for the Olympics from England, first one to represent Britain at the Olympics, retired, became a mum and then four years ago came back and turned professional and now she’s fighting for all the belts. I think some respect has to be put on Natasha Jonas’s name after this fight.”

Like Jonas, Gallagher doesn’t think Taylor is as bulletproof as some might think. For Taylor, there’s often talk about the next big name to conquer or the next division, with everyone rolling along on the bandwagon.

Gallagher has seen it.

“I know Katie’s a media darling and everyone loves her, but in her last two or three fights her performances haven’t been the best,” he reasoned. “You could easily say she lost twice to Delfine Persoon if you don’t listen to the Sky commentary. I feel this is about timing now, I feel Katie has been to the well too many times, she’s been hurt in fights and people haven’t talked about it but when you watch and study enough you see things and we see things and I think it’s about timing and Natasha is fully focused on causing the upset on Saturday night. There’s no pressure on Natasha whatsoever. I said to Natasha, when she fought Teri Harper, Sky Bet had her 100-1 to win in any round. I think for this fight it’s 40-1, so there’s no pressure on her. Like Natasha said, ‘I don’t have to hear what Sky say, what the papers say, what fans say, what everyone on social media says, all I know is what I know,’ and she believes she can do it and that’s all that matters. She’s got to go in there on Saturday night and prove that she can do it and she will do it.”

Gallagher reckons it will be a brilliant showcase for women’s boxing and that it will show how much both girls have improved since the London Games of 2012.

“Definitely, last year with Natasha and Teri Harper, their fight was Ring magazine female Fight of the Year, now this is the biggest U.K./Ireland women’s fight there’s ever been,” said the acclaimed coach.

“Obviously there’s a big back story of nine years ago at the Olympics with the highest decibel sounding event [recorded at the whole event] and I know that. I’m not keen on three-minute rounds in women’s boxing but, if there was, I’d love for this to be it because I think the two of them have improved so much in their professional careers and now they’re doing 10-twos instead of four-twos but if there were 12-round women fights I’d have liked this to be 12-twos or 10-threes so they can show what they’ve learned from nine years ago.

“I still feel this is a sprint of a fight again and it’s going to be a great fight and we’re looking forward to it.”

Gallagher is fixing for a busy night in the blue corner. He also has Marcus Morrison taking on Chris Eubank Jr, who is now working with the new Sauerland-Wasserman group and with legendary former four-weight world champion Roy Jones Jr.

Joe admits it’s a big challenge for his charge.

“Of course it is,” he continued. “He’s stepping up and going through the levels when you see what Chris Eubank Jr’s done, obviously he’s fought George Groves in the World Boxing Super Series, James DeGale, the way that he’s performed, he took himself away [to train in the U.S.] but he’s 31 now, that time’s just gone and he’s not 26, 27, he’s got a new team behind him, so he’s going to look to make a statement. For Marcus, I think it’s the eighth or ninth time he’s fought at the arena [in Manchester], it’s a huge opportunity for him and he can punch, that’s the one thing he can do, and with Eubank Jr. we’re not dealing with someone who’s technically sound defense-wise. When he throws he keeps the other hand low, he will present openings for Marcus to land. It’s up to Marcus to be able to land in the fight and if he does land we’ll have to wait and see if he can finish the job, but when someone hits as hard as Marcus Morrison they’ve always got a chance.”

Derek Chisora vs. Joseph Parker, plus undercard action, including Taylor’s undisputed lightweight championship defense against Jonas, will be broadcast live on DAZN in the U.S. and Sky Sports Box Office in the U.K.