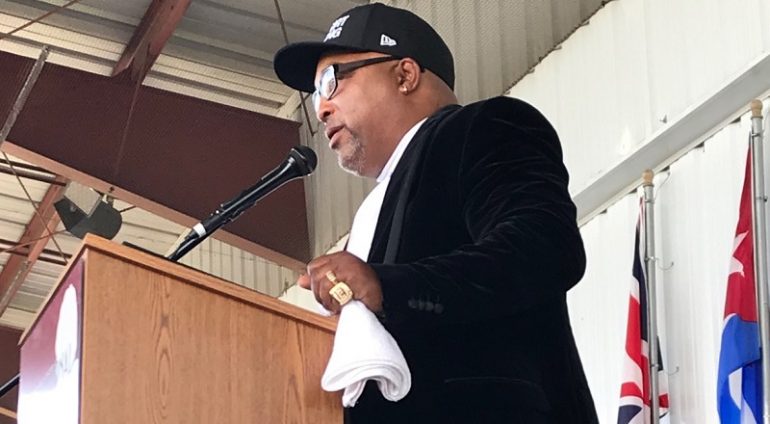 Trainer and former two-division titleholder Buddy McGirt being inducted into the IBHOF. Photo courtesy of the International Boxing Hall of Fame
28
Apr
by Tris Dixon

Derek Chisora has been around and done almost everything.

But for Saturday’s fight with Joseph Parker he’s drafted in an extra pair of eyes in the form of two-weight world titleholder and Hall of Famer Buddy McGirt.

Chisora can be temperamental but McGirt has been impressed with what he’s seen.

“He’s a great guy to work with, he’s an all-round great guy and I have no complaints,” said the American coach. “The guy’s done everything asked of him and then some and now it’s a matter of putting it all together on Saturday night. I’m going to be honest, I never saw Derek fight [before he started working with him]. My thing is, it’s obvious he’s set in his ways. You’re not going to change anything, you’ve just got to smooth off some of the rough edges and remind him of the things he can do and that he’s not doing enough of. You might be able to do it for one or two rounds but no, we’ve got to do it for 12 rounds. It’s about keeping him focused on the task at hand.”

Chisora has seemed to switch off in fights and McGirt recognizes that as a problem. At the age of 37 and with a hard 32-10 career behind him, Chisora needs to make the most of every last chance he gets. Perhaps that’s why he has brought in McGirt, leaving nothing to chance.

McGirt initially flew to England for a meeting with Chisora a couple of months ago. They talked, McGirt took the heavyweight contender on the pads and he watched him spar.

It’s fair to say Buddy has focused more on what his man is doing than what Parker brings to the table.

“I’ve never seen Joseph Parker fight, I’ve seen clips,” admitted McGirt. “He’s a very good boxer, he’s very smart and I know he’s going to try to outbox my guy. I’m not mad at him for it. I’m not expecting him to stand there and try to bang – it would be nice – but our goal is to get him in to a fight, we’ve got to try to mug him and make it a down and dirty fight. We’re not going to outbox him, that’s obvious, so we’ve got to get him in the trenches.”

A concern for Chisora will be that the hard fights eventually catch up to him, or that he gets old overnight. McGirt knows all too well that it can happen to a fighter who is up there in years.

“You know, listen, so far he hasn’t, so if he does hopefully it’s after Saturday.”

Parker’s new trainer, former middleweight titleholder Andy Lee, said this week that Chisora – on his best day – sits just outside the world’s top three heavyweights in Tyson Fury, Anthony Joshua and Deontay Wilder, but McGirt reserved the right to say where Derek sits in the world scene. He lost his last fight on points to former cruiserweight king Aleksandr Usyk.

“I’m just focusing on Saturday, after Saturday I’ll answer any questions pertaining to that,” said McGirt. “But now my focus is on Joseph Parker and that’s what my focus had been on since I’ve been here.”