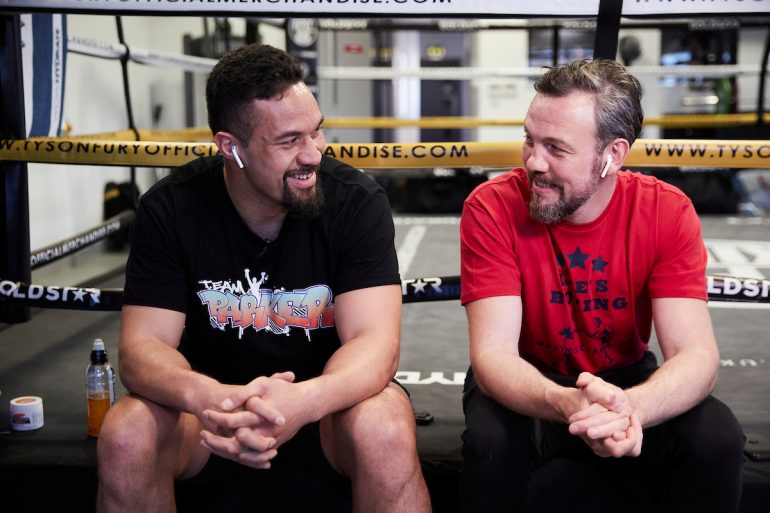 Lee has been with Parker for several weeks after the former WBO heavyweight champion split from former coach Kevin Barry. Parker and Lee had an early spell in Dublin and then headed to Morecambe, England, where they trained with Tyson Fury for a fortnight before The Ring’s heavyweight champion flew to Las Vegas.

It was Fury, who has Lee in his own camp, that put Parker in touch with the former middleweight titleholder.

“Tyson phoned me,” explained Lee. “Joe phoned Tyson for advice looking for a new trainer, then Tyson phoned me and me and Joe spoke on a Zoom on the Friday, and then he was in Dublin on the Wednesday and we went to the gym.”

And they went to work. It’s been a busy camp as 29-year-old Parker looks to add to a skillset that has seen him win 28 of his 30 fights.

Lee has liked what he’s seen.

“He’s good at everything in boxing and out of boxing… the guitar, the piano, dancing, he can do it all,” said Andy. “He’s naturally gifted and he’s quick when it comes to getting things off, learning things and understanding things – so he’s been easy to work with. He’s done everything I’ve asked of him and committed to what I thought was the right thing to do, so hopefully it has good results.”

Parker’s two defeats came in two previous U.K. visits, against Anthony Joshua and Dillian Whyte in back-to-back fights but he was the first man to beat Andy Ruiz, too.

“He’s got a lot more potential, considering he reached the heights he did,” Lee continued. “I don’t want to criticize his former trainer but everyone can always do better and small adjustments can make a big difference, especially someone who is already quite proficient at what they do. It’s changing small things, weight distribution, keeping him focused and making sure he works on concentration, not having any lapses during the round, how he punches, learning to use his shoulders more and how he steps in with his punches and how he transfers his weight when he punches. Those are always basic, small things but they aren’t things a lot of people do correctly. You’d be surprised.”

Chisora had two thrillers with Whyte but lost both, yet he comes to fight and has become a cult figure in British boxing. Lee is ready for Chisora to come out firing from the start, setting a frenetic pace and trying to make Parker uncomfortable from the off.

“I’m expecting a war,” added the Irishman. “It’s been a while since he [Chisora]’s been an off-color Chisora. Of late he’s been coming for war and that’s what we’re expecting and if anything he’s gotten better at what he does. If you watch him fight [Kubrat] Pulev to now he’s a different fighter, really, he’s a lot more intense. He’s fighting like every fight is his last and that makes him a dangerous opponent. Chisora is a top heavyweight, he’s only really lost to the best guys out there and even though he’s coming off a loss it’s a loss he got a lot of credit from and some people even had him winning the fight [against Aleksandr Usyk]. Outside of the top three guys [Tyson Fury, Anthony Joshua and Deontay Wilder] on his night he can beat anybody, so Joseph knows he has to beat him to show he belongs in the top bracket of heavyweight contenders. If he doesn’t beat him, it’s a long road back.”