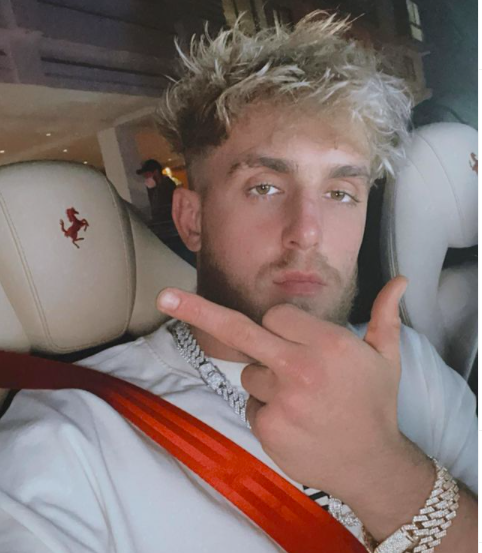 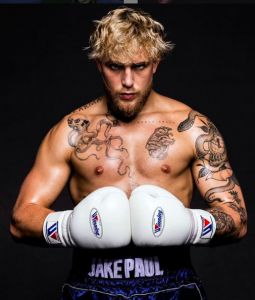 Paul is no fool, he can promote. He’s grabbing attention ahead of his April 17 PPV fight.

Young Jake Paul is a pot stirrer extraordinaire, that is generally acknowledged even by people who dismiss him derisively as a “YouTuber” who is in over his head as he tries to transition into the pugilism sphere.

Some of you are not much aware of the 24-year-old Paul other than knowing that he’ll fight in the main event of an April 17 Triller Fight Club promotion, against Ben Askren, a 36-year-old mixed martial artist.

Paul is doing his level best to get on all the radar screens of boxing fans, excelling in the “agent provocateur” role while sparring on social media with UFC figure-head Dana White.

TMZ is all over it. On Wednesday, the news and gossip purveyor reported that White on Mike Tyson’s podcast said he’d be willing to bet $1 million that Ben Askren will defeat Jake Paul on April 17. 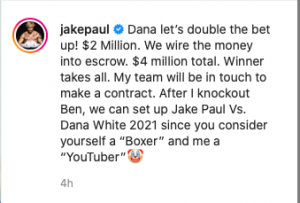 “After I knock out Ben, we can set up Jake Paul Vs. Dana White 2021 since you consider yourself a ‘Boxer’ and me a ‘YouTuber.'”

And now, the offer gets sweetened.

Triller boxing boss Ryan Kavanaugh is of the belief that Paul’s progress as a pugilist is so impressive that he’d like to put his money up to prove how highly he thinks of Paul. “We’re calling Dana White out officially,” Kavanaugh told The Ring. “Triller, Snoop Dogg, me, and Bobby Sarnevesht will bet $10 million that Jake will win.”

Then, a step further. Triller is keen to promote a Jake Paul vs. Dana White fight.

“Typical boxing rules, six rounds, or more, three-minute rounds,” Kavanaugh suggested. “We challenge Dana to fight Jake, on a Triller Fight Club card, anytime this year. Dana can name the weekend. It can be a collaboration, we can do it on Triller, and then on the UFC platform.” And, he said, Team Triller will put up ANOTHER $10 million and put it behind Jake Paul to beat White, the 51-year-old Las Vegas resident. “We can figure out how to co-promote it on Triller and UFC.” 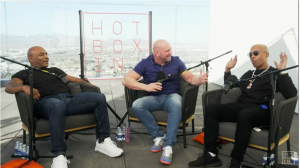 Kavanaugh has heard the talk over the years of White maintaining he’s fought plenty, in so-called “smokers” back in the day, so he’s hopeful that isn’t just resume boosting.

The L.A.-based mogul is hopeful White, who has teased showing off his supposed fighting skills before, might feel comfortable in taking on a physical challenge like this. “We’ll do the $10 million bet, Jake vs. Askren, and the money can go into escrow,” Kavanaugh said. White can prove the depth of his belief in Askren by accepting the larger stakes, and then show his roster of fighters that he’s willing to take some of the same risks they accept when they do battle.

Snoop Dogg also swooped in and offered The Ring a soundbite. “Is Dana White man enough to put his money where his mouth is? Jake Paul will win.”