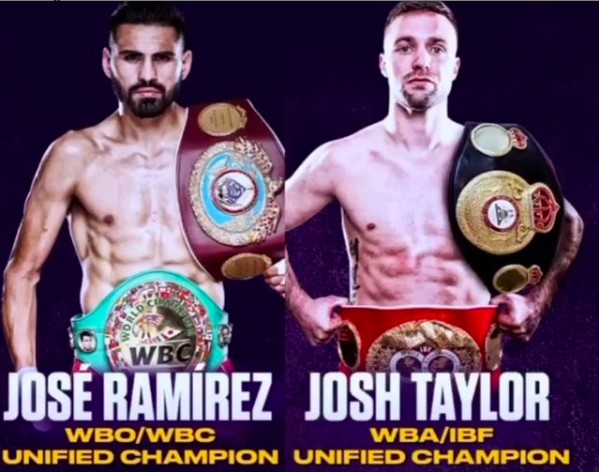 May the 8th was setting up to be too crowded of a night for boxing, so the powers that be, including Bob Arum, saw the light, and broke up the logjam.

Canelo Alvarez will meet Billy Joe Saunders on Saturday, May 8, gaining some buzz from the Cinco De Mayo weekend euphoria, on a card put together by Eddie Hearn’s Matchroom, if things go to plan.  And a card topped by a clash pitting 140 pound titlists Jose Ramirez and Josh Taylor has been moved off May 8, and will slide to another date.

Mike Coppinger aka “Mikey Sources” reported on The Athletic Friday of the date shift, and promoter Bob Arum, whose Top Rank will promote the junior welter consolidation tussle, told RING that it’s true. He didn’t supply the new date for the battle between the WBC and WBO title-holder Ramirez, a Californian, and the IBF and WBA strap-holder, the Scot Taylor, both of whom are part of the Top Rank squad.

“Sources” Tweeted out the news, and attached a lil barb, saying, “For once boxing did the right thing.”

Arum didn’t tell me he saw the Tweet, so I don’t think he was actually reacting to the characterization that boxing doesn’t customarily do the right thing when he started talking about the state of the game, from his POV seat…. 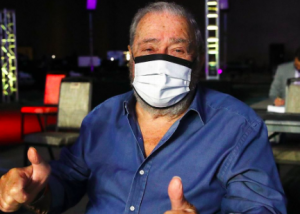 Bob Arum ringside for a Bubble event. He told RING that he’s fine with fighters putting off fights longer, when spectators can safely watch the bout, and make the revenue pie larger. (Photo by Mikey Williams)

“He was correct,” Arum said. “It just shows that Canelo is so important, and it didn’t matter to us. We talked about it with ESPN, and everyone agreed that was fine. Listen, we have no problem doing fights with Golden Boy, they have no problem doing fights with us, and on whatever platform makes the most sense, we do it. (Golden Boy has a content deal with DAZN, Top Rank with ESPN). Same with Eddie Hearn, at times there’s less cooperation, but there’s cooperation. Al Haymon, it’s a little more difficult, but I have no problem with Haymon fighters. There’s no problems…The problem is the pandemic.”

You have noticed that there hasn’t been that flood of activity, of fights being made and announced, to take up the first quarter, and into the summer. Arum explained why, from his stance. Fighters and managers tell him what they think a fight is worth, and he said that their calculations are based off a construct that isn’t now in play.

“Spectators, PPV, closed circuit sales, those aren’t available,” he said. “And pay per view, we know our research shows that a lot of people get it and have parties, at their house, and in the pandemic, that’s not possible. Fighters look at it from a different paradigm, like everything is going full blast, or almost full blast, and that’s not the case!  If it’s a good PPV fight, we could make the fight, they  can say ‘it should be worth double the money,’ that’s based on past practices, including the gate. That’s not there, till the pandemic is over, til people are all vaccinated and it’s back to normal it won’t be there. It affects all promoters. (So people talking about Bob Arum not being willing to do deals with Al Haymon), it has nothing to do with Haymon, it’s the pandemic. If you’re a fighter, you’re reading all this stuff, and they say, ‘I’m not fighting for this money.’ What’s their alternative? Wait a little bit, until the pandemic is over. In their mind, then, maybe it’s, ‘Why take X dollars if I can get X plus 25%’ or whatever. My point of view is, you’re asking for this, maybe it’s reasonable, maybe it’s not reasonable, but in six months then maybe it’s more reasonable. It’s their choice.”

He explained more of why we’re not seeing such a robust first quarter of fights. “Nobody is stupid, Oscar’s not, Haymon, Eddie’s not stupid, all of them are slow walking because we got to get robust spectators,” Arum said.  “And the better the fight the more spectators are there to contribute to the overall pie. So you’ll see fewer fights in March, April, May, and you’ll look more at June, July, August. ESPN are experts at this, they’ve had the big properties, college football, basketball, they adjusted well, and they work with us very, very well. It’s not like we’re in a vaccum, and people don’t realize we’re in the time of COVID.”