Canelo Alvarez to fight Avni Yildirim on Feb. 27 on DAZN

Unified super middleweight world champion Canelo Alvarez, boxing’s pound-for-pound king and the sport’s biggest star, will fight for the second time in a little over two months when he takes on mandatory challenger Avni Yildirim on Feb. 27, multiple sources told The Ring on Wednesday.

The fight is expected to be announced on Thursday. It will be the first of a two-fight agreement between Alvarez and Matchroom Boxing promoter Eddie Hearn, with the second fight, assuming Alvarez defeats Yildirim, likely to be a unification fight with England’s Billy Joe Saunders on May 8, which is Cinco de Mayo weekend, per the sources.

Alvarez-Yildirim will air on DAZN as well as via pay-per-view and take place at the 80,000-seat Hard Rock Stadium in Miami — home of the NFL’s Miami Dolphins and the University of Miami Hurricanes football team — where a limited number of spectators will be allowed, according to sources. As of Wednesday evening, Matchroom Boxing and stadium officials were working on the final details of the site agreement, sources said. 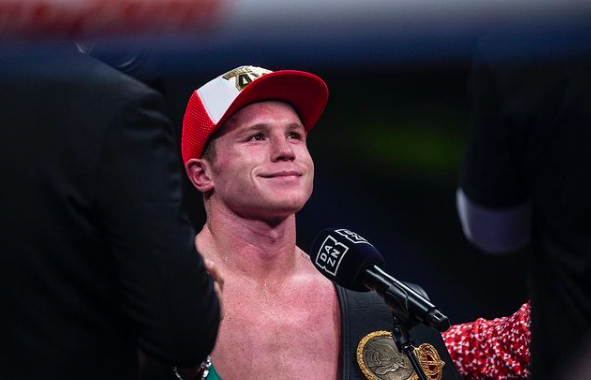 Canelo schooled Callum Smith Dec. 19, and came away unmarked, so he was able to look to book another bout quickly.

“Tomorrow all the details of my next fight,” Alvarez wrote on social media on Wednesday.

Alvarez became a free agent from longtime promoter Golden Boy and DAZN in November after they settled a breach of contract lawsuit he filed against them. Once free, Alvarez quickly made a one-fight deal with Hearn.

The fighter returned to DAZN for that fight on Dec. 19, winning a one-sided unanimous decision – 119-109, 119-109 and 117-111 — over the Hearn-promoted Brit Callum Smith to win The Ring and WBA super middleweight world titles, as well as the vacant WBC 168-pound belt in front of about 15,000 fans at the Alamodome in San Antonio.

Yildirim, who is the WBC mandatory challenger, stepped aside to pave the way to allow Alvarez-Smith to be for the belt and was promised the next shot against the winner.

Alvarez (54-1-2, 36 KOs), 30, of Mexico, who has won world titles in four weight classes from junior middleweight to light heavyweight, had hoped to fight in his hometown of Guadalajara against Yildirim but that was ultimately ruled out because there would not be spectators allowed due to regulations there related to the coronavirus pandemic.

A return to Texas was also explored, according to sources, but with the state also shut down again to crowds until at least March, it left Florida as a site where he could at least have some fans in attendance.

The 29-year-old Yildirim (21-2, 12 KOs), of Turkey, has lost both times he has faced a top opponent. In 2017, Chris Eubank Jr. knocked him out in the third round in Germany and in his most recent fight he lost a 10th-round technical decision to Anthony Dirrell for the then-vacant WBC super middleweight world title in Minneapolis in February 2019.

In the seventh round, Dirrell suffered a cut over his eye from an accidental head butt. In the 10th round, it was decided that Dirrell could no longer continue because of the worsening cut, so the fight was stopped and sent to the scorecards, which had Dirrell ahead, 98-92, 96-94 and 96-94.

The fight will be Alvarez’s second in Miami. In his second fight in the United States, Alvarez knocked out Raul Pinzon in the first round at the Miccosukee Resort in December 2008.