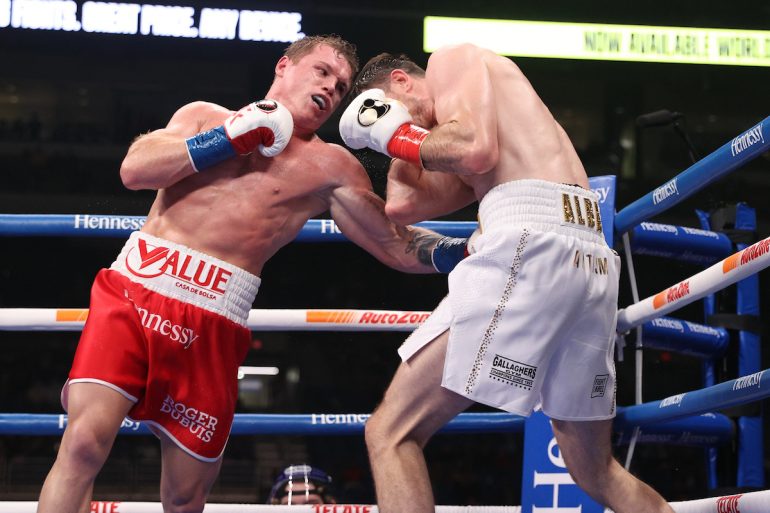 Canelo's near shutout of Callum Smith (promoted by Matchroom Boxing and streamed live on DAZN) was his first bout as free agent. Photo by Ed Mulholland/Matchroom.
19
Dec
by Ryan O'Hara

SAN ANTONIO — In a career driven by making boxing history, Canelo Alvarez secured another piece of it on Saturday night, and he did it with ease.

Alvarez dominated Callum Smith over 12 rounds to take his WBA and Ring super middleweight world titles in a unanimous decision rout before a socially-distanced crowd of 11,423 at The Alamodome in San Antonio, Texas, to officially become a four-division champion. The Mexican star also picked up the vacant WBC title.

Judges Steve Weisfeld and Rafael Ramos scored it 119-109, and Steve Morrow scored it 117-111, all for Alvarez, who notched his 13th consecutive victory.

Alvarez, the reigning middleweight world champion and boxing’s biggest star, had not fought since last November when he moved up 15 pounds and two weight divisions to knock out Sergey Kovalev in the 11th round to take his light heavyweight title in Las Vegas.

But much has changed over the last year.

Alvarez split with longtime promoter Golden Boy Promotions just a month ago following a decade-long partnership. He also split with DAZN, with whom he previously signed a $365 million contract to join the streaming service in October 2018.

But if 2020 did not have enough entanglements and confusion, Alvarez secured a one-fight deal with DAZN just over a week after settling a massive lawsuit between both parties, with Alvarez initially seeking damages in excess of $280 million.

But despite all of the disorder surrounding him this year, Alvarez made it clear that his motivation was not one based on money, but on returning to the ring against a marquee opponent.

The sweepstakes came down to two undefeated super middleweight champions. After a deal with Caleb Plant fell through, Smith was the big winner.

Smith entered the fight looking to settle a score with Alvarez as well. His older brother, Liam, a former junior middleweight titleholder, was knocked out by Alvarez in a September 2016 title fight.

However, his path to revenge was ultimately negated by Alvarez, a prolific body puncher, who did what he did best, making his opponent fight his fight, and walk them down in the process.

According to Compubox punch statistics, Alvarez landed 209 of 484 punches (43 percent), while Smith threw more, but struggled to land shots all night. He connected on just 97 of 536 punches (18 percent). 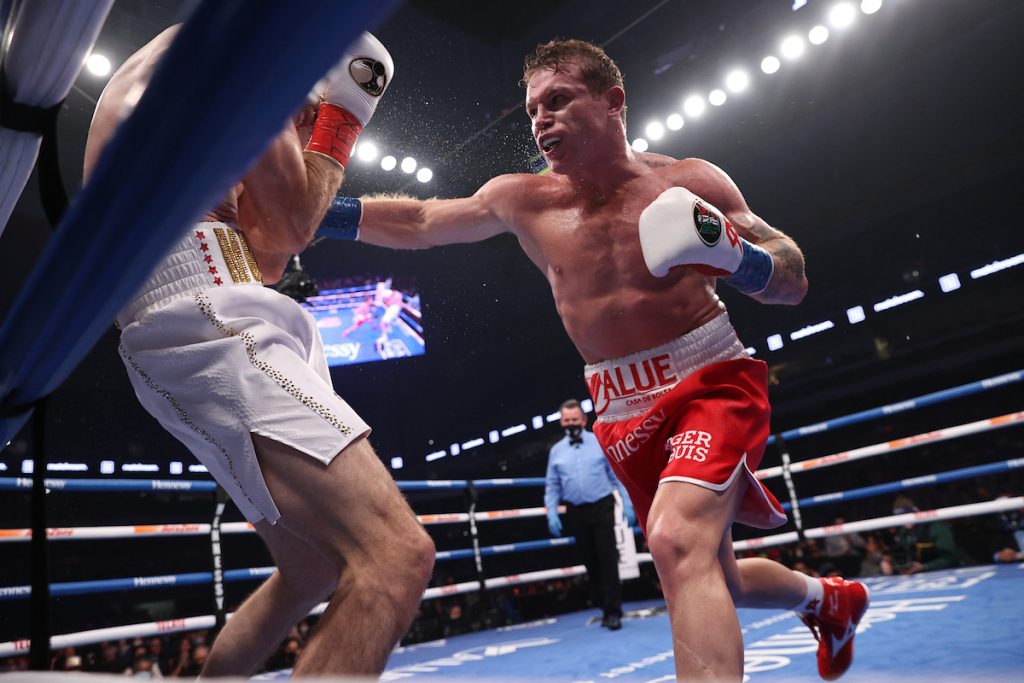 Alvarez, who would like to eventually usurp Julio Cesar Chavez as Mexico’s greatest boxer, did something that no other Mexican has done. The 30-year-old became just the fifth fighter and the first Mexican in boxing history to win Ring world titles in three weight classes. The others include Henry Armstrong, Sugar Ray Leonard, Manny Pacquiao, and Floyd Mayweather Jr.

Of those fighters, Armstrong, Leonard, and Mayweather are International Boxing Hall of Famers, with Pacquiao and Alvarez both surefire candidates to eventually join them.

“I’m the best in the world,” Alvarez said. “Since the first round, I tried to see what he brings, the skills or whatever. But like you see, I showed what I am.”

When the fight finally began, Alvarez and Smith fought at a measured pace — with Alvarez looking for a way inside against the taller man, and Smith (27-1-1, 19 KOs), of Liverpool, merely trying not to get hit.

Late in the opening frame, Alvarez connected with a one-two combination and a series of jabs that snapped Smith’s head back.

Alvarez is known for his ferocious body attack, and he got it going in round two. He connected with a left hook that backed Smith into the ropes. Later in the frame, a stiff jab from the challenger stung Smith against the ropes.

Following a slow start, Smith woke up in the third round. The Englishman landed with a right hook downstairs and also mixed it up up top with the right.

It was all Alvarez in the fourth. He connected with a one-two combination that hurt Smith.

The one-sided display continued into round seven as Alvarez bothered Smith with a hard right uppercut that backed him into the ropes.

Smith, who came into the fight undefeated, appeared pretty defeated in the eighth round, sporadically throwing as Alvarez battered him against the ropes.

Late in the frame, Alvarez landed another right uppercut that sent sweat flying from his forehead.

Alvarez momentarily stunned Smith with a huge right uppercut in round nine that forced him to hold. The 30-year-old then followed up with a right hand that sent Smith soaring into the ropes.

In the 12th round, Alvarez walked Smith down, landing solid jabs and right hands, as he cruised to yet another victory.

“I’m devastated,” Smith stated. “Listen, I never wanted to lose. I come here to win. It just wasn’t my night, a few little things. Listen, he was good tonight. Fair play to him. I had a sore [left] arm – he kept hitting me in it. But yeah, no excuses. I think I may have outgrown the weight. I don’t feel as dominant at 168 as I used to be. But listen, no excuses – he is very good.”

In the chief support bout, Marc Castro had a successful pro debut, knocking down Luis Valdes twice en route to a third-round knockout.