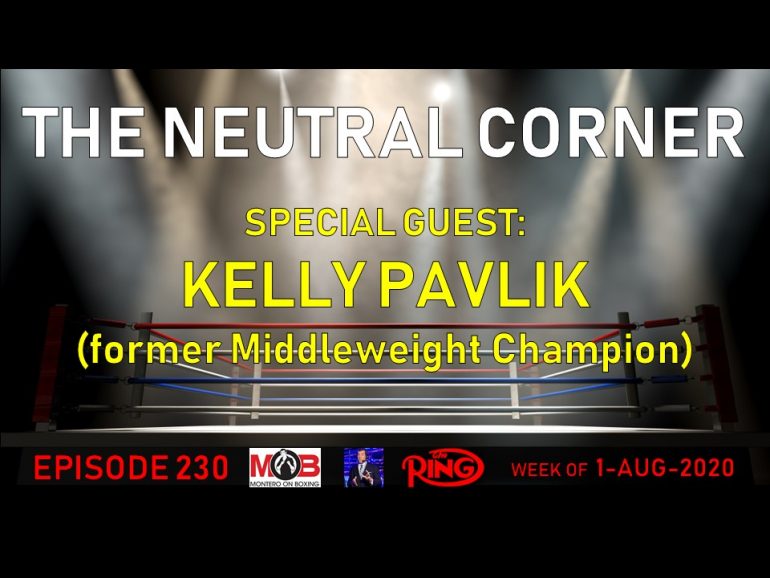 On episode 230 of The Neutral Corner boxing podcast, host Michael Montero reported on the sad news of boxing trainer Willie Savannah passing away at 85 years of age. He also opined on the upcoming exhibition fight between Mike Tyson and Roy Jones Jr. The former greats will face each other on September 12, the weekend of Mexican Independence Day, a fight date normally reserved for Saul “Canelo” Alvarez. Where does this leave the Mexican superstar?

Later on, Montero was joined by former middleweight champion of the world Kelly “The Ghost” Pavlik (40-2, 34 KOs). When asked about how the boxing business has responded in the face of the global COVID-19 pandemic, the former champ was fair and optimistic.

“I think they’re doing what they can do,” he said. “There were a lot of guys sitting around because a lot of gyms were shut down. It was a hard situation overall. For a while nobody knew what was happening. Now I think things are picking up. Showtime has some good match ups coming up.”

Pavlik is split on all three match ups. “(Jeison) Rosario can fight, it’s going to be a test (for Jermell Charlo),” he said. “And Derevyanchenko is no joke, he’s one of those fighters that’s slept on the most. Charlo-Derevyanchenko is a pick ‘em fight. Regarding Davis-Santa Cruz, if Tank comes in looking the way he did in his last fight against Yuriorkis Gamboa, I don’t know. Leo is big and tall and rangy, and he throws a lot of punches per round.”

Montero later reviewed all of the action from last week, including wins by Oscar Valdez, Vergil Ortiz Jr and Joe Joyce. He also previewed this week’s schedule, which includes the return of Wisaksil Wangek in his native Thailand against veteran Amnat Ruenroeng, Sam Eggington vs Ted Cheeseman on DAZN, and Stephen Fulton vs Angelo Leo on Showtime.

Mark from Ireland gave his picks for the weekend. “Rungvisai will win the first five rounds against Ruenroeng and then stop him, probably off a right hand,” he said. “(Ted) Cheeseman cracks the Egg (Sam Eggington) in rounds five through seven, and Fulton wins a unanimous decision against Angelo Leo.”

Ace called in to express his opinions on a potential matchup between WBC junior lightweight titleholder Miguel Berchelt and Oscar Valdez, who became his mandatory with his win over Jayson Velez last week in Las Vegas. He feels the fight would be much more competitive than many predict. “Berchelt has the resume, he’s faced better opponents, but Valdez has the heart and the chin. Sometimes Berchelt throws some wild punches that can be timed and caught.”